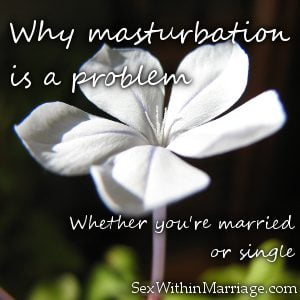 There are three basic reasons why I think it’s a bad idea.  One theological, one physiological, and lastly, one psychological.

So, let’s get this one out of the way first, because it’s likely to cause the most arguments.  As people are thrilled to point out, there are no verses in the Bible dealing with masturbation directly.  Yeah, I’m perfectly willing to admit that.  I find it a strange argument, since Christianity is rife with things that are not directly spoken of in the Bible.  Some I believe are correct, like the Trinity, some I believe are incorrect, like child baptism, keeping Sunday instead of a Saturday Sabbath, and ordination (just to step on everyone’s toes equally).  Something being spoken of directly, or not, in the Bible doesn’t seem to be a case for doing or not doing something.

Instead, what I think we should do is look at the aggregate and see what that points to.  And so, in the Bible I see healthy sexuality as something that is shared, shared only with one’s spouse, and must be carefully guarded in order for it not to become a sin.

Ultimately, I believe our sexual experience is a precious thing, and intimate thing, and something that is intended to be shared with our spouse, and them alone.  When you exercise your sexuality without your spouse, you cheapen it, you dilute it.  You make the experience with your spouse less special.  Less unique.  But, that’s my opinion based partially on the physiological reason.

Yes, sharing sexual activity with your spouse is first and foremost about the emotional and spiritual connection.  It isn’t just physical.  There IS a bond that occurs when you have sex with someone, even if you aren’t married to them! (1 Cor 6:16)  It is called “pair bonding” and it fuses your soul together with someone.  This is why sex isn’t to be taken lightly.

But that is if you are engaged in the sex act with another person.

So, your brain sees this and recognizes that you can get this dopamine and oxytocin with a lot less expenditure of resources.

For single people, they get used to this.  There’s no one else to worry about, there’s nothing to compare it to, and so many get years of training their brain to be used to having sex on their own.  As a result, we have a lot (and I mean a lot!) of sexually selfish newlyweds.  Don’t tell me they don’t exist, because I get emails from their spouses regularly.

There’s also the concern that you can train yourself to only be able to orgasm from your own methods of self-induced orgasm.  More and more men are finding when they get married that they can’t orgasm from sex.  For some, they’re just unused to a partner.  For others, they’re used to a firmer grip than a vagina can realistically offer.  For others they say “it’s too wet”.  I get emails from all these types, and from their new wives who are devastated, thinking they are the problem.  Now, women often have the same struggle, but since the female rate of orgasm from intercourse is so low, it’s hard to say what’s from masturbation, and what’s from other influences, or even just natural.

Now, physiological patterns can be overcome with time.  People do it.  They learn to enjoy sex; they learn to appreciate their spouse.  Honestly, it usually doesn’t take that long learn (though it can).  The bigger risks, I think, are the psychological reasons.

And many listen.  They resign themselves to that, because that’s what their spouse wants.  They give up and just say “yes dear”, and off they go.  Now, it’s marginally better than having your spouse tell you to go have an affair, but not by much.  It still is the same message.  I don’t care enough about you to be your sexual partner, go be your own partner.  It’s reminiscent of being told as a kid “Go play by yourself, I don’t want you as a partner”.  Except, it hurts more, because this is from someone who promised to always be your partner, until death, and because sexuality is such an intimate and private thing.  This stabs at our core.  It’s sexual, and emotional, abandonment.  And worse than that, it’s manipulative, because they trick their spouses into believing that masturbating is ultimately selfless, because it puts less strain on them, when in fact, it’s a synthetic, a bad copy, a counterfeit to what marriage and sexuality should be.

Because, I believe it’s based on solid biblical principles (even if not a direct, specific verse), because of how it affects your brain, your body, and because I’ve seen too many marriages hurt by the practice, and I’ve seen too many healed by stopping.  I’ve even had interactions with couples who say they don’t mind that their spouse masturbates, but by the end of our conversations, they’ve realized that it’s been making them selfish, that it’s been detracting from their relationship.  They go on to find a new level of relationship they weren’t able to get to before, because they weren’t 100% focused on each other sexually before. 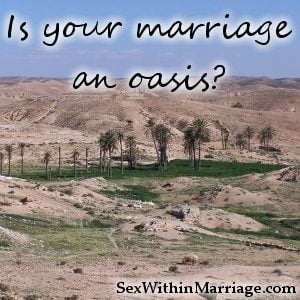 Is your marriage an oasis?
>