This week I got an email from one of my regular readers.  Here’s the basic backstory: I found your blog in spring of 2014 when I was 35 weeks pregnant with my third daughter and I couldn’t figure out why I felt so hurt catching 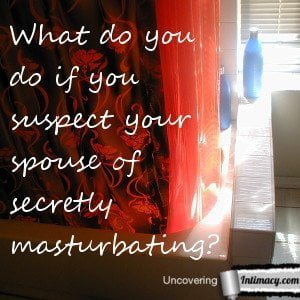 This week I got an email from one of my regular readers.  Here’s the basic backstory:

Well, here we are two and a half years later and I suspect he is still doing it. Or has started again? It is admittedly just an educated guess, but I don’t believe I am making it up. Still I really don’t want to be *that* wife who suspects her good-willed husband of doing something wrong all the time. I can explain why I suspect it, if you’d like, but I suppose it isn’t relevant, because whether he is or isn’t, I obviously need to talk to him about it because it is eating away at me.

If he isn’t, then I clearly have some leftover trust issues from before that I need to work through with him. But if he is, then I want to get to the bottom of it.

I was just going to respond by email, but she gave permission to respond publicly.  So, I’m going to, in case it helps some others.

Realize that it’s a suspicion

But if he is, then I want to get to the bottom of it, because it isn’t a lack of sex; we are having sex every two to three days right now.

So, the ultimate question she poses is this:

How do you bring this up with your spouse?

That’s the tricky part.  Communicating about this is difficult.  For one, whether the suspicion is true or not, the potential for pride to come up on either side is huge.  For a “perfect” conversation, both sides need to feel safe and need to be willing to act in humility. That’s never easy.

One way to foster this sort of context is to be clear that you are asking out of love.  This reader does a good job of framing it that way in her email.  She writes:

I do not want him to feel attacked; no, I am deeply concerned for him. Whatever it is he is struggling with, he is struggling enough that he is willing to continue doing something that he knows I consider a betrayal of trust, so it must be a big deal, even if he isn’t aware of it. It is just not consistent with his character to continue to do something that he knows hurts me.

That’s the mindset you have to have.  “This is hurting me” is still important, but “I’m concerned for you” should be primary.

Another concern, which she brings up, is timing.  When do you do this?

Let them pick a time

There are a couple schools of thought in this, and I think it depends on the spouse.

The first is to let them pick the time.  You approach them saying something like

That’s it, then let them pick a time.  Of course, they may never come back with one. Then you have to have a second short discussion that goes more like

I really want to talk about this.  Could we pick a time now to discus it in the future?

Ultimately, if they still balk, the next discussion goes something like this

I’ve booked a time with our pastor so we can discuss this.  We have a meeting at 6pm on Thursday.  I’ll be going to talk about it either way.  I hope you’ll join me.

That last option should be avoided, if possible, but sometimes its necessary. It clearly sets the expectation that you need to talk about it. That you’re bringing in a neutral third party (the pastor, or whomever you choose). That you’re having a conversation about it to work through the issues. That that conversation will happen whether they are there or not.

Talk about it after sex

Now, everyone suggests never having conflict discussions in the bedroom.  I’ve seen it everywhere from counselor, pastors, therapist authors and bloggers.   The idea is that you don’t want to attach negative emotions with the place you have sex.

I disagree.  This makes sense if conflict is a bad thing to be avoided.  However I firmly believe that conflict is healthy, even required, for growth.  For myself, I find the best time to have difficult discussions is after sex.  Here’s why:

The only downside I see is that many people get sleepy after sex.  But, I think you can push through that.

So, there are two options.  You decide what timing is best for your marriage.

If you make an accusation, and you were wrong, you had better apologize.  Even if framed compassionately, it’s still an accusation. You just broke trust, and that needs to be repaired.  It also needs to be dealt with.  If you’re suspecting your spouse wrongly, then there is already a broken trust in the other direction.  Whether the suspicion is “justified” or not.  Perhaps there are things you can change to let that trust repair.  Either way, it starts with a conversation.

I hope that helps my reader, and anyone else who might be in the same position.

<
6 things that stop people from forgiving

Why you don't feel God's presence in your life
>