I received an anonymous email last night: How is it that my husband is the lower drive spouse and yet occasionally masturbates without me? He always regrets it and admits it to me afterwards, yet it still happens about once a month. We have sex

How is it that my husband is the lower drive spouse and yet occasionally masturbates without me? He always regrets it and admits it to me afterwards, yet it still happens about once a month. We have sex less than once a week – maybe 3 times a month – and I almost always initiate, though he always enjoys it when we do have it. It hurts me because I would LOVE to have more sex, but he doesn’t want it, yet somehow he still feels the need to have sex by himself.

Now, I have my thoughts, which I’ll share, and then I’d love to hear what the community has to say.

Since you say he regrets and admits his actions, I’m going to rule out #1 in my mind.  He knows what he’s doing, so he’s not ignorant.

My guess (which is admitted based on very little as I only have a paragraph to work with) is that it is a mostly selfishness, perhaps not that he doesn’t care, but that he cares more about himself in that instance than in you or the marriage.  There is a lot that goes with being the low-drive husband.  For many, they feel a sense of shame because they don’t fit the “sex-crazed male” stereotype.  That can bring with it a sense of pressure to perform when they don’t want to, and can make sex sort of a scary or intimidating thing.  Where as, to masturbate, requires no pressure to perform, no intimacy, no vulnerability.

Originally, it could have been that when he felt the urge to have an orgasm, he thought of sex, thought of the fact that he was lower-drive than his wife, perhaps felt this weight of pressure to make it really good sex, because sex is infrequent, and then thought it would be easier just to masturbate.  This may not have been all conscious, of course, and if your marriage was struggling when it started, then I’d find this very believable, because marriage requires emotional intimacy in order to be emotionally vulnerable, and admitting that you are a low-drive husband requires a lot of emotional vulnerability.  So if sex brings up that vulnerability in a time that he didn’t feel emotionally secure in the marriage, it’s not surprising (though not right) that he sort of “bailed” on the marriage and decided to do it himself.  Again, just a possibility, I’m not accusing you or your marriage.  We’ve all had these times in our marriages.

So, what can you do.  Presumably you’ve already raised the emotional stability of the marriage a bit, since you are talking about something he is ashamed and regretful of.  That’s amazing.  Many spouses never get to this level of vulnerability and intimacy.  So, it may just take reinforcing that emotional intimacy.  Letting him know that you still love him, that you are there for him whenever he needs you.  To let him know there is no shame, that the import part is that he is trying to overcome it, and that you are willing to help and be his cheerleader, as it were.  But it’s going to take time for that neuropathway to shrink and die off, and the longer he’s been doing it, the longer it will take to reprogram his brain, but it can be done.

What’s wonderful is that he not only recognizes that it’s wrong, but he realizes it’s hurting you, and he wants to change.  That’s a huge step, and I hope you will both continue to take these steps so you can experience a new level of intimacy in your marriage, withholding nothing from each other.

Alright people, your turn, what do you think? 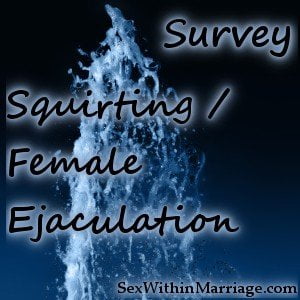