Those of you who get our weekly newsletters know that I’ve been dragging my feet while writing this for the last week.  Those in our private Facebook group know it’s been even longer – and my wife knows it’s been quite a long time coming.

What you do doesn’t define your orientation

However, it’s not what you do in your sex life that defines your orientation.  It’s who you do it with.  One simply cannot call any activity between a husband and wife a homosexual act, because it is, by definition, a heterosexual act between a male and a female.

And that seems like a fairly simple concept; yet, in our society, we still have these odd beliefs that doing something, even in your marriage bed, means you are homosexual.

Here is a comment from our survey back in 2014:

It is also my goal to have my wife perform a prostate massage on me. I know that she still has a mental block about touching me there with her finger. I believe that she still views it as “weird” that I would enjoy that activity and that it make me “gay.” I hope that other women that read this would stop to thank that just because their man can enjoy stimulation in that area does not mean that they have any homosexual tendencies. I would like my spouse to know that it can be fun and awakening to share 100% of each other. I would hate to know that something that we can enjoy together was lost by years of stubborn thoughts that have been sculpted by ignorant thought processes.

It’s so ingrained in our thoughts that he felt he had to basically call “no homo” after sharing what his wife and he do in their sex life.

And others just can’t get over the idea:

The reason I didn’t answer the question about doing things anally toy husband is because he absolutely hates the idea of being touched in that area. It’s gay for a man to want that to that.

This one I think is a bit stickier.  It’s not talked about too often, but the Bible is pretty firm on the idea that God made men and women separate and distinct genders.  This idea is under attack in our society with the concepts of transgender, pan-gender and gender fluidity.

In the Bible, God is always presented as a male husband and the church always as a female bride.  While it may not be politically correct in our society to say it anymore, but the Bible sets men as leaders and women as supporters as a living example of God leading His church.

Unfortunately, this has been abused in the past with the church setting men up to be dictators in the home rather than the relationship that’s seen between God and His people in the Bible.  I personally see a God who is willing to discuss, compromise (while still holding to His integrity), reason with, love and sacrifice for His bride.  That doesn’t mean He’s a pushover though.  God is very clear on His goals and directions and will not compromise on Love, even when we think He’s being unloving.

This concept is under attack in our churches with the egalitarian movement, and outside of our churches with the gender-fluid movement.  To me, they’re two sides of the same coin.  One attacking from within and one from without.  They’re both seeking to undermine the relationship between God and humans – confusing us about who is in charge.  I think we often tend to take this verse:

Whatever you ask of the Father in my name He will give it to you.

and we change it into:

Whatever you ask of the Father he will give it to you.

We put God into a submissive role rather than accepting we need to submit first.

And we’re not talking about a curiosity of what it might be like to be the other gender.  I think most of us wonder about that at one time or another.  I know I do – my wife’s orgasms look like they feel so much better than mine! That’s quite intriguing.  Rather, we’re talking about wanting to take on that gender as a lifestyle choice.  That’s where we get into trouble in my books.

I’m not exactly sure what God was thinking, but He placed a ton of nerve endings in the region of our anus.  There are many between the scrotum and the anus, more around the edge of it, and the prostate can be stimulated to engage even more pleasurable sensations, and even orgasm.  And I’m not saying that “if it feels good, God must have meant for us to do it”.  It’s not just men, women have a similar distribution of nerve endings and sensitivities.  No prostate of course, but the clitoris nerves wrap internally around the anus, which again, seems like an odd design choice.  But that’s neither here nor there today because we’re talking about men.

In short, there are a lot of nerves in that area that can feel pleasure.  In fact, even if you’ve lost your penis entirely, or just the use of it, some people can still have an orgasm through prostate stimulation.  This makes it a potential method of sexual pleasure for those who have been in accidents, suffered some form of paralysis, or just have ED they can’t seem to correct.

Even without those ailments though, some men say that the orgasms they get from prostate stimulation are far more intense than through penile stimulation.  So, it’s no surprise that some might be interested in that sort of pleasure.

Being on the receiving end

This one can get a bit confusing for some.  I think there is a difference between wanting to swap gender roles and wanting to be the one receiving pleasure.  The one has to do with identity, and the other has to do with physical and emotional sensations.

I think most men (I know high-drive wives, not all men) find the idea of their wife taking a more active role in sex to be appealing.

For some men, the idea of their wife taking such an active role in sex to the point that they are doing the penetrating is extremely arousing.  Think about it.  You don’t have to worry about:

You get to be the one who just receives pleasure.  I can understand how that could be attractive.

I know, some men can get this from their wife being on top and “doing the work” during regular intercourse, but not all men can orgasm from that.  Not all men can keep an erection up like that either.  For that matter, not all women can manage it for long, if at all, either.  Besides, it’s not quite the same.

Lastly, we tend to crave variety in sex.  Couples that just tend to have missionary position sex with the same foreplay on the same nights of the week at the same time, year in and year out, tend to get bored.  Passion dies, and it tends to become something that just releases sexual frustration rather than being a bonding experience.

What’s in it for the wife?

In short, many do it either because their husband asks and they’re willing to bless them in that way, or because they actually enjoy seeing their husband receive pleasure.  I think that’s awesome.  As I suspected, some just wanted to try something new, though I honestly don’t think I could get “bored with vaginal”.

Are there any dangers?

Some say the vagina was made to stretch but the anus wasn’t.  Everyone knows that’s not really true right?  I mean, you can tell that just from going to the bathroom.  In a sexual situation this is even easily told.  When going to the bathroom, frankly we tend to be in a hurry.  With sex, the key word is patience.  The second key word is lube.  You’ll find it stretches quite a bit and snaps back easily.  Take your time, use lots of lube, and if it hurts, stop.

While we don’t like to think about it, homosexual men have been engaging in activity similar to this for a long time.  If the warnings were true, well, the price of adult diapers in certain cities would skyrocket and there’d be a run on proctologists.  It doesn’t happen.  There’s just a lot of anti-gay propaganda that this is getting spillover from.

Don’t use numbing lube.  Same goes for alcohol or drugs.  Stop if it hurts.  Take it slow.  Especially because toys tend to be harder and more rigid than penises.  Oh, and don’t buy a toy with phthalates (more info here), and be sensible about the size.

Basically, it’s the same rules you use for “regular” sex.  If you’re too rough, don’t have sufficient lubricant and don’t pay attention to your body or your spouse’s, someone is going to get hurt.

How do you express a desire to try this with your wife?

Well, we just did a post on sharing sexual fantasies that you can check out.  Now, that had more to do with the person listening than it did the person sharing.  But, you could share that post with your spouse and then share the fantasy once they’ve been primed on how to respond appropriately.

I don’t think so.  If both spouses are up for it and you take the necessary precautions, and with the few caveats mentioned above, this seems to be something both can enjoy as a way to enhance their marriage bed.  Of course, if you’re not interested or feel morally opposed to it, then just opt out.

I’m hoping we can have a civil discussion about this below, but based on past experience, I’m worried it won’t be so.  I’d love to be proven wrong though 🙂 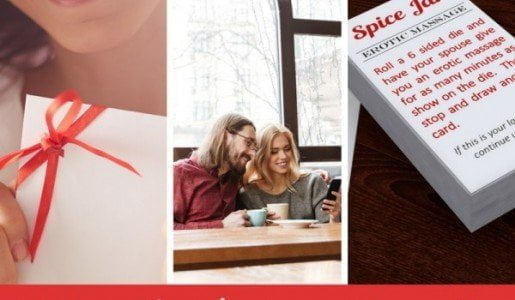 Drop “should" from your vocabulary this year
>