Household Hierarchy: What does our physiology say about who should lead?

Household Hierarchy: What does our physiology say about who should lead? 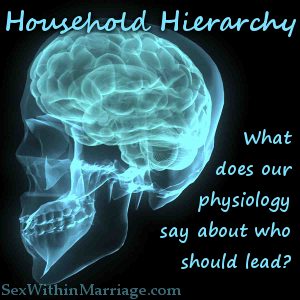 We’re taught from a young age these days that you can do whatever you want, be whomever you want. Our society has done it’s best to tell us that we are all equal, that gender is a frame of mind and a choice, that our physiology has nothing to do with what role we are to play in life.

We hear stories of public washrooms becoming unisex and of transgendered people suing athletic competitions for daring to categorize athletes based on their chromosomes.

But science has been telling us a different story. That our genders are fundamentally different.

There is a section of the brain called the corpus callosum, it is the bridge between the two hemispheres, the right and left side, of the brain. And women’s brains tend to have a much thicker corpus callosum than men. This difference is already measurable at week 26 of pregnancy by an ultrasound machine. Males, in utero, get a burst of testosterone earlier in the pregnancy that bathes the brain, essentially burning away part of this bridge.

Now, some will hear this and say that men are brain damaged, but I would say specialized, because this is the beginning of a larger process with an intended purpose. This difference in the bridge between the halves of the brain accounts for some interesting differences in our mental capacities and strengths. By the time we reach adulthood, men on average have 6.5 times the amount of grey matter (which is considered thinking tissue) than women.

This difference leads to interesting strengths and weaknesses in men.

Because men’s brains are less connected, but have more sheer processing power, being on average 10% larger than women’s brains, they tend to be better at achieving a small set of goals, or a singular goal. Men are specialized to see a problem, find a solution and execute that solution until the problem is gone, without distraction. We are created to cast visions, to find a mission and to target goals along to way to achieve that vision. I believe this is why God set men to be the household leaders. We are specifically created for the task set before us. This wasn’t random chance or a toss of the coin.

On the other hand, Women’s brains are highly specialized for support. On average we have 9.5 times the amount of white matter (connective tissue) than the male brain. By having more connective tissue, and a larger corpus callosum, connecting the halves of our brains together, what we lose in straight thinking power, we make up in the ability to think about many different things all at once, which makes us invaluable when it comes to filling in the details of plans, or how to get things going for a mission or project that has been set.

One interesting fact that Jay shared with me during one of the lectures in his recent studies is that when men visit for the first time with a Life Coach, they can generally come up with a vision and mission fairly quickly, if they didn’t already have one. But the lecturers (who were all women by the way) said that women have a really hard time thinking far enough ahead to vision and to plan for a far away future. They immediately start thinking about all the details and filling in the gaps in the present or very near future, and have a hard time thinking in a straight line to a distant potential future, instead finding obstacles that will get in there way before they even know where they are going.

Last year we went to Myrtle beach, and I planned the trip, what to bring how to pack what the kids would do for the drive, and how the seating in the van would be. There was a lot to think about! And I know Jay didn’t even realize the things that I put together until we left and saw what I did. I don’t say this to brag, just to show the difference in how we think. He focused mostly on one big task: making sure we had the money we need to take the trip. He also planned the route, settings our driving goals by finding the hotels we stayed in on our way there and back. We didn’t sit down and say “I’m going to do this and you do that”, it’s just how we work together.

I think it is fascinating when the Bible seems to line up with science, and with the experiences of experts in the field of leadership and planning, and our own personal lives. To us, this all points to a hierarchy that was set up at creation and has never been changed. Men are designed, appointed and responsible for leading the household, and women are designed, appointed and responsible for supporting their husband in his leadership.

Were you aware of these physiological differences in our brains?  Do you find this matches your marriage in terms of strengths and weaknesses.  Does this information help you understand how your brain works and why sometimes you get frustrated with your spouse when you just don’t understand what they were thinking? 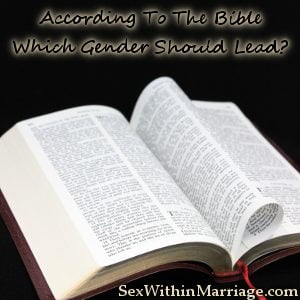 Household Leadership: According to the Bible, which gender should lead?
>

12 thoughts on “Household Hierarchy: What does our physiology say about who should lead?”