Drop “should” from your vocabulary this year

Drop “should” from your vocabulary this year

“Should” is a dangerous word that gets used far too often.  Now, I’m sure there are some appropriate times where it can be used, but often we don’t use it appropriately.  Often we use “should” where it’s actually harmful to what our goals are.  And,

“Should” is a dangerous word that gets used far too often.  Now, I’m sure there are some appropriate times where it can be used, but often we don’t use it appropriately.  Often we use “should” where it’s actually harmful to what our goals are.  And, since this is the goal-setting season, I thought I’d share a few times you might be using “should”, and it might not be in your best interest.

Dropping what others “should” do, think or say

“Should” often gets you into trouble in relationships because it tends to pop into your head when you think you are better than the other person.  If you say “You should”, what you’re really saying is “you’re not smart enough to figure this out on your own” or “I know better than you what the best thing to do was”.  When you say “they should” about your spouse, then you’re really saying “If they were better, they would”, and you’re implying you would in their shoes.

“Should” implies an assumption that they aren’t doing what is optimal either because they’re stupid, lazy, selfish or malicious.  Whether it’s true or not, holding that thought, or saying it out loud isn’t helpful.  You just end up reinforcing their behaviour.  “Should” becomes an inverse spouse-fulfilling prophecy.  In other words, they will likely gravitate towards exactly what you think they “shouldn’t” do.  That’s just human nature.  You’re assuming they don’t know, don’t want, or aren’t able to do something, and they’ll likely believe your assertion.  You end up encouraging the exact opposite of what you want to happen.

Instead, assume they know what’s right and compliment them on the behaviors you like to see.  Instead of saying:

You should go to the gym before supper.

What do you want to eat when you get home from the gym?

You should shower before coming to bed.

I’m looking forward to kissing your showered body from head to toe and everything in between.

Now, some may think that is manipulation, and it might be, but you are working off the assumption that they’re going to do what they said they would.  You are assuming they have personal integrity rather than assuming they don’t.  While it might be slightly manipulative, I’d argue that assuming they don’t have personal integrity and then shoving that in their face is abusive. So, if the choice is abuse or manipulating them into doing what they said they wanted to do, I’ll take the latter.

However, even if you don’t say it out loud, it’s still damaging.  To have these thoughts in your head that you know better than them, that you believe they are either lazy, stupid, selfish or malicious means you believe you are better than them.  This is the basis for contempt, and a relationship with contempt in it will struggle to survive, let alone grow.  Even if you don’t say the “should”, holding the idea in your head will change your tone of voice, your facial expressions, body language, and all the other myriad ways we communicate to our spouses.

Drop what you yourself “should” do

The other place in your life where dropping “should” will help is when you are trying to motivate yourself.  Saying “I should go to the gym” immediately makes you not want to to go.  We don’t want to do what we “should” do.  Again, it’s in our nature.  We prefer to rebel, to do what we want to do instead of what we should do.

This way you enforce the idea in your brain that you want to go.  That working out is something you desire, not a chore to be completed.

Can you tell that getting fit is one of my goals?  Maybe it’s not for you.

I know some of my readers will probably have goals to have more sex for the sake of their spouse.  I know some think to themselves “we should have sex, or else they’ll be grumpy”.  What if you turned it around to be “I want to have sex because I like seeing my spouse happy”?

Now, of course, there’s a large mindset shift that has to go with it.  Mere words aren’t enough.  But the words can help get you started.  What we say gets processed and solidifies pathways in our brains.  Simply saying something we want to believe or hold true makes it easier for our brain to hold that idea as fact.  Say it often enough over the course of time, and it can help change your brain’s attitude towards the behaviour you want to accomplish.  Over the course of a year, sex could change from a chore to a delight.

Having trouble doing that?  It’s okay, many people do.  Try splitting it up into baby steps.  Find one thing about sex that you like.  Just one.  If there isn’t one, then create one.  Ask for a massage first, or different foreplay.  If sex isn’t appealing in any way, find a way to make it appealing.  Then focus on that one thing and look forward to it.  After a while, see if other parts of sex have become more appealing, and then focus on them as well.

My point is, stop doing what you “should” be doing.  Instead, focus on what you want long-term, and then recognize that you want to do the behaviour that leads to that goal because it’s part of attaining it.  Or, focus on one aspect that you enjoy and single that out to anticipate.

Drop what “we should” be doing

A lot of couples get caught up in trying to keep up with everyone else.  This could be “keeping up with the Jones’”, or it might just be “We’ve been married x number of years, we should have a better sex life by now!”

There is no race to finish, there’s no pace to keep up with.  Everyone goes at their own speed based on what they brought into the marriage which is a mix of their own personal choices, what they were taught, and probably some genetics.  Behaviours early on in marriage also play a large role in this, and most people have no idea what they are doing in those first years.

That’s just sex.  Then you have communication, finances, faith, parenting, housework, and so much more.

There is no “should”, because no one has ever done what you are doing in your marriage.  “Should” just sets up a false expectation that has the potential to set you back even further due to depression, frustration or both.

You are where you are.  Pick a goal, and set out for it.  Just leave the “shoulds” behind.

Can you go a year without saying “should” to your spouse or yourself? 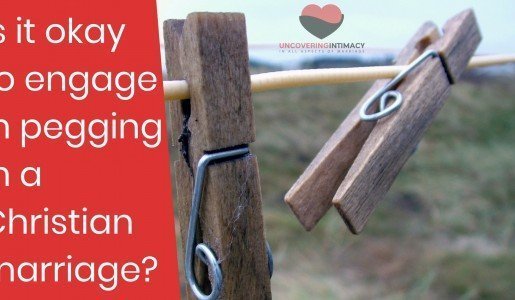 4 thoughts on “Drop “should” from your vocabulary this year”