How can I stop gushing?

How can I stop gushing?

Here’s a question I received about a week ago through our anonymous Have A Question page: I’ve been married almost two years and have never experienced an orgasm. However, recently, with a lot of work especially on my husband’s part and a long time of 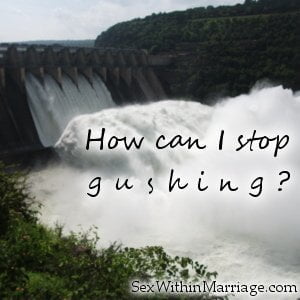 Here’s a question I received about a week ago through our anonymous Have A Question page:

I’ve been married almost two years and have never experienced an orgasm. However, recently, with a lot of work especially on my husband’s part and a long time of stimulation, we’ve come close (by manual stimulation of the clitoris) and suddenly I had a rush of fluids flowing out of me. I thought I was peeing the first time it happened. It turned us both off, but mostly me. Then it happened the next time we tried it happened even more because I just let it happen rather than stopping abruptly when I started to squirt. There was probably half a liter of fluids and we had to change the sheets! Neither of us like this but still want me to experience orgasm. Do you have any suggestions?

In our survey on female ejaculation, (results here) we found that 7% of wives who experience this would actually prefer not to release so much fluid, that it makes sense less enjoyable.  So, what if this happens to you and you don’t want it to?  Can you stop?

Are you female ejaculating, gushing or peeing?

If you are female ejaculating

So, female ejaculate is fluid produced from the Skene’s gland.

In female human anatomy, Skene’s glands or the Skene glands(/skiːn/; US dict: skēn; also known as the lesser vestibular glands, periurethral glands, paraurethral glands, or female prostate) are glands located on the anterior wall of the vagina, around the lower end of the urethra. – Wikipedia

The fluid is basically the same as semen, but without the sperm.  It contains the came proteins and fluids, just without the genetic information.  Like with a man, it comes out of the urethra too.  The fluid that comes out is generally milky or whitish in colouring and generally isn’t a lot of fluid, so I don’t think that’s what’s going on above.  Still, this might be helpful for someone else.  Generally a woman who is ejaculating is doing so because the Skene’s gland has been getting a lot of stimulation, and so it engorges, fills with fluid and then expels it (often during orgasm, but not necessarily).

If you are gushing

That said, because it’s running through the bladder, it is going to contain small amounts of urine, not enough that it should bother you, but enough to confuse researchers…

In short, it’s liquid, but it’s not urine.  Some say it tastes sweet.

Unfortunately, not a lot is known about this.  It seems a fear of peeing stops a lot of people from experiencing this, which suggests it’s possible to control it, but there have been no studies I have seen on that.  However, if I had to guess, I’d say Kegel exercises and increasing your pelvic floor muscles might help.  Other than that, it seems to be sort of a damn that, when broken, is hard to gain control of again.  People that say once they experience this, suddenly it starts happening every time.  But, most of them are happy about it, so I don’t know how many are actually invested in learning how to stop. What you can also try is limit pressure on the bladder during sex.  Since the questioner is doing manual stimulation (or with a toy) only on the clitoris, that may not help, but perhaps avoid pushing down on her stomach just in case the husband is resting his head, arm or leg there or something.

Another thing you can try is attempting it kneeling instead of lying down.  It’s easier to control your pelvic floor muscles while kneeling, and so that may prevent it.

If you are peeing

This isn’t uncommon.  It could be stress incontience, which is due to excess pressure being put on the bladder.  In fact, 29% of women under 60 say that have had this happen during sex according to WebMD.  Now, those responses may be confused between peeing and gushing, we don’t know.  Still, my point is, it’s not uncommon.

It could also simply be that you have poor control over your PC muscles and during sex you are trying to relax and … well, you relax too much.  This may resolve in time as you learn your body better, especially how it reacts to sex, and your body may learn which muscles to relax and which you need to keep in control of.

The problem is that this is going to make orgasm harder.  Now you have this fear of fluid coming out of you when you try, and that anxiety is going to increase your cortisol levels (the stress hormone), which negates dopamine (the “risk/reward” hormone”), which you need to orgasm.

So, things you can do:

Relax.  Be calm.  Almost everyone deals with some sort of sexual struggle.  They just don’t like to talk about it.  While you’re sorting things out, get a bunch of big towels and a waterproof mattress cover to have sex on so you have a dry place to sleep at night.

You’ll get through this.  You didn’t aspect specifically about the orgasm difficulties, but you may want to check out:

<
Don't tease unless you're willing to follow through soon

Did I marry the wrong person?
>

4 thoughts on “How can I stop gushing?”