I heard a new term this week and I’m really excited about it, because it’s a concept I’ve known about for a long time, but I’ve not seen many people write about it.  I also didn’t know what to call it.  I like having labels, 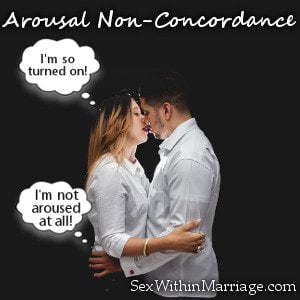 I heard a new term this week and I’m really excited about it, because it’s a concept I’ve known about for a long time, but I’ve not seen many people write about it.  I also didn’t know what to call it.  I like having labels, because it makes it easier to short cut conversations and make sure everyone is talking about the same thing.  So, I’m pretty excited that this concept is being talked about.

Your spouse can mentally arouse you, but you show no physical signs

For women, this means you can mentally ready for sex, want it even, but physically, you’re not lubricated (wet), and blood flow hasn’t increased in the genitals (making physical sensations better).  Unfortunately, this is the standard by which our society has deemed that arousal has happened or not.  We automatically assume that wet = aroused, both physically and mentally, and when that doesn’t happen, we assume that something is wrong.  Either they’re not interested in sex right now, or worse, they’re not interested in us.

In fact, this has spawned a whole movement in part of the manosphere of rejecting the use of lube because lube means the woman isn’t really interested and they want the most exciting passionate sex possible.  So, if she’s not wet…well, I’ll go find someone who is.

Now, hopefully that sort of mentality doesn’t exist in Christian marriages, but I am quite certain that some husbands and wives are confused about a lack of natural lubrication at times by the wife.  I wonder how many are thinking something is wrong with themselves, with the situation, or with the marriage, when in fact, there’s nothing wrong at all.  It’s perfectly normal.

The same thing can happen for men.  Again, our society has decided that erection = arousal, with in a lot of cases, that isn’t true.  A husband can be extremely interested in sex, but lack an erection.  Sometimes this has to do with erectile dysfunction, but other times it’s simple arousal non-concordance.  His brain is aroused, but his body hasn’t caught up, or kicked in.  Again, because we’ve been taught to believe that erection = arousal, this can be confusing for a lot of spouses.  If a wife is giving her husband oral or manual sex, for example, and he loses his erection, the assumption is that she’s not doing a good job, or at least that he’s not enjoying it.  But, I know for a fact that this happens to a lot of men and they are absolutely loving the attention…there’s just this arousal non-concordance.  It doesn’t mean he’s not enjoying it, and it doesn’t mean you aren’t doing a good job.  He may be extremely aroused mentally, but physically just need something different.

You can be unaroused mentally, but show physical signs of arousal

Of course, the opposite is true as well.  Many women have experienced lying in bed with their husband, going through foreplay, and being very lubricated, but mentally not being there at all.  They may be physically ready for sex, but their mind is on the grocery list, or on the task list for tomorrow.

And just about every guy remembers being a teen and getting random erections without any mental arousal.  It doesn’t just happen when you are young either.  How many of us have gotten an erection occasionally when a child climbs into your lap?  No one wants to talk about it, because everyone is terrified they’ll be called a pedophile, and sadly, I’ve even seen psychologists claim that it shows something disturbing about the individual, but the fact is that this is another facet of arousal non-concordance.  There was a physical stimulus and the physical arousal system kicked in.  It has nothing to do with their mental arousal.

There is an overlap between physical and mental arousal

Now, it’s not that they’re completely disconnected of course.  As far as I can tell from resources, in men, there’s about a 50% overlap between mental and physical arousal.  In women, it’s more like 10%.  Women’s arousal patterns are far more complex.  Plus, it’s a lot harder for a woman to tell if she’s physically aroused.  Men have this obvious erection that strains against our clothing, or bumps into things, or, well, just sticks out there.  But for women, their genitals are not as obvious.   They may have no idea that they are wet.  They could have increased blood flow to their genitals and not know it. I think this might be part of the reason.  After all, if a man get’s an erection, that tends to make him think about sex, and so they sync up a lot more often.  For women, there isn’t that obvious stimulus to trigger a mental arousal response.

How do we deal with arousal non-concordance?

So, what does this mean for us?  Well there are a two major things:

Lastly, if arousal non-concordance symptoms worry you, don’t worry.  It’s perfectly normal.  You just need to learn some tricks to get them to sync up when you need.  Those will likely differ from individual to individual, but finding them sounds like a fun exercise.

So, do you experience arousal non-concordance?  Let us know in the comments below.