Yesterday I wrote about arousal non-concordance and how sometimes our body’s arousal doesn’t match up with our mind’s arousal.  How it can be that your mind might want sex, but your body isn’t ready.  Or the opposite can happen.  Unfortunately, this confuses a lot of women 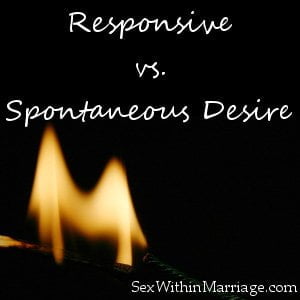 Yesterday I wrote about arousal non-concordance and how sometimes our body’s arousal doesn’t match up with our mind’s arousal.  How it can be that your mind might want sex, but your body isn’t ready.  Or the opposite can happen.  Unfortunately, this confuses a lot of women about their own bodies (and husbands about their wives’).  I mean, how do you know when you’re aroused if you can’t trust your body to tell you.  Or if you can’t trust your mind to accurately report on your body.  Unfortunately society has taught us that in order for a woman to want sex, she should be both mentally and physically aroused.  But, as I shared yesterday, there is only about a 10% overlap between mental and physical arousal.  So, many wives think they’re never aroused, and so they think they don’t want sex, and so they reject their husbands.

The problem is, a lot of them don’t know about another model out there: that of responsive vs spontaneous desire.  I’ve written about this in passing numerous times (sometimes I’ve called it reactive and proactive desire), but I haven’t devoted an entire post to it yet, so here we go.

The study of sexuality has had a difficult history.  Back in the dark ages, female sexuality was limited to reproduction.  For women to be sexual was considered shameful, only redeemed by their ability to bear children.  It’s in the era that they named women’s external genitals the ‘pudenda’, which is Latin for ‘shame’.  The male external genitals, by contrast are was named either after a bull, or a whale (the etymology is unclear).  The underlying principle was this: men’s sexuality is powerful and women’s sexuality is shameful.

Over the years, we’ve slowly become more willing to discuss the differences between male and female sexuality, but this same foundation still largely exists.  Men’s sexuality is considered normative, and women’s sexuality is considered … less than ideal.  For example, most of us have heard the analogy of women being like crock pots (slow cookers) and men being like microwave ovens.  Of course, there’s some truth to it, or it wouldn’t be so popular.  Women tend to take a long time to warm up, but they stay aroused for a long time.  Men, on the other hand, can heat up quickly, but when they stop … they cool down quickly too.  But, this analogy is still based on the same paradigm, that male and female sexuality are inherently the same.  It doesn’t explain the whole story.  In fact, it ignores a huge part of it.

Spontaneous desire looks like this:  You’re walking down the road and suddenly think “Wow, I would love to have sex right now.”  Or, you’re just sitting in a chair and suddenly you get an erection.  This of course is recognized by your brain and you think “Wow, I’d love to put this erection to use right now.”  I’ve seen things that say men think about sex every 7 seconds (which seems a bit much) to a few times a day (which seems too little), and often if we’re thinking about sex … we want sex.

Ask a group of women how often they just suddenly want sex out of the blue, and you’re more likely to get answers that range from once a week to once a decade.  Of course, there are some who have spontaneous desire pop up more often, and there’s nothing wrong with that.  It’s just not what the average woman experiences.

Unfortunately, our society has been trying to tell us that spontaneous desire is not only the norm for both men and women, but that it’s the proper pattern for arousal.  In our movies somehow the lead couple manage to spontaneously want sex at the same time.  They just suddenly are overcome with a desire to have sex.  What are the chances of that in real life?  Slim to none I’d say.  It completely ignores responsive desire as a mode.

Responsive desire work the opposite and it looks like this.  You aren’t aroused at all, but then your husband starts rubbing your back, or stroking your hair, or kissing you and you start to think “Hmm, that feels good…I might be up for some sex”.  Or maybe it’s Friday night and you “always” have sex Friday night.  You know, it’s not scheduled … but it’s expected. So you allow your husband to undress you and start kissing you and you’re thinking “Well, I’ll do this for him”.  You’re not really aroused and so, with the help of lube, sex begins and then you start feeling something.  Then you start to think “Oh, wow, that’s starting to feel good.  Maybe I do want this….oh yeah, I definitely want this.”  That’s responsive desire.

Luckily, we figured this out in our marriage a few years ago, and so my wife will sometimes say “let’s just get started, and I’ll catch up”, because she knows that her arousal patterns is almost always responsive.  I think she’s only spontaneously wanted sex three times in our marriage, and even those are suspect (TTC).

Now, if you’re a wife and you don’t know anything about responsive desire, and you’ve been listening to our culture all your life (how can you not), then you probably believe that sex should only happen when you’re already aroused.  I can’t tell you how many men have written me with the phrase “when the planets align” when describing their wife’s willingness to have sex.  Because in order for their wife to believe she wants to have sex these things need to happen:

Frankly, the planets have a better chance of aligning.  More often, these types of wives just give in and give duty sex because they feel they are obligated to.  And guess what happens?  Turns out they enjoy it a lot of the time!  Most of them have orgasms, and think, or even say, in the  moment “Why don’t we do this more often?”  But, then the next time her husband wants sex … well, they fall back on their culturally influenced system of “am I in the mood for sex?”  This confuses a lot of men, because they see their wife enjoying sex, having orgasms, maybe even saying they want to do it more often … but it doesn’t ever change.  They do everything that society tells them they should do to have more sex.  They help with dishes, they make sure their wife enjoys herself during sex, they start with a massage, they go through every checklist.  But the problem is that they’re working against a flawed model.  The problem isn’t that they aren’t doing enough in most cases.  The problem is that their wife is thinking she needs to be aroused before any sexual contact begins.

When the reality is that the data shows that only about 15% of women find they have exclusively have spontaneous desire whereas 75% of men do. On the other side of the spectrum, about 30% of women and 5% of men will never experience spontaneous desire (I want to run my own survey on this to confirm).  This can cause some serious confusion and problems if you are expecting all desire to be spontaneous and the bulk of women experience responsive desire more often than spontaneous.

How does this help us?

So, how do you solve this?  Well, we need to realize that the problem isn’t the difference in modalities.  The problem is the expectation of everyone having spontaneous desire.  By knowing about the two different arousal types (if you’ve read this, then you’ve done that) you now become more aware that people are different and those differences can be navigated.  They don’t need to be changed.  Second, share it with your spouse, so they can understand as well.  Lastly, we need to throw out this idea that we should only have sex if we’re aroused.  In fact, we should change the word “desire” to “willingness” in a lot of our communications about sex, because that more accurately depicts the attitude and disposition needed.  More on that tomorrow.

So, let me know in the comments.  Is this news to you?  Is this something you knew about?  Does it change how you approach sex?  Will it spark a discussion in your marriage?

21 thoughts on “Responsive vs spontaneous desire”