Yesterday I promised I’d write a post on desire vs. willingness, because, again, this is a topic I’ve mentioned many times, but never devoted a post to.  Our society teaches us that we shouldn’t have sex unless we desire it.  In movies, both of the

esterday I promised I’d write a post on desire vs. willingness, because, again, this is a topic I’ve mentioned many times, but never devoted a post to.  Our society teaches us that we shouldn’t have sex unless we desire it.  In movies, both of the romantically involved characters are suddenly burning with passion before they have sex.  It seems spontaneous, while miraculously being perfectly timed. In real life, this rarely happens.  More often than not, one spouse has a spontaneous desire and the other is responsive.  If that wasn’t the dynamic we’d all just sit around asking “Do you want now?  No?  Alright, I’ll ask the next time I do.”  Actually … I think that actually happens with a lot of couples.  And it’s insane.

We have this crazy notion that if we’re not suddenly feeling desire, then sex is an imposition.  As if this wonderful gift from God somehow sours into something disgusting if we happen to not be feeling spontaneous desire at the exact same moment our spouse is.  Healthy couples have realized that there’s nothing wrong with spontaneous desire.  That’s how they can have amazing sex, even if it’s scheduled and both of them have to rely on responsive desire.  How is this possible?  Because they’ve accepted that sometimes a willingness to have sex can be just as powerful as a desire to have sex.

Desire to have sex

Desire is this strange thing.  It’s not really measurable.  We can’t really explain what it is except that we “want” something.  Too often we get it confused with physical arousal, which, while related, is very different.  For example, Viagra (et al) can boost physical arousal in a man, it can give him an erection, but it can’t force him to want sex.  It can’t affect desire.  Now, most men will respond with desire if they have an erection, and so it works most of the time.  In women, it’s a bit different.  Their arousal non-concordance is much stronger.  I have no doubt that there is a pill out there that can get a woman physically aroused, but there is little chance that that physical arousal will actually lead to mental arousal / desire.  It’s harder to force desire in women because the signs of physical arousal in a woman aren’t as obvious, even to them.

What we do know is that for many people spontaneous desire just doesn’t happen very often.  About 30% of women say it almost never happens, and spontaneous desire frequency tends to drop with age as well.  This is why a lot of men are surprised (and not in a good way) when their wives start becoming gatekeepers later on in marriage.  For some of them, their spontaneous desire is waning, and they refuse to utilize the other mode: responsive desire.  A lot of men (and women) see this right after they get married.  I suspect that this is because dopamine is triggered in high doses during dating/engagement/honeymoon because of the excitement and dopamine directly influences arousal (both physical and mental).  I further suspect that this can trigger spontaneous desire more often, or at least significantly boost the Sexual Excitation System (more on that in another post) so that it counters the Sexual Inhibition System (again, another post) and makes it easier to accept responsive desire.  But, I’ve not seen anyone doing studies on that yet.  So, that’s just my hypothesis.

When the excitement wears off and it become normal life, well, then we fall into what is actually normative for the person, which often feels like a bait and switch, though I doubt it’s intentional in most cases.

This is when we need to fall back on responsive desire.  However, that requires one be willing to be aroused.

Willingness to have sex

Instead, those spouses who experience responsive desire more often than spontaneous desire need to have an attitude of being willing to have sex.  I think this is exactly what the Bible calls for.  We’re rarely going to find ourselves spontaneously aroused at the same time, and so one, or preferably both, need to be willing to allow themselves to aroused in response.

I’ve gotten so many comments over the years from wives who have picked this concept up from a post, or from our course for wives, and they are amazed at the outcome of that simple mindset shift.  It redefines their marriage! Yes, their entire marriage.  Because the willingness to have sex instead of relying on spontaneous desire, that mindset change overflows into other areas of marriage as well.  Maybe I don’t feel like going for a hike now…but I might enjoy it when I’m out.  Maybe I don’t feel like doing the dishes now … but I’ll be happy with the outcome.  Plus, there are all the other benefits of having more frequent sex in marriage too.

The problem is when a spouse (be they husband or wife) refuse to be aroused.  When they think that spontaneous arousal is the only valid form.  Because for many of them spontaneous arousal just didn’t happen.  Then they decide unilaterally that sex isn’t important for marriage, because it’s not important for them.  This is not only incredibly selfish, it’s also childish.

Children under a certain age don’t understand what is termed “Theory of mind”.  That is they think everyone has the same perspective they do.  This slowly starts to grow as they progress, but it’s extremely evident in a toddler.  If they are hungry, everyone should be hungry.  They will try to feed you even.  If they are upset, they’re confused and frightened if you aren’t.

As we grow up, we start to understand that we don’t share a brain, that we have different perspectives on life and experiences.  But, some individuals never fully mature in that way.  They think that because sex isn’t important to them, then it’s not important to their spouse.

Or worse, they’re condescending in their belief that they are normative for not desiring sex, and so they accuse their husband or wife of being broken, of being addicted to sex, of being full of lust.  Usually when this occurs, the relationship has died.  Marriages cannot survive condescension.  Oh, they may still be legally married, own the house together, share on bills and such, but the fundamental relationship is gone.  How can you be intimate with someone who thinks you are sick for desiring to be with them?

Sorry, went off on a bit of a rant there.  Where was I?  Oh yes, willingness to have sex.

Test drive a willingness to have sex

My point is, the vast majority of “low drive” spouses will find that if they allow themselves to be aroused, they will actually enjoy themselves.  They’ll see not only personal benefits in their health, mood, etc., but also huge benefits to their marriage.  Don’t believe me?  Try it.  Give it a month of not saying “No”.  Of saying “Yes” whenever your spouse wants sex (within reason).  And don’t do it begrudgingly.  You have to actually be willing.  It’s okay to ask for help getting aroused in that time.  Ask for a massage.  Massages are great for responsive desire.  They set the context for sex (naked, touching, bedroom, locked door), and give your body time to get aroused.

Low drive spouses: I dare you, the next time your spouse initiates sex and you aren’t “in the mood” (as if you should randomly be in the mood), then respond with “Are you willing to give me a massage first to help me get in the mood?”

High drive spouses: Try offering a massage instead of initiating sex.  Like I said, it sets the context which should work with the Sexual Excitation System to get your spouse closer to being able to say “yes”. 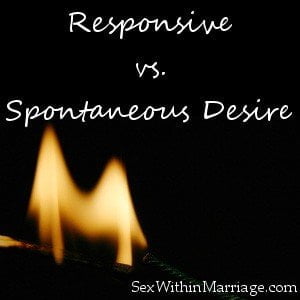 11 thoughts on “Desire vs. willingness”