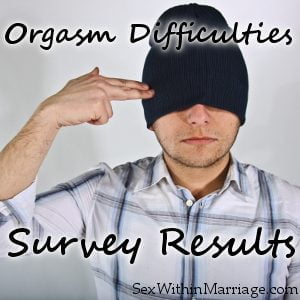 Sometimes sex just doesn’t quite go the way you were hoping it would.  Orgasm difficulties can include premature ejaculation, delayed ejaculation, erectile dysfunction, and anorgasmia.  I was curious about how often these challenges occur.  We see numbers about erectile dysfunction (ED) all over TV while companies are promotion drugs like Viagra, Cialis, and the like, but the rest don’t really get talked about much.  Also, I wanted to know how people deal with these challenges.  Do they all take drugs for ED as the commercials would have us do?  Do they find other creative ways to deal with difficulties, or do they sidestep the issue?

So, I put our a survey last week asking people about their experiences.  388 of our community responded, which I am extremely grateful for.

We had 388 respondents in total, 174 women, 212 men and 2 who abstained from sharing their gender (I should make that one required).

The youngest participant was 18 year old, and the eldest 76 years old with marriages ranging from brand new (one just married this November) to a 45 year marriage (this happens to be our eldest respondent as well).  76 years old, 45 years married and still filling out sex surveys…God willing I live to do the same.

Have you ever had an orgasm?

98% of respondents have had an orgasm.  I’m afraid not having one is fairly rare amongst the general population.  It’s even more rare among men.  I’ll be honest, I was astounded to find one husband (0.5%) in our survey who admitted he’d never had an orgasm.  I’d never heard of such a thing.  I spoke with Bonny @ Bonny’s Oysterbed7 (who is my go-to person for anorgasmia and libido issue questions I can’t solve) and she is looking into possible pituitary gland issues that might cause this (for men and women), but I haven’t heard back yet.  So, I don’t know what to say to that, other than it must be incredibly frustrating…or maybe it’s not, if it’s a pituitary gland issue, there may not be a need felt even.  Basically, I don’t know anything.

Among wives it’s a bit more common.  3.5% of wives in our survey said they’ve never had an orgasm.

What about during sex?

What about during sex with additional stimulation?

Fingers, toys, whatever.  29% of wives still cannot orgasm in this situation.  But, that’s a 10% improvement.  So, if you have never had an orgasm during sex and have never tried a toy…maybe check out our post on sex toys.

Now, here’s the confusing one: 23.2% of men say they cannot orgasm with additional stimulation.  I wonder if they mean that while they are trying to produce an orgasm in their spouse, they are too distracted to get their own, or perhaps the toy gets in the way, or … well, I don’t know.

Have you ever had an orgasm with your spouse present?

I filtered this to exclude those who said they’ve never had an orgasm.  It turns out 2.4% of wives do have orgasms (or have had one) … but never with their spouse present.  Ouch.

1.4% of husbands have also had an orgasm, but never with their wife present.   Again, ouch.

I’ve filtered these to only include those who have had an orgasm during sex, either with or without additional stimulation.

But, the distribution is quite different between the two:

Almost half of husbands are in the 100% column, but the largest group of wives is in the 80% range.

That means 70% of couples have experienced this challenge in their marriage.  However, I should point out that some of the people who said they experience it every time, also say it takes them 20-30 minutes to orgasm on average.

Now, many guys think “wow, I wish I could have THAT problem”, but it’s not quite as glamorous as it sounds.  Delayed ejaculation can be a very challenging thing.  Imagine having sex so long your muscles give up before you can orgasm.  It’s like running a marathon, but never getting to cross the finish line.

Again, this is highly subjective.

More than half (57%) of the respondents said they’ve experienced this in their marriage.  But, some of these respondents say the husband orgasms in under a minute on average.

So, if we go with a generally accepted 30 minutes or longer to orgasm we arrive at 2% of the husbands represented in our survey experiencing delayed ejaculation on a regular basis.

Erectile dysfunction of course gets the most press.

55% of couples said they’ve dealt with erectile dysfunction.  I think this is less subjective.  I mean, you can either get an erection, or not.  There’s not much of a grey area there.

I feel like I should have explained this one better.  Anorgasmia is an inability to orgasm in general.  If you just can’t orgasm one night…that’s not anorgasmia.  If you’ve never had an orgasm, but have tried, then you have anorgasmia.  If you used to have orgasms, but now never do…I think that’s anorgasmia as well.

Our respondents said that 41% of them have experienced anorgasmia in their marriage.  I don’t think that number is worth anything, but like I said, my fault for not explaining it better.

So, instead we’ll go with the answers to the question “How regularly do you orgasm during sex”.  If you look at those who said 0% of the time (as in never), we get: 7.5% for women and 1% for men experience anorgasmia.  I think that’s a lot more realistic.

Alright, a few people had trouble with these questions.  They didn’t know when I had started counting the minutes.  I had meant once direct genital stimulation starts, be that intercourse, oral sex, manual sex, whatever.  I’m hoping that’s what most of you thought as well.

The average time to orgasm for husbands is 8 minutes, for wives, 13 minutes.  Not quite the gap I’ve heard of from other research.  But, if you look at this another way… 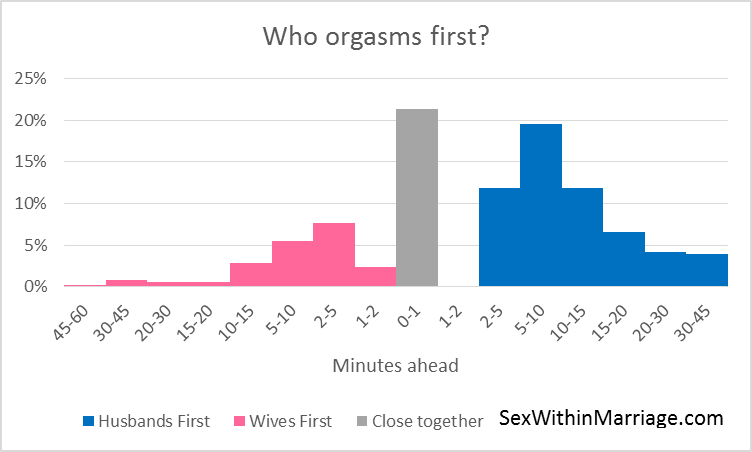 We see a bit of a different picture.  While it seems over 20% of spouses have learned to orgasm within a minute of each other, we still have the majority of husbands orgasming well before their wives.  Luckily there seems to be absolutely no correlation between a wife’s ability to orgasm and how far apart their orgasms are, and only an extremely weak correlation (0.23) between a wife’s orgasm and how long a husband takes to orgasm.

That’s basically the numbers from the survey.  I was considering sharing the comments…but there are so many of them.

So, I’m going to write four mini-posts, one on each orgasm difficulty (DE, ED, PE, anorgasmia), explore a bit more about what they are and then share the comments (if not verbatim, then the general content) in the hopes that they’ll help someone.  So, stay tuned.

P.S. I drew the names for the winners of Pulling Back the Shades…if you didn’t get an email, I’m sorry, you didn’t win (but you can still buy your own copy here at Amazon).  I’d list the winners, but I feel that would be a breach of privacy, particularly since all I have is email addresses.  Keep checking the blog, I’ve got a few more giveaways coming up, one in particular I’m really excited about … let’s just say someone sent me a VERY nice present to give to a reader.  But, I need to get some things done first, so that’s going to have to wait. 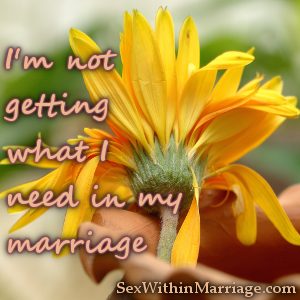 <
I'm not getting what I need in my marriage