Don’t tease unless you’re willing to follow through soon

Don’t tease unless you’re willing to follow through soon

I received this question last month through our anonymous Have A Question page: I feel like my wife is teasing me sexually. I more days that not, in fact I’d say 5 or 6 days a week she does things that arouse me. I don’t 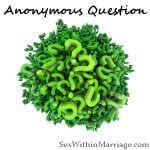 I received this question last month through our anonymous Have A Question page:

I feel like my wife is teasing me sexually. I more days that not, in fact I’d say 5 or 6 days a week she does things that arouse me. I don’t mean incidental or accidental things that turn me on. She’ll “touch” me, nibble my ear, call me by the name sexy, remove cloths/display herself for me (always in appropriate ways), ask me to remove cloths for her, etc. these are not incidental or accidental. Yet, when I attempt to initiate sex I am turned down at least 3 out of 4 times. According to my doctor I’m a low drive male, content with sex twice a week, but I’m the apparently the higher drive spouse and we have sex at best once a week. Excuses range from it’s too cold, to too hot, to “I’m tired”, to my stomach hurts, my need hurts, I’ve got a head ache. She once told me I was too tired. I assured her I wasn’t, but she assured me I was and refused to have sex with me for my benefit. I really like that my wife is visually generous with me, but at some point taking half or all of her clothing and nibbling on my ear while rubbing my crotch should signal sex is in your very near future but apparently not. One extreme example, my wife called down to me that she needed help getting out of the shower. I vaulted up the stairs leaving four confused kids watching Arthur. In minutes my naked wife was nibbling my ear and caressing my crotch while I got a few good feels in myself. Behind a locked bathroom door. I asked her if this meant we would be having sex that evening. To which she replied, yes. This was encouraging because my wife rarely promises me anything, I mean she normally won’t even promise to get groceries or pick up an Rx for me let alone sex. We completed the evening’s activities which included a few well timed ear nibbles. Then the kids were in bed and asleep two of her pre-sex requirements. She has been calling me sexy and is practically naked in bed when I show up at attention, only to be rejected. Similar scenarios have played out several times in the last year. I mean l like what she does especially showing her body to me, but 8 days of foreplay seems a bit excessive. The Bible says let our Yes, be Yes, and our No be No. So I’m having a hard time trying to figure out how this isn’t teasing, if not a form of emotional abuse.

I would agree, this is teasing, and not the fun kind.  This is emotional abuse and should not be tolerated.  However, it’s unclear what’s going on here.  Here are a few things to consider.

Talk about the teasing

During the question, I didn’t see once that you actually talked about it other than to ask if you were going to have sex tonight.  That’s not what I mean.  I mean a conversation that starts with something like

If you don’t discuss it, it’s likely never going to change.  However, even after discussing it, there are no guarantees that it will.

Set your own boundaries

If she doesn’t stop this abuse after discussing it, then you will probably have to start avoiding the teasing.  Don’t go up to “help her get out of the shower”.  If she starts anything sexual during times that you know are not going to happen, then walk away.  If she asks why, then tell her “I can’t take this sort of abuse any longer, it’s ruining our marriage”.

Start guarding yourself from the abuse.  Stop being a willing victim.

Maybe her rejection is an invitation

Now, here’s the hard part.  If she gives you a firm “No”, then you stop.  I am not condoning rape.  However, the number one fantasy among women is to be forced to have sex.  This is a mechanism to allow them to get the sex they want while side stepping the social stigma (particularly in Christianity) against women desiring sex.

And, to make matters worse, she’s likely not even aware what her plan is, if this is the case.  But, I’ve seen it in too many marriages not to discount it as a possibility.

So, what does this look like practically?  Assume you are having sex, and then just start undressing her.  Unless she gives you a very clear, firm “No”, then you keep going.  If she asks what you think you are doing, just say “Well, I’m pretty sure I’m getting you naked”.

It might not work, you might be confronted with a hard “No” every time.  But, at least then you know, she’s in it for the abuse and to control you.  She’s enjoying being in power and watching you suffer.  And then you should start booking sessions with a counselor.

Don’t tease unless you are willing to follow through

The rule in our house is that teasing is perfectly allowed, and even enjoyed…so long as sex is going to happen within the next 24 hours.  Of course, there are occasionally things that get in the way (like a baby that won’t go to sleep, or a sick kid, or just sheer exhaustion), but we know they aren’t intentional, and that the plan was the follow through.  Worst case, it will be in the next 24 hours…or 48…or 72 (if it’s a really bad week).

My point is, teasing is not a bad thing, so long as the implied (or explicit) promise is actually kept.

That’s my take on it anyways.  Anyone else have another? 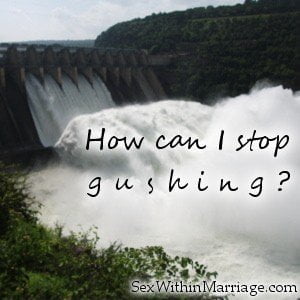 How can I stop gushing?
>