What would be on your pre-vasectomy wishlist?

What would be on your pre-vasectomy wishlist?

My vasectomy is scheduled for tomorrow.  That’s a little intimidating to write, to be honest.  Because even after all the encouraging comments I read in our permanent birth control survey responses, and even after all the research I’ve done, and knowing how low the failure 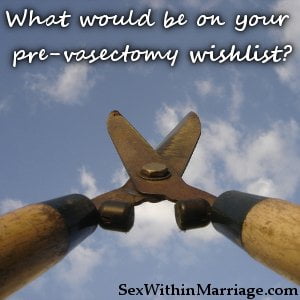 My vasectomy is scheduled for tomorrow.  That’s a little intimidating to write, to be honest.  Because even after all the encouraging comments I read in our permanent birth control survey responses, and even after all the research I’ve done, and knowing how low the failure rates, or complication rates are, I have to admit there is still a bit of lingering trepidation regarding the procedure.

I had another post scheduled for today, but this one popped up in my mind, and I wanted to write about it and post it before hand, because writing helps me process.

I think the thing that worries me the most is: what if I’m one of the very few casualties of a failed vasectomy.  I don’t mean it goes wrong and we end up with another child.  Baby #6 would still be amazing.  I’ll call that more of a surprise blessing than a mistake.  Instead, I mean the very few that come out of a vasectomy and end up impotent, unable to have sex, either due to permanent erectile dysfunction, or constant pain during sex.  Because, as low as the numbers are (and they are VERY low), it’s still a possibility.

So, what if this is my last day as a sexually capable man?  What if I can never have sex again?  What would that mean for my marriage?  Or for this ministry for that matter, because I’m not sure it’s appropriate for a eunuch to be writing about married sexuality…

But, I’m choosing not to dwell on that.  So instead I asked myself, considering that today may (however unlikely) be my last day to have sex: What would be on my pre-vasectomy wishlist, should my wife ask?

I think the typical human reaction is to ask for something selfish.  I don’t think we intend to be selfish, but our first thoughts would be: what would be the most exciting thing for me?  Perhaps an activity your spouse hasn’t consented to in the past, or something that is rarely, if ever, offered. There isn’t a whole lot that I wouldn’t consent to. 😉

But then I thought: If I couldn’t have sex again, or at least intercourse, that means she couldn’t either.  And while I know there are many other options (like sex toys, oral sex, manual sex), I know she’d miss just plain vanilla sex. I do love vanilla!! So then maybe I should pick just regular sex, because a lot of the other options would still be available, regardless of the outcome.

However, knowing my wife, if she offered, she’d want me to be selfish, because that’s the point of offering, to give a gift, probably because I’m the one “taking the risk” as it were, though really we both are.  And round and round it goes.  This is like what we call a Canadian standoff, which is when two Canadians are stuck at a doorway trying to let the other go first, or more generally: Any time two people are being too polite or differential for either to move forward.

Which leaves me with still trying to decide what I’d want, and I honestly don’t know.  After all, if you pick something you want, but your spouse doesn’t enjoy, is that really the last memory of sex you want them to have?  So, what would you do?  If today was potentially your last day to have sex, and really, any day could be, for any of us, what would you ask for?  What’s on your pre-vasectomy wishlist?  Or, for those past that, or the wrong gender to have a vasectomy, what’s on your sexual bucket list? 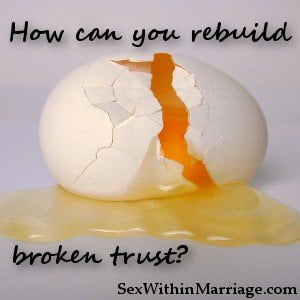 <
How to rebuild trust when it's been broken?

Sexual Side Effects of Medication
>

27 thoughts on “What would be on your pre-vasectomy wishlist?”