Here are the final results of the oral sex survey I eluded to in my post Is it okay NOT to swallow. If you don’t want to read through all the stats, you can jump to my summary at the bottom. Total Respondents 136 (52 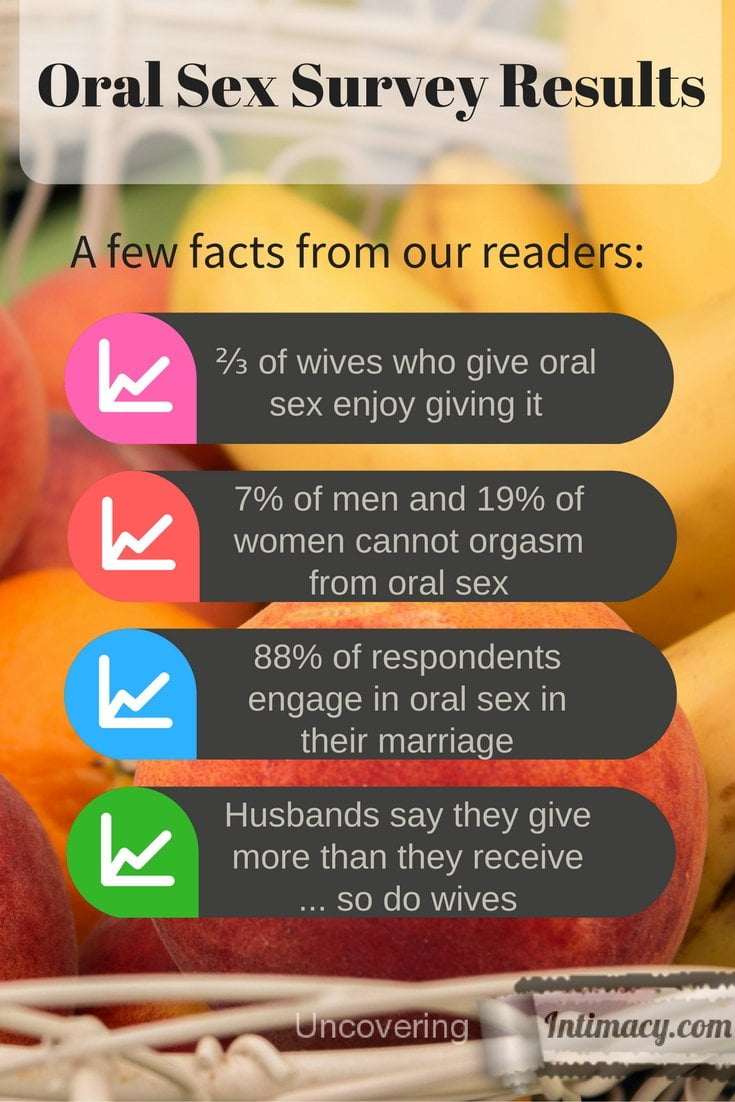 Here are the final results of the oral sex survey I eluded to in my post Is it okay NOT to swallow.

If you don’t want to read through all the stats, you can jump to my summary at the bottom.

Why isn’t oral sex practiced in your marriage?

Interesting note: We’re only dealing with 14 respondents in the oral sex survey who said that oral sex is not part of their marriage.  Never-the-less, the women either said they weren’t interested, or it was mutual, whereas the men all said it was their spouse who wasn’t interested.  This is a dynamic we’ve seen before, where the wives say something is mutual and the husbands say it is not.

What is the number one reason for not practicing oral sex in your marriage?

Data for marriages that practice oral sex (88% of respondents)

I’m not sure what to do with this.  Do we attribute the “I do more often” to flawed memory (we always think we do the bulk of the work), or to a sex-positive pool of respondents?  Perhaps both.

Do you enjoy receiving oral sex?

Do you enjoy giving oral sex?

Nearly all of the men said “yes”.  One said take it or leave it , and two said “no”, but none of the three said why.

The women were a bit more diverse.  Two thirds enjoy giving oral sex, with one third being split evenly between “take it or leave it” and “no”.  Not too many comments on this one.  Some cited sore necks, some past sexual history, and one just said “I hate it” to both giving and receiving.  Oh, and one was just sad she couldn’t bring her husband to orgasm through oral sex.  You’re not alone.

Are you able to orgasm from oral sex?

There is a stereotype that all men like blow jobs, and they all can orgasm from them really quickly.  No so!  7% of the husbands said they cannot.  The women a bit higher with 19%.

Do you allow your husband to ejaculate in your mouth?

This one kind of surprised me.  Perhaps because of my own situation, but I didn’t think this would be so close.

So, let’s start with why not.  I talked about this a bit in the last post, but here are some of the comments:

As you can see, the number one reason seems to be taste/texture/gag reflex/’gross”, which are pretty much all the same reason.

Here are some of the comments from the wives who do:

Now, from the group that allows it, 58% of them swallow (leaving 42% who opt not to).  Most didn’t give a reason either way, but the one that came up the most was that it was easier/more convenience/less of a mess to swallow than spit.

Does it matter to you if your wife lets you ejaculate in her mouth?

When asked “Why?”, those who said yes commented:

While those who said no answered:

Does it matter to you if your wife swallows?

Reasons for not caring:

Did you notice a trend in those last two questions?  I did.  It sort of answered the question I was asking last week.  Is it okay for a wife not to allow her husband to ejaculate in her mouth?  Is it okay NOT to swallow?

The answer seems to be (for the majority): Yes, it’s okay.  Does it matter?  …  Yes … it still matters.  Even those who said it doesn’t matter, in their comments, a large portion of them, in one way or another, said it does matter…but their wife’s feelings and comfort matters more.  But still, there seems to be something inside a lot of us men that craves this act: something deeper than a lust or a selfish desire, something that is an innate need.

I see a lot of talk about acceptance in these comments about this topic, and I think acceptance is ultimately what we crave.  We need, to know we are accepted, fully, without reserve by our wives.  But, I think, we mistake this need (to be accepted) for a desire for our wives to “complete” oral sex and accept something that feels like the “core” of us.  Perhaps it is just symbolic, a proxy for what we really want.  I know for me, I can do without it. I feel accepted enough.

So, what did you think of the oral sex survey?  Learn anything new?  Any interesting pieces for you, anything you were surprised by?  Let us know in the comments below.

<
Does having kids ruin your sex life?