Is it OK not to swallow?

Is it OK not to swallow?

For most of our marriage, oral sex has been very one sided.  For the first years, it was solely me performing oral sex on my wife, and never the other way around.  It took her years to get accustomed to the idea, actually it’s a 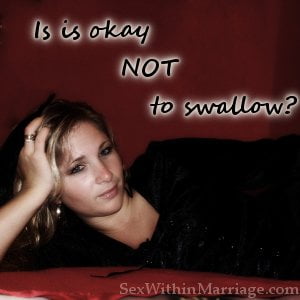 For most of our marriage, oral sex has been very one sided.  For the first years, it was solely me performing oral sex on my wife, and never the other way around.  It took her years to get accustomed to the idea, actually it’s a fairly recent development.  All of a sudden, she has realized…it’s not that bad…actually…it’s kind of a turn on to perform oral sex.  But I always knew that she wasn’t comfortable with the idea of me ejaculating in her mouth or swallowing.  She tried it twice  and was…well…repulsed I think would be the appropriate word.  The problem for me was that if felt absolutely amazing.  At the moment of orgasm, men tend to get very sensitive.  If one should happen to run their tongue across during that moment…well, orgasmic just isn’t a strong enough word…since you’re already having one.

My wife, selfless lover as she now is, decided she was going to try to conquer this aversion.  She was going to find a way to make it work.  So, for a while she tried…and this lead to a new problem…turns out I can’t orgasm if I know it’s going to cause hardship for my wife.  I’ve known for a while that my subconscious is incredibly strong with regards to sex.  I can’t orgasm from sex if I think my wife might be fertile and we’re not trying for a baby.  I can’t orgasm from oral … well … at all, because I know my wife is … not comfortable with the result.  At the same time, we’ve been stepping up the dirty talk in the bedroom, so she would get me all worked up talking about me having an orgasm while she was performing oral sex.  Now, this turns me on to no end, and, well, I think her as well, mainly due to the naughty factor.  But, again, my subconscious now kicks into overdrive, and there is absolutely no chance of orgasm in that situation, regardless of how it feels.

Now, I’ve always sort of wondered what other marriages do with regards to oral sex (don’t worry, I’ll get back to how we negotiated it in ours later in the post).  How do they finish it?  How do they deal with orgasm?  Do they swallow or spit?  What are the options out there, and what works?

So, Monday night when I was thinking about this post, I quickly created a survey and posted it, hoping for some voices to add to my own.  I’ll share some of the results now, but I’m hoping for more respondents before I do a full analysis.  So, what are people saying?  First, the majority of wives who answered (and I know, if they answered a sex survey, they are probably sex positive) said that they enjoy giving oral sex to their husbands.  In turn, the majority of those that enjoy giving oral sex, also allow their husbands to ejaculate in their mouths, and again, the majority of that group swallow.  So, if this is a “porn” thing…a lot of people are doing it.

Where does this come from

“Like an apple tree among the trees of the forest, so is my beloved among the young men. In his shade I took great delight and sat down, and his fruit was sweet to my taste.”

So, we have a few problems with this mindset.  The first is that the Bible seems to depict this act as a loving activity between spouses.  Notice that the newlywed bride says that “his fruit was sweet”.  Makes you wonder what he was eating, because I have yet to hear anyone say, or read any comment claiming that their husband’s ejaculate is “sweet”.  The most common description I’ve seen is “bleach-like”.  Assuming that’s the case, I can’t blame the women who don’t want to swallow or have it in their mouth at all.

I feel like my wife is embracing the core of what/who I am.

It makes me feel accepted.

It shows she cares in making me happy.

Feels so much closer and together, “as one”

It makes me feel special

I would feel rejected if she didn’t

It is intimacy at it’s best

These are just some short examples.  Some husbands comments went into near poetic paragraphs about how it felt to be accepted, that they felt so close to their wives.  Honestly, with some minor edits, they’re ready for Hallmark cards.  Of course, there were just as many who said “it doesn’t really matter”.  My point is, these comments, to me, do not reflect the mind of someone influenced by porn to believe their wife should because “it’s hot/sexy”.  These speak of a far deeper drive within them to be accepted.  Perhaps it is because sexuality is so close to the core of  most men that this one act should signify such acceptance to them.

So, back to my marriage

After going on like this for a few months, we listened to a podcast at OneExtraordinaryMarriage.com which raised the concept of only going as far in your marriage bed as the most conservative spouse.  After which, my wife asked me if it was OK to shelf the idea of me ejaculating in her mouth/swallowing for a while, like perhaps a couple of years, until she was more comfortable with it, if ever.  It was getting to hard for her.  She was distracted by the worry of what I was expecting, she was distracted by what might be coming.  This was not the place either of us wanted her mind to be during sex.  It should be focused on love and pleasure, not on anxiety and fear.

I’ll admit, my initial reaction was a feeling of rejection.  After listening to the podcast, I expected a conversation about oral sex, particularly swallowing, but I was expecting a very difference conversation.  It sort of went in the opposite direction as I was anticipating.  That feeling of rejection didn’t last long though.  Truth be told, it was wearing on me as well, this feeling that my wife was trying so hard to give me something at her expense.  So, we agreed to shelve it for an indefinite period of time.  No specific time we’ll bring it up, but she was clear that this isn’t a “no forever” request.  It’s been a couple of weeks now since we made that decision and I can now honestly say I am thrilled with it.  So much tension, anxiety, fear, worry, expectation gone from our marriage bed.  We are now free to just enjoy oral sex without being focused on the goal.  And you know what?  I’ve noticed that I enjoy it more now too.  It feels better in my marriage, but also physically.  I think the internal conflict was distracting me and weighing me down far more than I realized.

So, is it OK not to swallow

In the end, I think spouses need to come together on this.  I’ve been pretty clear that I think sex within marriage should be frequent, and it should be fairly uninhibited, but that said, it is not OK to dismiss a spouse’s feelings. In marriage, sex, including all sexual acts, should be offered and obtained freely, and really, most of us wouldn’t want it any other way.  So, to desire something from your spouse, be it swallowing or something else, that you know they aren’t comfortable with (and I don’t mean just a simple “We’ve never done this before”), that they really have serious misgivings about…well, it’s going to start to deteriorate what you are already having instead of increase your mutual pleasure.  Marriage should never be about taking, but always about giving and receiving.

Is there something in your marriage that makes one spouse uncomfortable?  Is it possible to shelve it for a bit to return back to later? 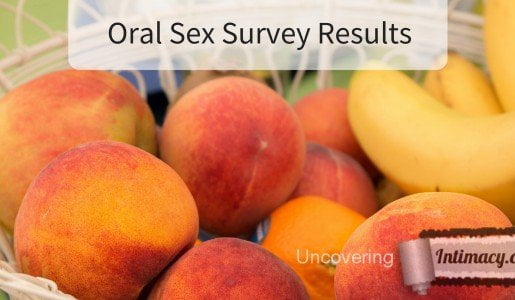 Is it okay to track how often you have sex?
>

25% off all our digital products - use coupon code FATHERSDAY
+