Sexual Side Effects of Medication

Sexual Side Effects of Medication

Another question that came in through our “Have A Question” page.  This is specifically about SSRI’s, but I think it’s applicable to just about any medication as I kept it generic enough to apply to a larger group of people. I think I need a 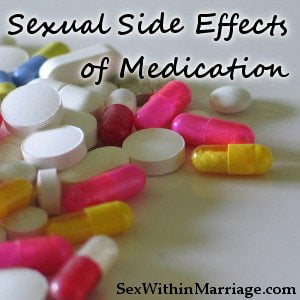 Another question that came in through our “Have A Question” page.  This is specifically about SSRI’s, but I think it’s applicable to just about any medication as I kept it generic enough to apply to a larger group of people.

I think I need a miracle, so my question is more like ‘can you pray for me’?
I have a family history of clinical depression, which I’ve been trying to treat for the better part of 15 years, since I was a teenager.  I’ve have tried everything and nothing, and the only thing that keeps me functioning and not suicidal or homicidal is antidepressants (SSRI’s, to be precise).  I’ve come to accept that, but I recently got married.  My mom always warned me that SSRI’s can kill your sex life (specifically ability to orgasm) but there was not much I could do: if I stop taking them or try alternative therapy, I have very bad side effects from weight gain to nausea to suicidal tendencies.  I just figured that since I followed God\’s will and was abstinent until I got married that He would reward me for it.
Now I am happily married for a year and a half, but have never orgasmed and really don’t have sex much.  I feel like I’m missing out on a very important aspect of marriage and I just spent the better part of an hour weeping for the loss (or lack) of intimacy with my husband.
I search the internet for treatments or ways to combat this ‘side effect’ and the only answer is “there is no treatment but to stop SSRI’s”.
So that’s it:  I either never ever have a fulfilling relationship with my husband, or I risk a downward spiral of withdrawal, sickness, mood swings, and stay-in-bed-all-day depression.
I really want prayer and support but this isn’t a subject that is appropriate for announcing at prayer meeting or discussing with my pastor or small church congregation.  I don’t have anyone to confide in, I just… need a miracle.  The first answer is finding a current website devoted to Christian sexuality, and I very grateful for that.

So, first off, yes, we’ll pray for you, and I’m sure there are many readers who will as well.  I know we have some prayer warriors out there in the community.

But, I did have some thoughts, or perhaps questions, from a non-medically trained lay-person.

I’m wondering if you’ve tried to alter the brand of medication (with your doctor’s approval and observation of course).  Some SSRI’s are very well known for killing sex drives, like Paxil, Zoloft and others.  But there are some that are not quite as harsh on the sex drive for many people.  At least, they have lower reported cases of sexual side effects.  I constantly hear good things about the Bupropion family of SSRIs (Wellbutrin, Aplenzin or Forfivo XL), the Mirtazapine family (aka Remeron), and Vilazodone (Viibyrd).  But, these are just what often cause lower.  There’s no guarantee they will in you.  It could be that those others that have high cases of sexual dysfunction as a side-effect have no effect on you.  Basically: Ask your doctor if there are some options that won’t kill your sex drive.  If they aren’t interested in discussing it, get a new doctor.  Unfortunately many doctors don’t see sexual side-effect as a serious problem.

Different dosages or frequencies can have different effects

I also know that sometimes it’s possible to change the dosages and frequencies to achieve different effects.  I’m not qualified or educated enough to even give examples, but I do know in other areas, like ADHD, doctors and patients often try switching between slow-release and quick-release medications and different dosages at different times of the day to keep down certain side effects are certain times.

For example, with ADHD (particularly inattentive type), often people will take a higher dosage, slow-release pill in the morning to get them through the entire day, but then a quick-release, lower dosage at night so that it wears off by bedtime so they can sleep better, because the medication keeps their brain focused during the day, but at night, you need to be able to let go and drift off to sleep.

Perhaps there is some pattern like that that can be used for your situation.  Again, ask your medical professional who is qualified to give proper advice.  I’m just asking questions about whether it’s possible.

Sex drive is a misleading term

Lastly, sex drive is a misleading term.  Many women think they have no sex drive because there is no force pushing them to have sex (other than their husband).  But, this is true for the majority of women.  That’s not a dysfunction, it’s fairly typical.  Women often have sex drives that are more reactive than proactive.  It might be an idea to agree to have sex even if you’re not “in the mood”, to see if you can get there once it’s started.

As for not orgasming, and not enjoying sex, that’s a difficult position to be in.  You can try more foreplay (like a full body massage), mutual masturbation, sex toys, or some less conventional activities if you haven’t already.  And you may need to learn to communicate more about what feels good during sex.  And in the end, even without orgasm, many wives tell me that sex still makes them feel emotionally connected, that it’s not critical (though it would be nice).  Of course, not everyone will agree with that, I’m just relaying what some have said.  Individual wives will of course vary.

So, in short, yes, we can pray for a miracle, but let’s not let that get in the way of asking questions about what can be done in the mean time. 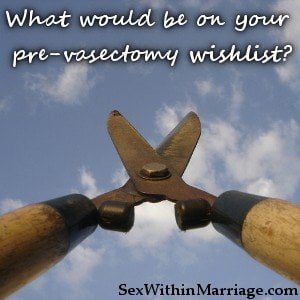 <
What would be on your pre-vasectomy wishlist?

Is it okay for a Christian couple to 'expand' their sexual circle?
>

23 thoughts on “Sexual Side Effects of Medication”