Alright, here’s a technique for those who are a bit more adventurous in the bedroom.  Just as a warning to the husbands: DO NOT TRY THIS WITHOUT DISCUSSING IT WITH YOUR WIFE FIRST.  I’ll admit, I was a bit hesitant to bring it up with 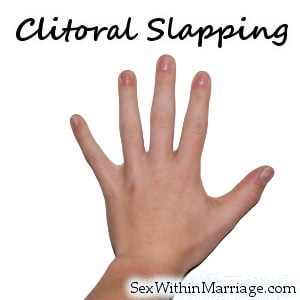 Alright, here’s a technique for those who are a bit more adventurous in the bedroom.  Just as a warning to the husbands: DO NOT TRY THIS WITHOUT DISCUSSING IT WITH YOUR WIFE FIRST.  I’ll admit, I was a bit hesitant to bring it up with my wife, but I was curious.  I had gotten some comments from emails and surveys about this activity and I wanted to see what the fuss was about.  My wife Christina joins me on this post, as usual, her comments are in purple.

Now, the clitoris is an interesting part of a woman’s anatomy, and if you have no idea what I’m talking about, I highly suggest you go read up on it.  In very brief terms, it is a very sensitive nerve cluster that can cause a lot of pleasure…or a lot of pain.  So you need to be very careful about how you approach it.  It is also my understanding (though I have no personal experience beyond my wife) that every woman’s response and sensitivity level is different, so you will need to judge for yourself if this is for you or not.  For the record, I believe my wife tends to be of the “more sensitive” variety…which made me even more surprised by her response. Although he doesn’t have any real experience on what other women feel in comparison to me. I will agree that if I were to rank it, I would say that I was on the more sensitive side, especially since having kids.

So, clitoral slapping is…well, slapping the clitoris.  I’m sure it can be done in a variety of ways and during different times in a session, but, at the risk of this being too much information, I’m going to explain the one method that I can personally say has worked for us.

How to do it

Basically you continue until you are ready to move onto something else, either because the husband’s arm is tired (believe me, it can take some endurance to keep it up), or because it’s not progressing to orgasm (but give it a decent try), or because the wife orgasms and is too sensitive to continue (and yes, women can orgasm from this. I did the first few times).

I know, a lot of you are probably thinking “Are you insane?!”  But, there is a reason to why this works.

Now’s your chance to call me crazy, but if you are feeling adventurous and want to expand your boundaries, maybe give it a shot. I only learned about this being an actual thing recently (me too), you call me naive it’s okay, but I never would have thought I would like something like this. It added a whole new thing for us to do in the bedroom. So if you are feeling like you need to spice things up or want to add something new, this might just be for you! Would love to hear if you are thinking about trying it.

Is it still adultery if you have permission?
>