Your spouse may need time to want sex

Your spouse may need time to want sex

Something that’s often hard for those of us who are interested in sex more often to understand why our spouses don’t want sex as often.  While working through my questions backlog, I saw this one, and wanted to answer it: What does it mean for

Something that’s often hard for those of us who are interested in sex more often to understand why our spouses don’t want sex as often.  While working through my questions backlog, I saw this one, and wanted to answer it:

What does it mean for my wife to say that I don’t give her time or space to want sex?

It’s not always a wife.  I’ve talked to plenty of women who have the same questions about their husband.  While it’s true that more often the husband wants sex more, this is not always the case.   Regardless of gender, what does this mean?

Sometimes we use arousal and desire interchangeably, but they’re really different things.  Men in particular often confuse these, because they often happen almost simultaneously.  Arousal is a process that is fairly short lived.  You get aroused, and you have sex, or not, within the next few hours.  If you don’t, the arousal fades.

Desire is different.  Desire waxes and wanes, sometimes over days, weeks, or even months.  Especially if that arousal ended in a “not having sex” option.  The arousal might die down, but the desire doesn’t.   It also can build if there hasn’t been any arousal.  Arousal can lead to desire, but desire can also lead to arousal.  They are interconnected, but not tightly bound to each other.

Think of arousal like the speed of a vehicle.    Some vehicles get up to speed pretty quickly. 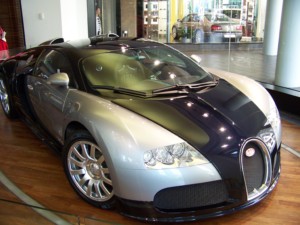 If you’re driving a Bugatti Veyron, you’ll go from a dead stop to 100km/h in about two and a half seconds.   Some people are like that.  They go from cold to racing without any time at all.  Most people take a bit more time.  Some take a lot longer.  We’ve all gotten frustrated while in traffic being behind a transport truck that takes forever to accelerate from a stop light.  But, it’s only frustrating because you’re in a faster vehicle.  The truck isn’t wrong, it’s just not built like that.  Later you get frustrated while trying to fit a sofa in your sports car and the trucker is laughing.

My point is, for a lot of people, it can take some time to get their desire up to a level where it actually registers enough to do something about.  It’s not wrong or broken.  Just created differently.

You can pull your spouse

Unlike with a sports car and a transport truck, we can actually tow our spouse to a faster speed.  Just because you aren’t feeling desire doesn’t mean you can’t get aroused.  Also, just because you aren’t aroused doesn’t mean you can’t get aroused.  That’s what happens with the majority of couples who have healthy sex lives.  One generally wants more sex than the other.  It’s not that more sex is bad for the spouse who doesn’t want it more often.  They just don’t get up to speed on their own that quickly.  So, they let their spouse tow them.  It slows down the faster spouse a bit, and speeds up the slower spouse.

The problem is when the faster spouse wants the slower spouse to actually win a race between the two of them.  If you’re the faster desire spouse and you always initiate as soon as you “get up to speed” and tow your spouse, then your spouse will never have a chance to pull ahead.  They’ll never initiate out of their own desire.

Giving your spouse’s desire a boost

That’s really what’s being asked here.  How do I get my spouse to speed up faster than I do?  Because in order for them to actually feel that desire, they either need some sort of boost, or you need to slow down.  Boosts happen, but they’re hard to manufacture.

This year, my wife broke her phone.  She decided she was going to repair it herself.  After months of getting the wrong part, being shipped broken parts, waiting for multiple packages and returns to and from China, she finally got her phone repaired, on her own and in working order.  She was so happy, she pulled me onto the bed and started kissing me passionately.  That was a boost thanks to dopamine.  She won a victory that had been building for months and her body said, “this is exciting!”  But, it was the middle of the day with five kids in the house, so it didn’t progress further than that.

That night she was too tired to actually have sex.  She said, “Don’t worry, I’ll still be in a good mood tomorrow.”  But, it wasn’t the same.  That dopamine doesn’t last long.  Those boosts are very temporary.  Like nitrous oxide, they run out pretty quickly.

Now, you can create circumstances that allow for these boosts, but it’s hit or miss.

Taking the load from your spouse

Another way is to take away anything that’s holding the slower desire spouse back.  When my wife and I went to the Dominican Republic to do mission work a couple of years ago, we stayed a few extra days to rest in a resort.  No kids, responsibilities, cooking or cleaning.  Perfect weather, beach in walking distance and a pool if you don’t want to get sandy.

Ever see a transport truck rig without a load?  Without the trailer or anything?  They’re actually pretty quick!

Now, it’s rare you get to be in a situation like that.  That was our first, and likely our only time for many years to come.  But the principle remains.  If you want to speed up the transport truck, remove some of the load.  Take away some of the stress.  Anything that hits their brakes.

Giving your spouse a head start

This is probably the easiest method in terms of execution, but the hardest in terms of keeping a loving spirit.  You wait for their desire to build.  This is incredibly difficult to do!  In fact, I wouldn’t even suggest it unless you’re really good at patience.  I can’t pull this off most of the time.  It’s just not in me yet.

The basic idea is you wait until they actually feel a desire for sex.  Now, here’s the problem:  They might never get there.  Does that mean they don’t want to have sex?  Probably not.  What it means is that they don’t feel a push to.  Most “slower desire” spouses enjoy sex, even wish they had more sex.  That trigger to push them to do it just never builds up enough.  It doesn’t mean they don’t love you, or desire you, or find you attractive.  It just means that with everything else going on in life, it’s a lesser priority at the moment.  Not that you are, just that sex is.

Do not deprive each other except perhaps by mutual consent and for a time, so that you may devote yourselves to prayer. Then come together again so that Satan will not tempt you because of your lack of self-control. – 1 Corinthians 7:5

This is why I think Paul phrased the question of whether or not to have sex as a negative.  Unless you both agree NOT to, then you should have sex.  Because just because you aren’t feeling that desire, doesn’t mean it isn’t important.

Sometimes we get too hung up on thinking about how our spouse should feel.  As if our feelings are the proper way.  We need to remember that God created us all different and unique.  Our differences in things like this aren’t a matter or right or wrong.  In fact, they give us an opportunity to grow.

<
Do Christians have sex during their period? 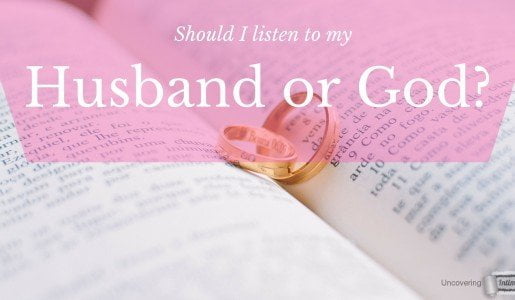 Should I listen to my husband or God?
>

7 thoughts on “Your spouse may need time to want sex”