Who should initiate sex, husband, or wife?

Who should initiate sex, husband, or wife?

I was asked this question recently over Twitter, so it’s not quite anonymous, but well, it was easier to stick with the same graphic.  Plus, I didn’t ask if the questioner wanted to be attributed, so I thought it best to keep it this way.

I was asked this question recently over Twitter, so it’s not quite anonymous, but well, it was easier to stick with the same graphic.  Plus, I didn’t ask if the questioner wanted to be attributed, so I thought it best to keep it this way.  His question is:

Who should make the first move when it come to sex..the husband or the wife?

Some will say that it’s always the man’s role to initiate, either because he should be the dominant one, or because sex is “for the man”.  But, I’m afraid I’m going to disagree, and I’ll tell you why in a bit, but first, I want to answer the question.  Who should make the first move?  Whomever thinks sex should happen!  No, I did NOT say whomever wants sex.  I said, whomever thinks sex should happen.  Why the distinction?  Because sometimes you know you should have sex, even if you aren’t in the mood at the moment.

So, let’s run down some possibilities.

If you want sex, you should initiate

Pretty simple, right?  Well, some don’t find it so simple.  In fact, I talk to many spouses who say “I keep waiting for my spouse to initiate”, or “I’m waiting for my spouse to be in the mood”.  Some wait a long time for that to happen.  The worst is when you talk to both spouse, and they are each waiting for the other to make a move!  I’ll be honest, this has happened in my marriage as well, and you have to do a face-palm when you realize that the only reason you didn’t have sex that night was because you didn’t initiate!

Now, there are some exceptions to this, of course.  If your spouse is horribly ill, or you’re in the middle of Christmas dinner with your family…maybe wait a bit.  Or, if you are dealing with some sexual issues in your marriage, there are some cases when waiting for the other to initiate can be of value.  However, for the vast majority, you are your own worst enemy.  If you want sex, you should initiate.  Yep, you might get turned down more often…but you might get more sex too.

I’m not really a baseball fan, but I hear Babe Ruth is considered one of the best hitters out there.  I’ve also heard that his hit to miss ratio was terrible, he swung at everything.  But, he also had an impressive amount of home runs, I believe he held a record for a while.  He also said this:

Never let the fear of striking out get in your way. – Babe Ruth

How many of you are letting your fear of rejection get in your way?  I know I do.  I still sometimes do, even though I know better!

If you think your spouse needs sex, you should initiate

Sometimes it’s not you that wants sex, sometimes you recognize that your spouse could really use it, and for whatever reason, they aren’t initiating.  Or maybe you can just beat them to it.  After all, this is a marriage: your in it to serve, or at least you should be.  I’m very blessed to have a wife who thinks about my drive and suggests sex when she thinks I need it.

If you think your marriage needs sex, you should initiate

Sometimes neither of you are “in the mood”, but you know you need it.  Maybe you’ve had an argument, or it’s just been a while and you need to reconnect.  Sometimes you need to recognize what would be best for the marriage, and realize that you’ll probably get in the mood once you get started.  Sex has an amazing ability to heal, to comfort, to bond you together.  That’s why makeup sex exists.  Don’t think sex can be used for comfort?  Go read 2 Samuel 12.  Here’s verse 24 for those who can’t be bothered to read the story:

Then David comforted his wife Bathsheba, and he went to her and made love to her. She gave birth to a son, and they named him Solomon. The LORD loved him

As well, we need to be careful in our marriages that our times between sex don’t become to long.  It can happen that you have a busy week, and so you aren’t really in the mood for sex.  Then another week goes by.  Then another.  Now it’s been nearly a month, and you’re out of the practice of initiating.  Soon two months goes by.  Next you start noticing all the attractive people around you in your life.  It’s a dangerous scenario.  I think that’s why Paul wrote this:

Do not deprive each other except perhaps by mutual consent and for a time, so that you may devote yourselves to prayer. Then come together again so that Satan will not tempt you because of your lack of self-control.

This is old school mentality.  The idea that men must initiate, either because “sex is for men”, which is rediculous, or because they’re supposed to be dominant, and thus should initiate.  While, I agree that men should be dominant in the relationship, I don’t agree that dominant means initiating 100% of the time.

I think these people who think the husband should initiate every time believe that somehow, the wife initiating hurts the masculinity.  I think this stems from a false belief that sex is for the men and that the women are merely here to service us.  That a woman has no business actually desiring sex, and that if she does, it makes her more masculine, and thus the husband looks for feminine, or something like that.

But this is absurd.  God created both genders to desire their spouses.  A wife wanting sex is not abnormal, not masculine, not wrong.  It is perfectly healthy.  And if you believe that a wife desiring her husband makes him less of a man…well, I think you have your paradigm upside down.  Actually, you aren’t even in the right ballpark, what makes him a man is that God made him a man.  Period.  Just like what makes a woman a woman, is that God made her that way.  End of story.  Sometimes we forget those facts, and start measuring our gender value in terms of the world’s measuring stick.  This is failing to remember who who our Creator is.

So, should the husband initiate? Yes!  Should the wife?  Yes!  Why not!  Whichever sees a need in the marriage, should jump to fulfill it.

What do you think?  Who should initiate in the marriage? 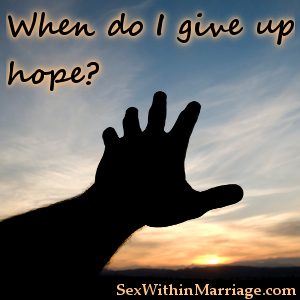 44 thoughts on “Who should initiate sex, husband, or wife?”