Should I listen to my husband or God?

Should I listen to my husband or God?

This morning I was listening to someone answer this question from one of their readers: What does a wife do when her conviction regarding a spiritual principle is different than her husbands?  For example, I have a conviction that we should be tithing. For a while

This morning I was listening to someone answer this question from one of their readers:

What does a wife do when her conviction regarding a spiritual principle is different than her husbands?  For example, I have a conviction that we should be tithing. For a while we were, but when money got tight, my husband said that we should not tithe again until all of our debt is paid off. We have school loans, so we’re easily talking a decade from now. So, what does a wife do when her conviction is not the same as her husband’s in an area like this?

And I disagreed with their response.  So, I thought I’d write my own post on the topic.  Here are my thoughts on the question.

The hierarchy given in the Bible is God, then husband, then wife, then children.  Each “level” of hierarchy doesn’t supercede the previous one.  If it did, then the children could ignore the husband in favour of the wife’s wishes.  We know that’s not appropriate, so why would God drop off the map as soon as a husband is in place?

The answer is, He doesn’t.  Just because you get married doesn’t mean that God isn’t the source of your morality.  It doesn’t mean you can start ignoring Him or even following your husband instead of God.  You follow your husband, so long as he doesn’t contradict God.

It’s like if you’re a worker in a plant and your manager tells you to do something that you know the CEO wouldn’t approve of.  Do you do it?  You shouldn’t.  Arguably, the CEO is the final authority in that company.  What if the CEO tells you to do something illegal?  Do you do it?  Of course not, because the CEO has an authority over him, the law.

In the same way, if a husband tells his wife to do something immoral, then she has a responsibility to God to say no.  In fact, I’d argue she also has a responsibility to correct him.  If done properly, that’s neither disrespectful or failing at submission.  It’s doing your job as a helper.  God help me if my wife ever things she can’t hold me accountable. Because no one else in the world sees as much of what I do as she does.  She’s the perfect person to hold me accountable to the things I said I would do.

We are each responsible for our own actions

But let each one test his own work, and then his reason to boast will be in himself alone and not in his neighbor. For each will have to bear his own load. – Galatians 6:4-5

This one is sort of backwards, but I think the principle applies.  Just as we can’t point at someone else’s work and claim it as our own, we can’t claim someone else’s decisions as ours.  We are responsible for our own decisions.

For we will all stand before the judgment seat of God. So then each of us will give an account of himself to God. – Romans 14:10, 12

The Bible is quite clear that we are all responsible for ourselves, our own actions, our own beliefs and decisions.  There’s no depiction of judgement where God said “Are you married? Oh, let me ask your husband then.”  There’s no parable for that.  Rather it’s each of us standing before Christ giving an account of what we’ve done with what He’s given us.

You cannot hide behind your husband, your boss, your elected officials or your superior officer when accounting for your decision.  If you don’t know any better, that’s one thing, but if you feel a conviction and you ignore it, the Bible is clear, you must act on it.

Wives have to learn to listen to the Holy Spirit too

The holy spirit is talking to this woman.  She is being convicted to Tithe.  That’s a proper, biblical commandment.  It precedes mosaic law, and it’s in the New Testament too, though some will argue that point.

So, not doing it would be immoral, as I see it.   If you were to listen to your husband instead of the Holy Spirit, then you train yourself to ignore the Holy Spirit.  This is dangerous!  In fact, I’d argue, that’s a path to rejecting your salvation.  That’s not something I’d ever want to suggest to anyone.

What would I suggest you do about tithing

While I believe spouses should have joint accounts and make purchases they both agree on, in cases like this, you may have to make an exception.  Here’s what I’d suggest.  Tithe on any money you take in as income.  If you’re a housewife, well, that might mean nothing.  If you have a job or career, or sell crafts on Etsy, then you can tithe on your income.

While it’s not ideal, that way your husband can stick with his convictions and you can stick with yours.  At least until they align again.  I pray the Holy Spirit will be working on his heart in the mean time.

<
Your spouse may need time to want sex 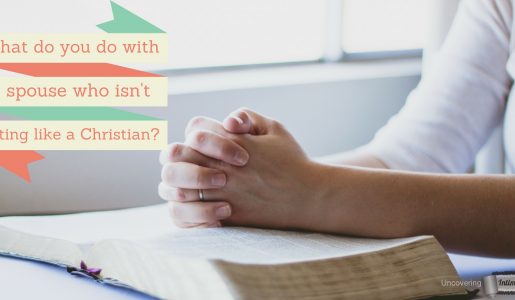 What do you do with a spouse who isn't acting like a Christian?
>

66 thoughts on “Should I listen to my husband or God?”