Is it okay to write erotica for my spouse?

Is it okay to write erotica for my spouse?

We hear all the time from Christian bloggers about the dangers of reading erotica.  A quick search found no less than a dozen posts on the topic.  However, I couldn’t find a single one (besides my own) on writing erotica from a Christian perspective. Going 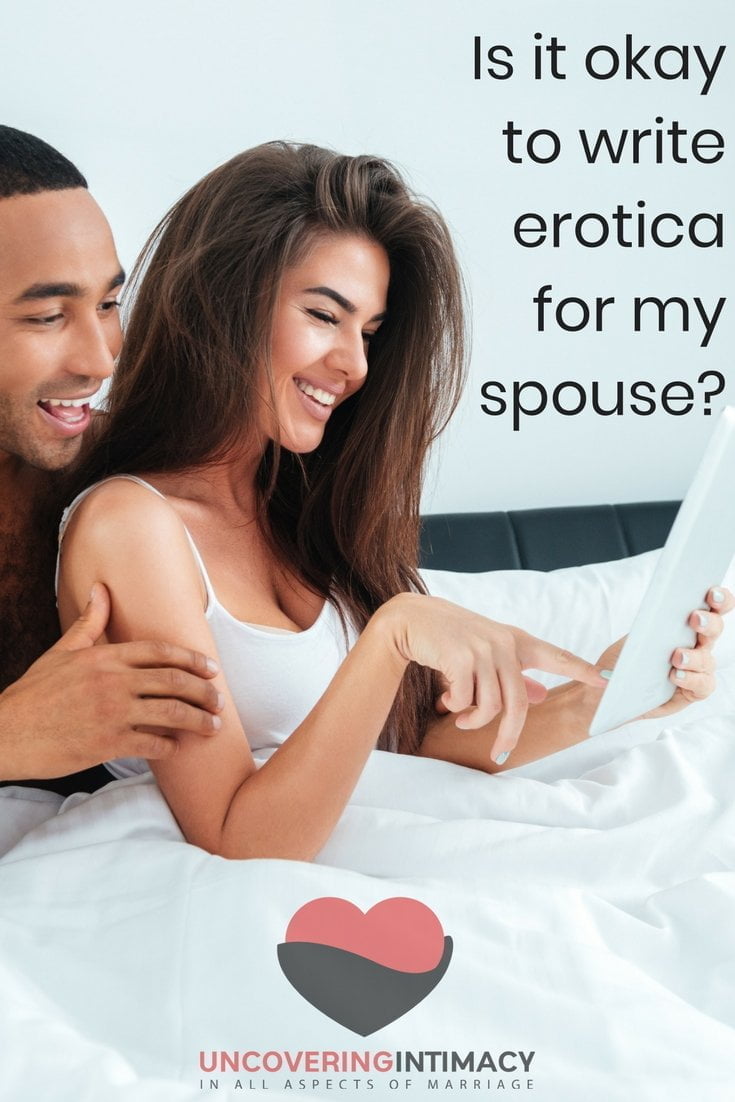 We hear all the time from Christian bloggers about the dangers of reading erotica.  A quick search found no less than a dozen posts on the topic.  However, I couldn’t find a single one (besides my own) on writing erotica from a Christian perspective.

Going through the questions on our Have A Question page, I found this one that I wanted to address today:

I’m a happily married man who dearly loves his wife. I used to be addicted to pornography, chats, etc. but my wife forgave me and now there is nothing of such nature in our relationship. My question is regarding one thing that I do not fully know what to think of it. I read your post on sensuality and how the Bible encourages it and it has been my experience that when we pursue sensuality (sexual flirtation, intimate touching, etc.) we are very happy.

As my long-term reader’s know, I have some standing rules regarding sex and whether or not something is okay.  So, let’s run through them and see how they stack up.

Is it between a husband and wife?

For most sexual activities (which I think reading and writing erotica are), this is a pretty simple check:

But when reading and writing erotica, you have an additional world to deal with.  Not only do you have to worry about what you are doing, but where it came from.  Because erotica isn’t like a sex toy or lube.  With toys, who made it doesn’t confer any quality to it (with the exception of phthalates).  But with erotica, the writer is sharing their sexuality with you.  They’re desire is to arouse you.  They’re engaging in foreplay with your mind.

Now, from my perspective, this is akin to going to a bar, making out with a stranger, then coming home for sex.  I think most of us would agree that that’s clearly not okay, whether or not you have your spouse’s permission.

For this reader, we don’t have to worry about that.  They’re writing the erotica themselves.

Secondly, we need to worry about whether or not the characters in the story are married.  Now for some this may seem silly.  After all, they’re fictional characters.  What does it matter what they’re doing?  But, we’re using this to excite the mind.

“What gets your mind, gets you” – Attributed to Rick Warren, Clerence Schilt, and various grandmothers

We have to be careful about what we let enter our minds to excite us, especially when it’s sexual, because the chemicals involved embed those neuropathways hard and fast.

If the couple in the story are not married, then we are glorifying a sinful encounter.  Not only that, but we are teaching our minds to be aroused by sinful situations, and because of the dopamine involved in arousal and orgasm, that thought can easily get imprinted into the habit center of our brain.  We can inadvertently teach our brain to be aroused by the thought of affairs, fornication and the like, rather than by godly, monogamous marriage.

And I know, that can sound alarmist.  It’s not going to happen in one offense.  This will be a death by a thousand cuts sort of situation.  One event building on another on another.  I’ve talked to wives who struggle to get aroused without erotica, because their mind craves those situations they read about in their stories.

The good news is, it can be undone, but its slow to unravel those pathways.

Anyways, my point is that in erotica, we need to not only make sure that the story is written from spouse to spouse, but that the characters are the spouses, and engaging in moral acts themselves.  But this still begs the question of where the line between the characters being true or false is.

Having an affair with someone who has your spouse’s name isn’t any better than someone who doesn’t.  Likely in erotica, having characters with your names but aren’t acting in keeping with their character is more like reading about someone else’s sex life.  You’re bringing other (albeit fictional) people into your bedroom.

And there you’ll have to make a decision for yourself of where that line is.  Writing erotica for your spouse can be a safe way to explore boundaries, fears and discomforts you might have regarding sex.  You might have yourself, as a character, do something you normally wouldn’t.  But then we do things that are out of character for ourselves in real life sometimes too.  I guess what I’m saying is it’s okay to push the edge of of their character, so nudge them in directions they might normally not go, but perhaps might grow towards.  But there’s a large difference between that and breaking their character in a story and slapping a “spouse” sticker on it.

For example: If my wife has a nearly 100% responsive sex drive, then writing a story where she’s suddenly chasing me around the house for sex all day long is not only inappropriate because I’m fantasizing about someone else and slapping a “wife” sticker on it, but it’s also potentially harmful.  If she read it, my wife would probably think I’m unhappy with her sex drive and that what I really want is someone like that, and if your wife struggles with having a low drive already, then she’s probably already feeling insecure about that.  Compounding that stress is certainly not going to help.

Now, if you have a story that has extenuating circumstances, like being on vacation, being apart for a couple of weeks, or something else exciting, something that could explain an increase in sexual excitement and a decrease in inhibitions, then you can push the boundaries of the character a bit more.

My point is, make it realistic.  Don’t just make up a fantasy, slap a spouse sticker on it and then call it godly.  That would be like marrying a prostitute, having sex, then divorcing her just so you wouldn’t commit fornication.  Completely missing the point.

Is it enhancing intimacy or stealing the focus? 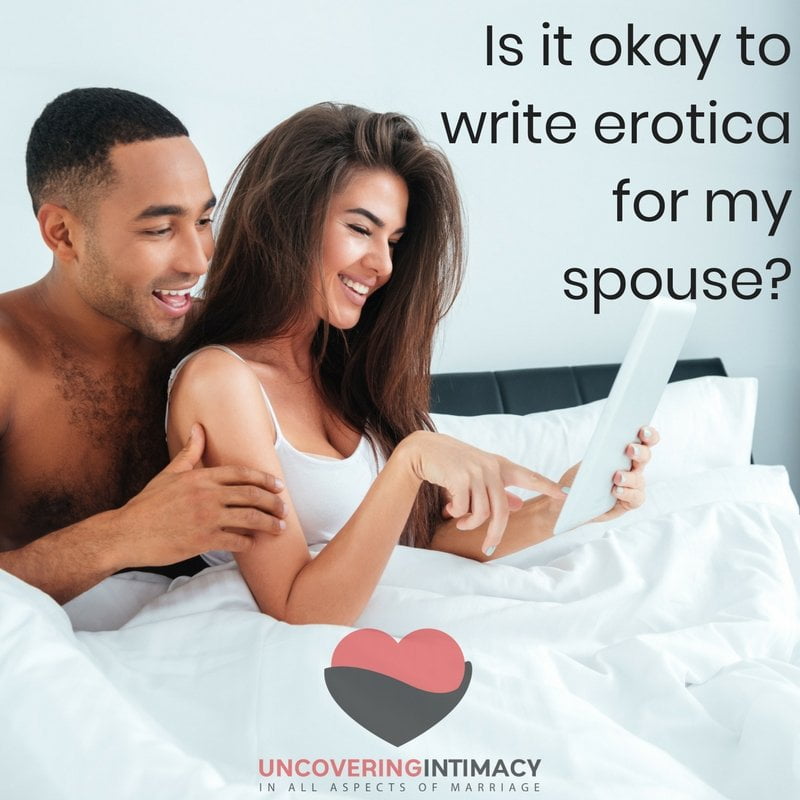 Another issue we get into whenever we add anything to the bedroom, be it a new activity, erotica or toys, is that we need to ensure that the focus doesn’t drift to the thing that’s supposed to be improving intimacy.

And we see this happen all the time.  Women who read romance novels are statistically less happy in their marriages.  Some may be reading the novels because their unhappy, but the novels contribute to that unhappiness as well.  I also remember a study (that I wish I could find), that survey people going to see a romantic comedy, and people after they’d seen it.  Those women in relationships answered that they were less satisfied with their relationship after seeing a romantic comedy.  Why?  Because it depicted an unrealistic expectation.  It created a scenario that cannot be naturally lived up to.

Things like toys, erotica, even lubricant, all do the same thing.  Toys produce sensations that can’t be replicated by a human.  Lubricant comes in synthetic varieties that are frankly unnatural, and erotica lets you focus your mind on sex in a way that’s difficult to replicate in a real life scenario.  Are these things bad?  I don’t think so.  But, I think if you get to the point that sex without any of them is “not worth it”, then you have an issue.

Sort of like if you need to be in a church to pray, then there’s a problem.  Churches let you block out the world, sort of make you focus on God.  There’s worship music and a community of believers that all enhance your ability to focus on God.  But, if you need church to talk to God, then you have an issue.   Bet that’s the first time someone’s used a church service as a metaphor to discuss sex toys and erotica …

Are both spouse’s okay with it

If they can’t bring themselves to read it, well, then I suggest you stop writing them.  Continuing will be developing part of your sexual life separately, and that’s not going to help anyone.  It just just make then feel left behind or distanced, which won’t help.  This will become a wedge driving your marriage apart rather than something that can bring it together.

So, keeping those rules / guidelines in mind, I’d say go for it.  Have fun!  As for why you still have bad feelings about it, there could be a few reasons.  It could be you’re having trouble accepting forgiveness for your past.  It could be anxiety about falling into old practices.  It could also be Satan trying to stop you from reclaiming something he’s used to destroy your marriage and using it to build it up.  I don’t know.  But if you want to talk through it, shoot me an email (jay@uncoveringintimacy.com).

If you have a question you’d like to ask anonymously, visit our Have A Question page, and even if you don’t, check it out and you can read other people’s questions and vote on the ones you’d like answered next.  And don’t forget to comment below and let us know what you’d tell this reader if they had asked you.

<
What do people do about cleanup after sex?

If initiating sex is uncomfortable, start with initiating precursors
>

4 thoughts on “Is it okay to write erotica for my spouse?”