How To Spice Up Your Sex Life

How To Spice Up Your Sex Life

OK, I know, I know, every blog about marriage, relationships, etc has at least one article with that title.  They usually have a large list of techniques, activities.  Maybe they suggest a blindfold (gasp).  But that’s the easy stuff.   I think you want something

OK, I know, I know, every blog about marriage, relationships, etc has at least one article with that title.  They usually have a large list of techniques, activities.  Maybe they suggest a blindfold (gasp).  But that’s the easy stuff.

I think you want something that will really spice things up.  There’s only one.  But it’s a game-changer.

I’ll do my best to explain it.

The grey circle is “His Boundaries”. These are the things that the husband is willing to do.  Since we’re talking about sex, this will be a subset of all the sexual activities possible.  Inside this circle (I hope) would be things like:

Now, keep in mind, this circle is EVERYTHING he is willing to do, whether he’s aware of it or not.  Outside of the circle are all the things he’s not willing to do.  Somethings, I believe, rightly belong there in a Christian marriage.  Such as:

But there are probably some others that are not right, nor wrong, he just doesn’t want to do them.

The pink circle is “Her Boundaries”.  These, like the husbands, are things that the wife is willing to do.  Extrapolate from the list above with some variation for personal preferences.

Then we have a box called “Known Boundaries”.    Now, I’m guessing on this is true for most couples based on my marriage, but as time went on, we expanded into some sexual activities that we didn’t know existed when we got married as we had no experience. If you’ve been reading this blog for a while, or bought Our Sexploration List you might have come across some activities you never knew existed. At the beginning of our marriage, our “Known Boundaries” box was basically a sliver compared to now.

After the honeymoon it had grown a fair bit.  After 11 years, it’s grown much more.  As we continue to explore each other, we learn new things about each other.  In most cases, our boundaries haven’t shifted, we just learned more about what they are by experience.

For example (a fairly innocent one) to clarify the point:

Last week I learned I like having my ear lobes kissed during foreplay.  It makes my spine tingle (in a good way).  My wife has never done that before, and so I’ve never experienced it.  So, our “Known Boundaries” box got larger on both our ends.  My wife learned that that’s inside her boundary to do to me, and I learned it’s inside my boundary to receive it from her.  The boundary didn’t shift, we just discovered another thing within the border.

Here’s where it gets a little tricky.

Then, we finally get to this overlap in the middle.  Where husbands and wife’s preferences overlap.  This is generally a fairly small area.  Then, we cut it down even more to only include the “known” aspects of those boundaries, and that’s where 99% of your sexual life is with your spouse.  That little overlapping area in the very middle.  That’s all the stuff you do in bed together.  Why?

So, you’re probably asking now, where’s the tip on how to spice up our sex life?  And this is it, understand this system of boundaries and overlaps.  If you do, you’ll see there are really only three options:

Opportunities To Spice Up Your Sex Life

That’s it.  Simple, but a game changer I think.  Stop looking for the latest trick that will only grow your “Known Boundaries” box by a fraction.  Instead, look for inner growth.

Now, here’s your homework: Are there any activities you’re denying your spouse without good reason?

<
All You Want Is Sex 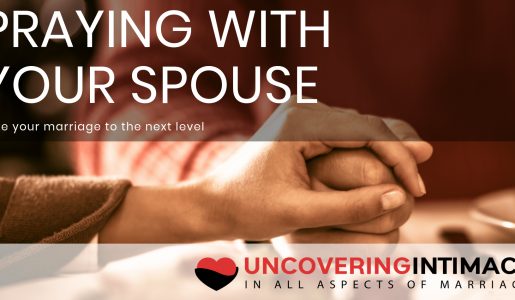 Praying With Your Spouse
>

17 thoughts on “How To Spice Up Your Sex Life”