All You Want Is Sex

All You Want Is Sex

One of our largest topics of conflict (in the past) is that I (from her perspective) “want sex all the time”.  I have a pretty hard time denying that allegation, because, well, it’s true. I see this theme a lot in my readings on message

One of our largest topics of conflict (in the past) is that I (from her perspective) “want sex all the time”.  I have a pretty hard time denying that allegation, because, well, it’s true. I see this theme a lot in my readings on message boards, blogs, Facebook, Twitter, etc.  Statements like:

And yes, I know in many relationships, the wife has the higher sex drive, but either it’s a relatively small portion of the population, or they are far less outspoken.  Add to that the fact that I am in a husband-has-higher-sex-drive marriage, and you can understand why I’m going to write from that perspective.  You’ll have to let me know if things translate to the opposite dynamic, because after 11 years of marriage, I’m still trying to figure out how my wife’s brain works.

Anyways, back to the topic at hand.  Why do so many husbands want sex “all the time”?  I think the answer might not be what you think.

Women are generally thought as the one in the relationship who feels more connected, they have a stronger bonding experience than the men.  Why is that?

Well, it’s a natural drug in our system called Oxytocin.  Oxytocin, among other things, is the hormone that causes us to feel bonded to someone else.  And generally, it is women who dominate the market on Oxytocin.  They receive large boosts during pregnancy while giving birth, breastfeeding, and during/after sex.  They generally have 10 times the levels of this hormone than men have.  No wonder they’re so bonded.  They have emotional superglue coursing through their veins, particularly after sex. It takes them about 2 days for the Oxytocin levels to return to normal after a sexual encounter.  This means for 2 days, they feel the emotionally bonding effects of sex without having to have sex again.

Men are different creatures.  Oxytocin is a scarce commodity in our bodies.  We get our largest dose during sex, at orgasm actually, where it jumps to 5 times its normal levels.  This brings us close to what women have as a baseline.  For a short time, we can experience that feeling of bonding like them.  Have you noticed that your best talks in bed immediately after sex?  We sometimes stay up for another hour or two just talking before falling asleep, despite the fact that we were exhausted.  We used to wonder why that was until I stumbled across this a few years ago.

Here’s the wrench in the equation though, 30 minutes to 2 hours after orgasm, we’re reset back to normal.

And we miss that connection.  Something doesn’t feel right.  We want to be close to you, we need that Oxytocin, and there is only one way to do that: have an orgasm with you.

Now, don’t get me wrong, there are other things involved (sex feels awesome!), but, for me, and many men I’ve talked to, it’s that feeling of closeness that beats everything else. 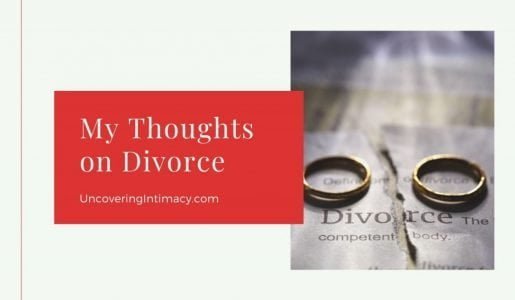 <
My Thoughts on Divorce

How To Spice Up Your Sex Life
>