What Is Your Goal?

What Is Your Goal?

I often read, in forums and comments, complaints from one spouse or another who isn’t getting what they want out of sex. Sometimes it has to do with a very simple problem of the spouses not knowing each other’s goals in a sexual encounter (or all of them).

I often read, in forums and comments, complaints from one spouse or another who isn’t getting what they want out of sex.  Sometimes it has to do with a very simple problem of the spouses not knowing each other’s goals in a sexual encounter (or all of them).

So, what are some potential goals for a sexual encounter?

This is typically the default goal.  You have sex until you (hopefully both) orgasm, then you’re done.  I’m afraid in my marriage, this is generally the goal as well, but thinking about it, why is that the goal?  Does orgasm define how pleasurable the sex was?

I bet you’ve had amazing experiences where the orgasm ended up being more of a disappointment than anything because the sex felt better than the orgasm itself.  Then sometimes you have those orgasms that just blindside you and come out of nowhere from a night of mediocre sex (which, admit it, happens).

Another problem is orgasm as a goal is that sometimes it’s just not going to happen (especially for women).  Most women don’t orgasm during every sexual encounter, and many women are pre-orgasmic (they haven’t had an orgasm in their life, yet).  So, if you focus on the orgasm, sometimes that’s too much pressure, and focusing on it will actually hinder achieving it.  Other times the pressure ruins the entire event because the “goal” wasn’t achieved.

Now, is having an orgasm as a goal a bad thing?  Not always.  Sometimes you just want a quickie in order to have an orgasm, and there’s nothing wrong with that, so long as it’s not every time.

Sometimes it’s also fun to “race” to an orgasm (see who gets their first) if you tend to orgasm at about the same rate.

Ever had an amazing night of sex where orgasm wasn’t the point?  Everything just felt amazing, and you flowed with whatever felt good.  Maybe you didn’t even end up having an orgasm at the end, but the pleasure was out of this world.

These are the types of sessions I’d like to have more of, where orgasm isn’t the “finish line” that we’re chasing, just pleasure itself.  So, why don’t we do this?

So often, the rest of life gets in the way, sex becomes a means of stress reduction (orgasm relieves stress), we don’t really have that much time and need to get to sleep, so we try to get it over with as soon as possible.  Not that we don’t enjoy sex, but we have things to do.

I want to find a way to slow down, take the time and just enjoy sex, without a thought of what time it is, when the kids are going to be up or what I have to do in the morning.

This is what vacation sex is all about when you don’t take the kids with.

Maybe you’ve read about a position you’ve never tried, or you just read an article about the G-Spot and wanted to explore it.  These are the nights where orgasm isn’t the main goal, and pleasure sort of is, but only as a byproduct, your main intent is to explore and learn, try new things.

I’ve heard some sexologists talk about having a “sex lab”.  These are specific sessions devoted to learning new things about sex.  Now, they aren’t as picky about their partner as we are, but I still think this is a great idea.  Why not set aside a night every once in a while, just to explore, to touch and test out new sensations, try a new technique, method, position, where the goal isn’t orgasm, pleasure or anything else other than trying to figure out how to please your partner better.

Trying to conceive can sometimes be a completely new ball game, particularly if you’re having trouble.  It can start to feel like a precisely timed and pre-planned event, with no romance, no excitement, no spontaneity.

Make sure you take a break from procreation to remember why sex is fun.

You know when you get home from a long trip without your spouse, or you haven’t been able to connect in a while, even though you’ve seen each other every day.  You finally get to bed and sex is tender, lots of kissing, lots of eye gazing, just touching and caressing.  No one is rushing, the world falls away and it’s just you two together.

These are just some of the main goals we tend to have during sex, there are other goals as well such as comfort and exercise.  The problem occurs when you and your spouse have different goals for a specific encounter.  For example, if your wife thinks your trying to conceive, and you think you’re going for exploration, she may get quite annoyed, because, well, she’s in baby-making mode, and what your trying to experiment with might not make a baby…

Or maybe you’re interested in a long drawn out pleasurable evening, and your wife is pulling out all the stops to make you orgasm thinking you’re going for a quickie…OK…on second thought, you might be OK with that for the first…20 or 30 times.  But after a while, you might want some “gourmet” sex instead of “fast-food” sex.

So, how do we solve this?  Of course, as many times, the key is communication.  Talk to your partner.  My wife sometimes says while climbing into bed “so..it’s late, so we’re going to be quick right?”  Which, granted, might not be the sexiest thing to say before sex, but it is pretty clear, and I am one who particularly needs clear direction and signals.

How about you?  Do you always go for the same goal?  Or do you mix it up intentionally?  I challenge you to talk to your spouse about this if you haven’t already. 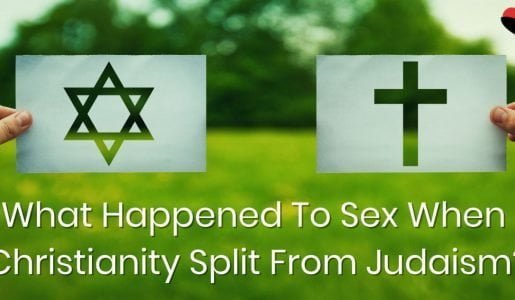 <
What Happened To Sex When Christianity Split From Judaism?