I had high hopes. It has some good basic concepts, but also some serious issues that cause me not to be able to recommend this book.

I was really looking forward to reading this book.  The concept is amazing.

This Christian family has a tradition, for 8 generations (at least, might be more), the grandmothers have sat their granddaughters down during their engagements and unloaded everything they know about sex to them over a week or two visit.  Completely in private, no one around, giving time for questions, repetition, and time to let all the information sink in.

I love this concept.  I hope I can remember to do with this my grand children.

The book came about because one of the daughters became terminally ill and couldn’t bear the thought of breaking the tradition.  So, she started typing out everything we wanted her granddaughters to know.  Eventually, word got out (discretely among the other wives) and they started adding what they knew and were taught, and learned on their own to the body of knowledge.

Now, I thought this was the holy grail of sex knowledge.  8 generations of a large Christian families sex tips and tricks including a former lesbian and a former high-end call girl.

Now, here’s the catch, there are two problems:

There is nothing new here

Now, granted, I’m fairly well-read and have been researching sexuality since the age of 16 (probably too early), but there was nothing really groundbreaking in this body of work.  Don’t get me wrong, it’s a pretty good manual, but you can get this information just about anywhere, with all the buildup of the introduction, I was expecting some fairly new, radical things.  Not so much.  This really isn’t a huge con, just was oversold.

I disagree with some major points

There are a few points I strongly disagree on:

Fantasies – They are OK with fantasizing about other people/partners.  They draw a very fine line between “Wanting to pretend to have sex with someone” and “Really wanting to have sex with someone”.  For example.  I see my neighbour’s wife bent over doing some gardening, and then start fantasizing about having sex with her out on the lawn.  This book would see nothing wrong with that, because, in real life, there is no way I’d want the hassle of dealing with 2 broken marriages and all the fallout.  They would say “that’s fantasy, not lust”, thereby nicely side-stepping Matthew 5:28

But I tell you that anyone who looks at a woman lustfully has already committed adultery with her in his heart.

To me, they are redefining words to suit their desires.

Given these three points, I couldn’t give this book as a gift without a letter containing a disclaimer.  That said, the bulk of the book is a good starter for people who know nothing about sex, and at $0.99 on a kindle, it’s hard to turn down (provided you can internally edit well).

But, do not give it as an engagement gift unless it comes with time personally sitting down with them and discussing these topics from a Biblical perspective (and you have to know your Bible well because the book will use it to support the author’s perspective).

If, after all that, you will want to buy it, here is the link to the book. 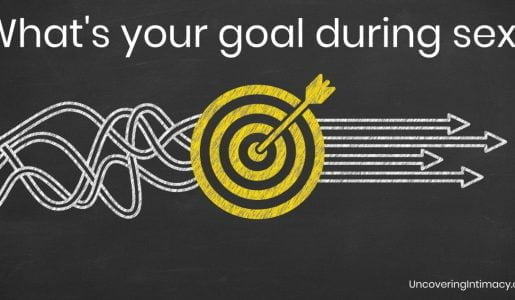 <
What Is Your Goal?