Orgasm does not equal pleasure

Orgasm does not equal pleasure

Yesterday I was writing about some orgasm facts. And my last one. Which I wanted to split into a separate post, is that orgasm does not equal pleasure. Unfortunately our media keeps telling us differently.  Cosmo covers are full of orgasm tips, positions for better 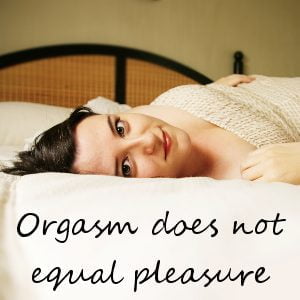 Yesterday I was writing about some orgasm facts. And my last one. Which I wanted to split into a separate post, is that orgasm does not equal pleasure.

This has the effect of making us believe that not only does orgasm equal pleasure, but that orgasm is the goal of sex.

You can have an orgasm without having pleasure

As I mentioned yesterday, orgasm is a function of two major systems and a bunch of other ones.  Sometimes orgasm has a lot to do with what’s going in in your brain.  It’s even possible for some few women (it’s extremely rare in men) to have an orgasm without being touched.  This is because our brains have a strong say in what makes us aroused.  However, mental arousal is only half of the puzzle.

It’s also possible to have an orgasm without being mentally aroused.  And this is something our culture has tried hard to ignore or bury, and it’s very unfortunate.  In fact, it’s damaging and even dangerous.

Myth: If you are wet, then it means you want what’s happening

One such example is from 50 Shades of Grey.  I have not read the book, except for one section.  I only read it because someone alerted me to it, and I just couldn’t believe it was true.  Well, it is.

There is a scene (Chapter 16 for those who care) where the lead male character spanks the lead female character, repeatedly and to the point of making her cry out in pain.  She doesn’t want to be spanked.  In fact, she’s restrained at the time.  She doesn’t enjoy it, but her body reacts.  Why?  Because of arousal non-concordance.  Her brain noticed a sexual context and responded.

However, the lead male inserts his fingers inside of her, proclaims her to be “wet”, and therefore says she enjoys is.  He then proceeds to have sex with her.

Reframing the scene thanks to arousal non-concordance

Now, if you don’t know about arousal non-concordance, I can see why the hundreds of thousands of Christian housewives who read this would think it’s incredibly erotic.  Because women have been taught that they’re not allowed to enjoy sex, this looks like a liberating experience.  The man lead her to sexual pleasure she wouldn’t have been comfortable with, and because she lubricated, that means she “really” enjoyed it, and so it’s a good thing.  She gets pleasure, without the guilt of wanting something sexual.  And for a housewife in a loving relationship, I can understand this.  I mean, if you have a committed, loving relationship, and your spouse has permission to arouse you, then yeah, go ahead and do things you are willing to do in order to get aroused at times when you just aren’t feeling it.

But that’s not the case here.  These two are not married, this is her first sexual relationship, she’s tied up, and specifically says she doesn’t want to do this.  So, if you know about arousal non-concordance, the narrative takes a disturbing turn.  I read it like this:

The man in power (a 27 year CEO) tied down a younger woman (a college student reporter).  He sexually assaulted her.  Then he convinced her she enjoyed it, and proceeded to rape her based on that premise.

Myth: If you have an orgasm, then you “really” wanted what was happening

And you may think I’m exaggerating here, but this is a serious issue, especially in a world where one in three women experience sexual assault.  Because here is what happens a lot of the time:  A woman is sexually assaulted, but her body responds.  Her brain just sees “this is a sexual context” and so self-lubricates, her genitals engorge with blood, and she’s physically aroused, even though she may be mentally terrified.  In fact, while her body is gearing up for sex, her brain may be shutting down in “freeze” mode because the stress is so real and imminent that her brain just basically shuts down to escape reality.

This is the same thing that would happen if a lion attacked you.  Your brain either goes into fight (I can take the lion), fright (run away from the lion) or freeze (I can’t fight or run away, so I’m going to play dead and hope it goes away).  Well, since men are typically stronger and faster, many women just shut down.  It’s too big of a threat to deal with, so their brain checks out.

And sometimes what happens is that she has an orgasm, because there’s still sexually relevant stuff happening, there’s still physical arousal building up, there’s still tension there to be released, and the part of her brain that’s supposed to be saying “THIS IS NOT OKAY!” has checked out.  And that’s very confusing if you don’t know what’s going on.  Because many of these women are then convinced, by their assailant, by themselves, or by others, “Well, you got wet, you had an orgasm, you must have really wanted it.”  No!  She didn’t!  Her body just reacted.  Because orgasm does not equal pleasure.

Sexual myths like this cause long term psychological pain and confusion

And so this woman goes through life very confused about what happened, what she responds to sexually and if maybe she really did want to be raped.  The man walks away thinking “I didn’t rape her, she really wanted it”, and so goes on to have more encounters like that, believing, incorrectly, that everything is consensual … if only in retrospect.

And I wish we could stop this narrative from continuing, so we could tell women who have been in this situation, who are confused that it’s not okay what happened to them, that it doesn’t mean they enjoyed it or welcomed the assault.  That it’s not their fault.  Maybe more women would get help if they knew.  So, please, tell people about arousal non-concordance.  It’s not a “cool” sex thing.  It’s important.

Alright, I’m going to get off my soap-box now so we can continue.

What does this mean for our marriages?

That our goal in sex shouldn’t be orgasm.  After all, if you can have an orgasm without having pleasure, then having an orgasm should not be your measuring stick for whether your spouse enjoyed sex.  And I know some of you use orgasms as your gauge!  I know, because you tell me.  I get emails that say things like:

My wife says she enjoys sex, but she doesn’t always orgasm.  Is she lying to me?

And when I tell them about arousal non-concordance, and about orgasm statistics, and about how orgasm should not be their gauge, the next question is usually:

Well, how will I know she enjoyed herself then?

And my regular readers can probably guess the answer: Ask her! Will she lie? Maybe.  But her orgasm can lie too.  She could even fake an orgasm (Women: don’t ever do this!).  My point is, you are far more likely to get an accurate answer if you simply ask.

You can have pleasure without having an orgasm

Orgasms shouldn’t be our goal in sex.  Pleasure should be.  Connection should be.  Intimacy should be.  Don’t get me wrong, orgasms are good.  And they can be a method of getting pleasure, building connection and intimacy.   This is especially true for men, because orgasm makes our oxytocin levels jump through the roof.  For women, oxytocin levels are generally as high as our’s peak during sex.  I think this may be why many women are less interested in orgasm.  Or rather, are less dependent on orgasm in order to feel the same benefits. They don’t need it as much to feel that same emotional connection and intimacy.

That doesn’t mean women don’t want orgasms!  What it means is that if your wife says she’s okay not having an orgasm on a given night, believe her.  She’s probably not lying.  In one of our surveys we found that about 75% of women don’t orgasm during every sexual encounter and most are okay with that.  Yes, some orgasm every time, and some orgasm multiple times every time, but most don’t.  I think women generally understand that pleasure does not equal orgasm.  It’s us men who often have the problem.  And for men, orgasm does often equal pleasure, but we mistakenly think that women’s sexuality is the same as our own.  We think that if our wife doesn’t have an orgasm, then we’ve done something wrong, that she didn’t enjoy herself.

Stress about orgasming makes it harder to have an orgasm

And we need to stop that mentality, because often what happens is we build up a lot of pressure for our wives to orgasm, this pressure creates performance anxiety for them, which is a type of stress.  From a physiology standpoint, stress releases cortisol which counteracts dopamine, which is needed for arousal and orgasm.  From a psychology standpoint, this stress is a trigger for the sexual inhibition system which plays a large part in whether or not one feels mentally aroused, which negatively impacts their ability to orgasm.  In short: pressuring your wife to orgasm is less likely to make her orgasm.

Wives, the same goes for men.  If your husband suffers from either erectile dysfunction (ED) or delayed ejaculation (DE), then pressuring him to orgasm will only make the situation worse.  And as much as you may want to say “well, he needs to just suck it up”, the truth is it’s a chemical reaction.

Stress chemically counteracts arousal.  All kinds of stress, be it “hurry up and orgasm” or a bad day at the office, or the children being difficult, or the dishes left in the sink, or the negative balance in your bank account.  These are all stress factors in our modern life, and they will all affect your ability to orgasm.  More and more in our increasingly stress filled lives, we need to understand that orgasm does not equal pleasure, because we can still have fun, even while we’re having orgasm difficulties.

For those who made it to the end, or just skipped to the end, my point is: Orgasm doesn’t equal pleasure.  Don’t make orgasm your goal.  Believe your spouse when they say they enjoyed themselves. 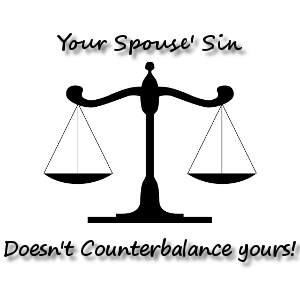 <
Your spouse' sin doesn't counterbalance yours 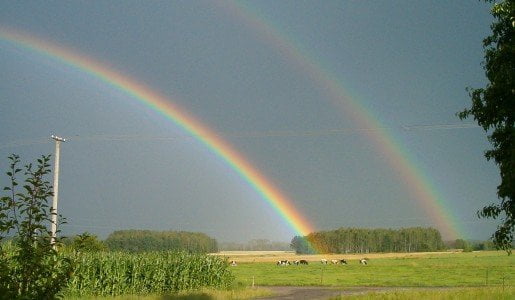 17 thoughts on “Orgasm does not equal pleasure”