The most common answer I give to marriage questions

The most common answer I give to marriage questions

I get a fair bit of email from the blog.  Some days it comes in like a flood.  Other days it’s more like a trickle.  I’ll be honest, I like the flood days better.  I like helping people.  I like seeing people reach out to

I get a fair bit of email from the blog.  Some days it comes in like a flood.  Other days it’s more like a trickle.  I’ll be honest, I like the flood days better.  I like helping people.  I like seeing people reach out to fix their marriage.  I like it when people are willing to risk the fear or embarrassment of talking about sex in order to ask a question they really need to ask.  I like being able to provide a safe place to do that.  And while I like getting questions through our anonymous Have A Question page, what I really like is dialogue over email, or even better, Skype calls with my coaching clients.    In those, we really get some stuff done.  It’s awesome to hear people’s marriages changing over the phone.

Today I thought I’d share what is probably my most common response to questions that I get asked.  It’s fairly straightforward.  In fact, those who have read the blog for a while can probably guess what it is.

Talk to your spouse.

Now, usually it’s framed in a different way.  Something like “what do you think your spouse would say if you asked …”.  Or “have you asked your spouse what they think of this?”  If we had a room full of all the people who have emailed me over the years and I asked “How many people have I told to go talk to your spouse or suggested that you should talk to your spouse more?”, I think there would be more hands up than down.

And I understand why.  It’s scary.  Last week I wrote about how intimacy is risky.  In fact, it’s so risky that more often than not, couples don’t talk to each other about the really important things.  They’d rather talk to a stranger on the internet (me) than turn to the person they should be the most open and honest with, that they live with day in and day out.  Don’t get me wrong, I’m not saying don’t email me, I completely understand why people do, and I’m thrilled that their doing it.  Not because I want to get all the sordid questions, but because there’s a lot of terrible advice out there that will tell you to do anything but talk to your spouse.

But, I also know there are a ton of people who will never get up the nerve to email.  They won’t ask the question, either because their too scared of sharing (don’t worry, I’m safe), or their worried that I’ll think their weird (I can almost guarantee I’ve heard weirder things that you’ve got going on, but I’m willing to move the bar if need be).  Or, their worried that if I tell them what they already know (which is what happens most of the time), that they’ll actually have to act like an adult and do it.

So, for those who won’t email me, to most of you, my answer is this: “talk to your spouse about it”.  Now, usually I have a bit more constructive context to go with that.  Often the next question is “How do I start that conversation”, and that depends a lot on what’s going on, but I’ve scripted a lot of conversation starters for people over the years.  Always with the instruction: put this in your own words!

So, really the answer is:  Talk to your spouse and be honest.

And yeah, it’s risky, it might damage your relationship … but maybe it needs to be damaged so that it can become stronger.   Like re-breaking a bone so it can set properly.  I’d say most of us have marriages that, at least once, need to be broken and reset.  I’m not going to say the risk isn’t there.  In fact, in a lot of cases I tell them “Hey, you screwed up, badly, and this might be a marriage ender … but I still think you need to be honest.”  They know.  They knew before reaching out.  It’s always their decision whether or not to open up to their spouse about what their struggling with.  No one has come back and said “my spouse divorced me because I talked to them”, and some of them have had some really difficult things to share.  But I have had a lot of people say that talking to their spouse resulted in a lot of tears, but that it was the best thing they ever did.  So, my advice remains largely the same: open communication is always good.

For the rest who want someone to bounce ideas off of, to be a sounding board, who want to ask “I’m thinking about telling my spouse this, what do you think?” or “I’ve written this letter to my spouse, can you read it?” or anything else, you can always email me at jay@sexwithinmarriage.com.  Sometimes it takes me a few days to answer (especially on those good weeks when I get floods of emails), but I try to answer every email.

<
Fear is holding back your sex life 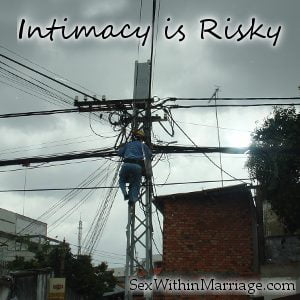