Fear is holding back your sex life

Fear is holding back your sex life

For a lot of us, fear is holding back our sex lives.  I know we don’t like to admit it, but it is.  We usually like to blame it on our busy schedules, on low energy, on a spouse who has a lower sex drive

or a lot of us, fear is holding back our sex lives.  I know we don’t like to admit it, but it is.  We usually like to blame it on our busy schedules, on low energy, on a spouse who has a lower sex drive than us (for higher-drive spouses), or on ourselves for not having high sex drives (for lower-drive spouses).  And usually there’s some truth to those excuses.  But, only in rare cases (though they do exist) is fear not the real underlying cause.

Because as I wrote about last week, intimacy is risky, and physical intimacy is no different.  Many of us feel afraid and so we hold back instead of initiating.

And the funny thing is, both high drive and low drive spouses feel fear, but each typically doesn’t think the other does, or should.

If your a man, then according to our societal programming, a lot of your sexual identity and self worth is tied into being at least sexually competent.  There is this expectation that women (our wives in particular) should be so enthralled by our love-making skills that they just can’t wait to be back in bed with us.  But, the truth is, how good sex is is rarely the issue.  Usually it’s all the other stuff.  Not, sometimes technical skill, or rather a lack thereof, is a hindrance, but again, I think those are the rare occurrences.  Doesn’t mean we can’t learn to improve.  I’m just saying, it’s probably not the factor that’s limiting you the most.  Usually, the desire to have sex by our low-drive spouse has very little to do with our skill and a lot more to do with things like their stress level, their hormones, their beliefs about sex (psychological or theological), how their day was, how the rest of your relationship is, how long it’s been since you had sex, the temperature of the room, whether they got to have a shower today, and on and on it goes.  This is what causes many men to say “we have sex with all the planets align”, because it can feel like a huge mysterious astrological calendar of events that we can’t interpret decides when our wife will feel in the mood or not.  And even though we know there’s a lot of external factors going on, we still feel like if our spouse doesn’t want to have sex…it means they don’t want me.   It means I’m not attractive, either physically, or as a personality, as a husband.

High drive women have a lot of those same fears, but they also have to fight against the stereotype that tells them that men always want sex.  So, if their husband turns them down, they feel like something is desperately wrong with them, because society has taught them that ALL men want sex ALL the time.  Sadly, it seems like a fair number of high-drive women marry low-drive husbands.  I’m not sure why that is, but it seems to be the case.

So, whether you’re a high-drive husband, or a high-drive wife, the fear of rejection is the perhaps the single largest fear that’s stopping us from initiating.  It’s hard to go back again and again, knowing you’re going to be hurt.  As much as many low-drive spouses think their high-drive spouses want sex all the time, the truth is, they’re probably only initiating a fraction of the times they actually want sex.  This means that by the time a high-drive spouse actually initiates, their probably pretty desperate.  Of course, this just makes it worse, because then when you get rejected, it hurts that much worse.

Most low-drive spouses don’t have a clue that this is going on.  They don’t understand what it’s like to have a high drive.  They just think “it’s just sex”, and so they don’t even realize that by the time their spouse can’t stand it any longer and overcomes their fear, that a “no, I’m not interested” feels like emotional abandonment.  Worse actually.  It’s an active rejection, so feels more like emotional abuse.  From their perspective, high-drive spouse should have nothing to fear, after all, it’s just sex.  For many of them (not all), it’s just a want, not a need.  It’s like saying “no, you shouldn’t have a chocolate bar now”.  But, for the high-drive spouse, what they hear is “no, I don’t want to love you right now” at best, at worst “no, you haven’t earned my love yet”.

High drive spouses (myself included) are often surprised to find out that low-drive spouses have fears about sex too.  They’re usually not the same fears though.  Some do have a fear of rejection, especially if they’ve been rejected in the past.  Sometimes high-drive spouses, when they’ve been rejected too long, by the time their spouse wants to have sex, they can’t manage to open up, and so they shut down, rejecting their low drive spouse.  It’s not wise, and it’s self-defeating, but it happens.  It’s hard to let the walls down when you’ve been hurt so often.  By that same token, may low-drive spouses have been hurt emotionally and that makes it hard to open up physically.  They have a fear there too, because they’re afraid that they’ll let themselves be vulnerable, have sex, and then be shut down emotionally again.  In as much as refusing to have sex is a form of abuse, so is refusing to engage emotionally with a spouse you’re having sex with.  And any type of abuse is, of course, going to raise walls.  And contrary to physical walls, emotional walls are far easier to build up than tear down.

For many women (and some men), there are often fears relating to body image.  Despite 96% of husbands in our survey saying that they are as attracted to or more attracted to their wives than when they got married, there is still the devil telling them through media and culture, that they aren’t beautiful enough, that they aren’t sexy.  Sadly, more often than not, wives trust Satan more than husbands.  They don’t know that’s what’s happening, but that’s the underlying truth of it.  Then there the fears about whether they smell good enough, taste good enough, and fears about how their genitals look.  Many women seem to think their genitals are weird, some even say gross.  Most men, on the other hand can’t get enough of them.

Both men and women sometimes have a fear of performance.  Men with ED are afraid they won’t be able to get an erection.  I hear from a lot of wives that their husband won’t even try, because he’s so afraid he won’t be able to perform.  You know what?  The wives don’t care about the ED.  They just want to feel a connection.  They’re willing to try other things.  Or, just to be held naked.  Women worry about performance too.  What if they can’t get their husband to orgasm (if he has delayed ejaculation).  After all, the stereotype is that men orgasm too quickly…so if he can’t, does that mean she’s not sexy enough?  What if the wife can’t orgasm?  Most wives know their husbands love to see them achieve orgasm, so when they can’t, they feel like they let their husband down.

Or, what if you’re afraid that your spouse will want to do that thing again.  You know, that activity you let them do once but you really didn’t like it.  What if they want it again.  Will saying no ruin sex for them?  Will saying yes ruin sex for you?

Of course, the high-drive spouses don’t understand this, because to them, it’s simple: “I want sex all the time, so you have nothing to worry about!”  I said this just last week!  Because for us, our fear is rejection, and for many, there is no situation we can comprehend where we would reject our spouse.  But, the fears aren’t usually based around rejection.  It’s a completely different set of fears.

Get over your fear

In both, these fears can be overcome.  How?  With love.

There is no fear in love. But perfect love drives out fear, because fear has to do with punishment. The one who fears is not made perfect in love. – 1 John 4:18

First, we need to recognize that our spouses love us.  That our fears about them are unfounded.  They don’t think what we think they think.  They don’t feel how we think they feel.  And if we’re unsure, we should ask.  So, let’s work to set aside those fears that have to do with our spouses.  And help our spouses set those fears aside.  One of the most loving things my wife ever did was to promise not to say “no” to me anymore when I initiate.  She’s kept that promise (except a few instances).  No more explicit “no”s.  She’s working on the implicit ones (You know, when you initiate and you see her shoulders slump, so you pull the initiation back, because only an idiot keeps that wall down when you see the punch coming).  She’s also working on working through her set of fears, and I’m doing my best to help address them.

Second, we need to recognize that even if we have fear, that’s not an excuse not to love.  I’ll be honest, I haven’t been initiating for the last … 15 months.  I haven’t stopped completely, but I’ve been holding back a lot.  Why?  Because I’m afraid.  You see, we have a 15 month old.  Who keeps my wife really tired with nightly feedings.  Who likes to wake up while we’re having sex and interrupt us.  Who generally makes my wife far more likely to give those implicit “no”s even before I ask.  But, that’s not the kid’s fault, and it’s not my wife’s fault.  It’s no one’s fault.  It is, however, my responsibility to stay authentic, and I have failed to do that.  Because while I’ve been holding back on initiating, I haven’t master not being hurt by “no”s, be they explicit or implicit.  And you know what…sometimes the implicit “no”s are all in my head.  I think she’s going to say no, and so I don’t initiate.  But, some of those nights…it might have been a yes.  In fact, we’ve had conversations the day later, and it’s more than a “might”.  Then I kick myself for missing out on an opportunity to reconnect.  Not only that, but I feel like a liar, because I haven’t been true to my wife about what I’m feeling.

So, I’m not perfect either, but I’m working on it.  And when I figure it out, I’ll let you know how to do it too. 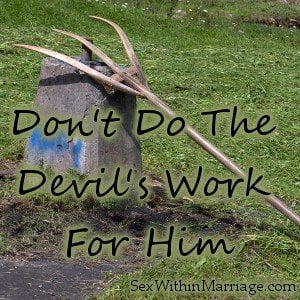 <
Don't do the devil's work for him 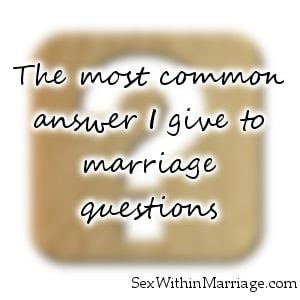 The most common answer I give to marriage questions
>

7 thoughts on “Fear is holding back your sex life”