Don’t do the devil’s work for him

Don’t do the devil’s work for him

There are a lot of the times that we do the devils work for him.  We repeat his lies, we carry his messages, we relay his orders.  I think this happens a lot more than we realize, and I think we need to be more 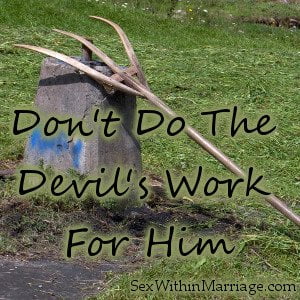 There are a lot of the times that we do the devils work for him.  We repeat his lies, we carry his messages, we relay his orders.  I think this happens a lot more than we realize, and I think we need to be more diligent in calling it out.

Yesterday was a difficult day for us.  Actually, it was only an hour or two.  Christina had a difficult conversation that did not go well with one of our family members around the topic of how we raise our kids.  I don’t want to get into the details, but the long and short of it is, we’re trying to raise our kids in a way we believe is healthy, and that’s offensive to some in our family.

After trying to convince her that this wasn’t true, and being quite frustrated with this family member, I finally pointed to a paper she has taped to our kitchen window in front of the sink and said “read that”.  You see, she had written down some of God’s messages and Satan’s messages at a women’s … thing.   I don’t know what it’s called.  Might have been mothering matters, might have been coffee break, might have been just a bunch of women getting together.  You know the types of things I’m talking about (I can’t keep them separate).

It lists them as:

Well, Christina was not willing to hear any of God’s messages from me at the moment, because she was too busy relaying Satan’s messages:

So, she read them and, still defending Satan’s messages said “I don’t see how this applies.  I’m still a terrible mother.”

My response: “That’s not true, and you’re trusting Satan more than me.  Read it again.”

She did, and it didn’t really help.  I needed backup.  I needed some people doing God’s work instead of Satan’s.  So, I called all the kids in, and as they came in, one by one, from the yard, from upstairs, from the living room, when they entered the kitchen I asked “Why is mommy a good mommy?” and they started giving their answers, the oldest being more articulate than the younger ones.

Our middle child simply looked at me like I was an idiot and said “Because she’s a good mommy.”  Duh.

And our 4 year old just grabbed a step stool, placed it in front of Christina (well, it didn’t go that smoothly, she was fighting against a bunch of other kids in the way), climbed up and gave her a hug.  I had a whole army of kids doing God’s work.  It was fantastic.  And you know what?  It worked.

With enough voices being messengers for God, you can be louder than the messengers of Satan…even when that’s your wife.

And we’re all messengers of one or the other every day.  We too often go through life delivering Satan’s messages or God’s messages without thinking.  We just pick up the mail and off we go to deliver it.  And it needs to stop.  We need to start checking the return addresses.  If it’s from Satan, it needs to go in the trash.  That would free up a lot of our workload in message delivery.  We could probably even manage to give God express delivery service for His messages.

Now, we still have a conflict with this family member that we need to deal with, and it’s going to cause some stress, but we’ll deal with it, now that we know which messages to trust and where the ones we don’t trust belong. 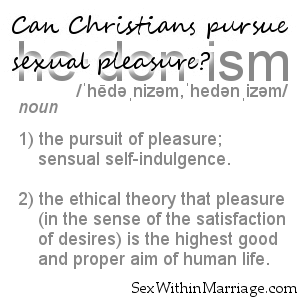 Fear is holding back your sex life
>