Be Authentic about your Sexual Desire

Be Authentic about your Sexual Desire 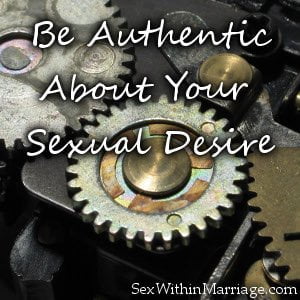 I get a lot of emails from spouses.  I get to read about a lot of marriages in those emails.  I get to read about how spouses react, how they think, their struggles, their concerns, their hopes, their fears.  One of the big struggles I see is in how to be authentic with your spouse.  The specific example I’m thinking of comes up particularly when there is a large difference in sex drives.

A lot of men, and no small number of women, write me saying that they’re going to give up on telling their spouse they want sex.  The topic of sex always causes fights, arguments, strain or stress in the marriage, so they think it’s better just to not share.  Instead, they want to focus on needing sex less.  Sometimes they go so far as to want to ask God to take away their sex drive, but I think that’s unwise.  But, I think there is wisdom in needing sex to keep you content.

Part of the Christian walk is learning to be content with less.  Ideally we should learn to be content at all times and in all circumstances.

We should be striving to lean more on God and less on our spouse for our contentment.  I don’t know about you, but I haven’t achieved that yet.  For some that might mean learning to want sex less, especially if you use sex in order to escape from daily life, or as a means of validation of self.  If you learn to lean on God more, you may find that your desire is not as strong…but it will be more healthy.  Others might find that leaning on God more actually makes them want sex more often, because it will reduce their stress and stress counteracts libido.

But, in the mean time, while we work on leaning on God more, how do we deal with disappointments when it comes to sexual frequency?  Do we pretend that we’ve arrived at that place where we can be content regardless?  I don’t think so.  I think to do that would be to lie to our spouse because we’re being inauthentic.  Rather, I think we need to acknowledge what our current state is, express it in healthy ways, and work on giving our disappointments to God.

In the inevitable times that sex doesn’t happen when you initiate (and if you initiate 100 times a month, it’s bound to happen a lot), then there are your opportunities to learn to give that to God and lean on Him.  In the mean time, it’s okay to feel disappointment.  It’s okay to feel remorse and regret.  And, I think, it’s okay to express that, within reason.

I mean, no one wants to have sex with a whiner.  So, don’t go around the house sulking and sighing all day.  That’s decidedly unsexy.  But, if you’re spouse says “I’m sorry sex didn’t happen today”, then it’s fine to respond with “I’m disappointed too.  Let’s try again tomorrow.”  Now, what’s better is to says something like “That’s okay, rest up, because tomorrow you’re going to need that energy.”, but the trick is that if you’re going to say that, then you really have to be okay with it; you’re also going to have to be okay tomorrow, if sex doesn’t happen again that day either.

My point is: be authentic.  Pretending to be further alone in your walk with God helps no one.  Pretending to be okay with being turned down for sex when you are seething inside, or crying, or depressed over it, is lying to your spouse.  It’s being inauthentic, it’s hiding who you really are, and that’s not okay.  So, be authentic.  Share what’s going on with you.   You know what?  It might actually lead to more sex, because being authentic and vulnerable is sexy…so long as it’s not whiney or sulky.

<
Initiation only counts if your spouse recognizes it

Garbage In - Garbage Out
>

17 thoughts on “Be Authentic about your Sexual Desire”