It’s been about a month since our last Anonymous Questions posting, so I thought I’d catch up, as I have a couple of questions that I haven’t yet answered.  For those who are new to the site, these questions are all gathered from our anonymous

It’s been about a month since our last Anonymous Questions posting, so I thought I’d catch up, as I have a couple of questions that I haven’t yet answered.  For those who are new to the site, these questions are all gathered from our anonymous Have A Question page.  If you have a question that you’d like answered, but don’t feel comfortable emailing or messaging us, you can visit the page and ask it there.  We have no way to trace it back to you, so your identity is safe. It also means we can’t ask any follow-up questions, so bear with us as we try to answer with the little context we have, if any.

That said, let’s get on with the questions.

What do you think of the self proclaimed Christian website “[redacted]“?

We have this idea in Christianity that so long as we slap a Christian sticker on it, it’s suddenly okay.  There are Christian bands whose lyrics, attitudes and lifestyle are no different than secular music, but because the band members are Christian, it’s considered Christian music.

I’m not saying all Christian alternative music is bad (I quite like a lot of it, and find some of it quite inspiring and worshipful), but it’s not the label of “Christian” that makes it so.  It’s the attitude and the lyrics. In order for something to be worship, it needs to “give God worth”. To lift Him up. I’d argue much of “Christian rock” music does not do that. Arguably contemporary worship music sung in Churches doesn’t do a good job of this either (there’s a lot of bad theology in a lot of songs, which just slips by people).  Point is, not everything we’ve adopted as Christian is bad, but that the label “Christian” doesn’t automatically make it good.

I understand the appeal.  In fact I’ve fallen for it in the past, years ago.  For a low-drive, Christian spouse, graphic pornography is clearly wrong, but it’s easy to rationalize written pornography as simply reading a story that turns you on and makes it easier to switch gears and become sexually engaged with your spouse.  I’ve made the same mistake of encouraging my spouse to read stories like that.

If you really want to use stories to boost arousal, write them yourself or ask your spouse to write them for you.

Thank you for such an informative blog Jay!

I have a dilemma. My husband is low drive, and I’m high drive. When we have sex it can be really good, however my husband is disinterested and really wants to get it over and done with as quickly as possible. I want to give myself over to him completely in a sexually submissive sense but I’m concerned that he won’t 1) appreciate it or 2) take care of me. As it stands right now, our regular encounters involve very minimal foreplay or kissing, sometimes going as far as entering me before I’m prepared for him. It’s like he has better things to do then be intimate with me. Thoughts?

There’s a few things on here:

They’re all related, but let’s tackle them separately for now.

Sex drive differences are always difficult to deal with.  There could be many reasons as sex drives typically aren’t as simple as just being “high” or “low”.  Our brains react to sexual excitors and inhibitors. More information on that here.  In short, if someone is “low drive” it means they’re more sensitive to sexual inhibitors, or are experiencing more of them than excitors.

This is why people often complain that their spouse seemed to have a high sex drive while dating, but then became low later on.  As you add stress, responsibility, tiredness, being in “parent-mode” and a host of others things, the context changes, and they experience more inhibitors more strongly.

The “higher-drive” spouses can sometimes have the same inhibitors, but aren’t as sensitive to them.  For example, for my wife, being tired severely depletes her desire to have sex. For me, exhaustion doesn’t really make a dent in it.  Even if I’m so tired I could fall asleep during sex, I still want it.

For many low-drive spouses, if you can remove the inhibitors, they’re sex drive suddenly reappears.  This is one reason why hotel-sex is a thing. No kids, no responsibilities, no schedule, no cooking or cleaning, and suddenly they’re ready for anything.  Others need a bit more of a shift in order to wake up that part of themselves again. Many find their drive wakes up with retirement, or becoming empty-nesters.

Now, these inhibitors could be stress and everyday life context type things, or they could be medical in nature.  As well, things like low testosterone can lower the sensitivity to excitors. So, you may want to check with a doctor for those things.

These can ultimately contribute to the issue of not enough foreplay.  Or it could just be plain selfishness. I’m sort of leaning to the latter in this case based on multiple indicators stacking up.

That said, some men simply don’t know how much foreplay is needed, and some women simply aren’t good at communicating when they are or are not ready.  So, I can’t rule that out. The first step is always communication. And that communication might have to happen several times. I know it usually takes a few times for my wife to get things through to me.

On to the topic of submission.  I don’t know if it will work if you submit to him completely or not.  It depends on two things: your mindset and his.

Many men are turned on by submission, so that could help increase his drive.  That said, he could also take advantage of it. Depending on your mindset, you might enjoy his having more control and simply find contentment in his leading.  Or it might frustrate you. And there’s a chance it could become abusive, which is always a concern if he is the selfish type who doesn’t listen. So, be sure you have some healthy boundaries that you’re willing to exercise.

I’m not sure that’s always the case, but I think there is some truth there.  Trying to be submissive as a technique probably won’t work. But changing your character to be more submissive might give him room to grow into the man you want.  Just make sure you don’t become a doormat.

That’s it for this week’s questions.  If you have a question of your own, or a topic you’re having trouble finding information on, check out our Have A Question page to ask it anonymously, or just email me at jay@uncoveringintimacy.com.  Also, we have a survey running at the moment about post-sex dynamics and routines, so be sure to fill it out if you haven’t already.

<
Are you sabotaging your sex life like I do? 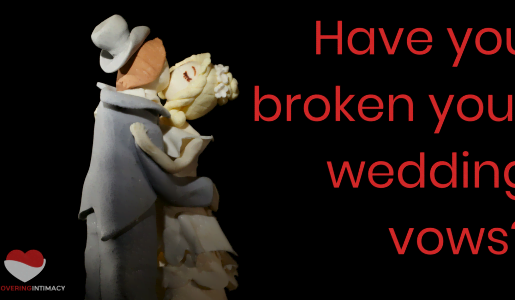 Have you've broken your wedding vows?
>