The dishes can wait – How to make sex a priority

The dishes can wait – How to make sex a priority

Do you ever find that you have so much to do in the evening, dishes, laundry, catching up on TV shows, etc., that by the time you get to bed, you’re too tired to have sex?  With 5 kids to clean up after, we definitely

Do you ever find that you have so much to do in the evening, dishes, laundry, catching up on TV shows, etc., that by the time you get to bed, you’re too tired to have sex?  With 5 kids to clean up after, we definitely feel that way sometimes.  The good news is, there’s an easy way to solve that problem tonight!

But, we all want our spouse to be energetic in bed, right?  No one wants to have sex with a spouse who is saying “Well, alright, but can we make it quick?  I’m tired”.  You want your spouse to be present and enjoying it, not checking the clock every 5 minutes to see how much or how little sleep they’re going to get.

So, why do we wait to make sex the last thing on the schedule for the night?  Why do we wait until we’re utterly exhausted before we finally start initiating sex?

You don’t have to be a sex ninja

Christians are the best sex ninjas (trademark pending).  Don’t know what a sex ninja is?  Sex ninjas at categorized by having sex:

Funny as that might be (I know some of you are chuckling), Christians still tend to have the idea that sex is still somehow wrong, sinful, dirty, or at the very least something to be ashamed or embarrassed about.  I think, as a result, we get pre-programmed to think that sex should only happen at night.

While I hope you have challenged this notion of sex being something that needs to be kept a dark secret and unacknowledged, that doesn’t necessarily mean you’ve ever thought about how that applies to when “sex time” is.

Do you have sex late at night because it’s somehow “inappropriate” to have earlier?  Maybe it’s time to challenge that thought.

You don’t have to fall asleep after sex

I know, I’m mostly talking to the husbands here, but there are some women who get pretty sleepy after sex as well.

There’s nothing better than slipping into a post-orgasm coma after an enthusiastic round of sex.  I get that.  But, if it’s at the expense of having really good sex, is it really worth it?

I mean, if the choice is to have great sex while you still have lots of energy, or mediocre sex because you’re already exhausted and then be able to fall asleep immediately afterward, which would you choose?  I’m going for the former myself.

So, have sex earlier and then, if need be, take a shower to wake yourself up a bit so you can do all the things you would have done before sex.

As an adult, going to bed early isn’t a punishment

I don’t know about your household, but at mine, bedtime always seems to come as a surprise to my kids.  Like they don’t have one every single day.  Wrangling 5 kids into bed (usually in 2-3 shifts due to age differences) is a chore and a half.

Wrangling my wife into bed afterward can also be one.  Often I’m met with the same objections as the kids:

I think as adults, we sometimes have the idea that going to bed early is still a punishment for something.  We don’t want to go to bed early, because, well, we’re adults now!  We don’t have to.

Go to bed while you still have some testosterone left

I wanted to share one more thing with you.  Besides having enough energy for sex, another depleting resource in our bodies is testosterone.  Testosterone is depleted during the day and recharges at night while you sleep.  This is one reason why a lot of guys wake up with erections in the morning.  Their bodies are ready to go!

But it’s not just men, women have more testosterone in the morning as well which depletes during the day.

Testosterone is important for many things, but one of them is helping with desiring sex, having the ambition to initiate sex and then aids in producing erections and lubrication.  In short: more testosterone means better sex.

Don’t wait until your testosterone tank is running on fumes before trying to have sex at night.  If you’re struggling with low desire, erectile dysfunction, or finding it hard to initiate, it might be because you’re waiting until too late in the day to think about sex.

I know for me, first thing in the morning, it’s pretty tempting to wake my wife up for some fun before heading off to work.  Some days it’s really hard to fight that temptation, even though I know she really needs her sleep at this stage of life.  All through the day, I can’t wait to get home and jump her, but can’t because of kids, dinner, evening commitments, etc..  If we’re up late, by the time we go to bed, I still really want to have sex, but to be honest, I’ve lost all the ambition needed to initiate it. By then, I just want her to.  Of course, by then she’s also lost most of her interest, which was already lower than mine.

I can actually feel my testosterone depleting and changing how my mind prioritizes things. I feel myself getting lazier as the day goes on, even with regard to sex, which is a fairly high priority in my brain.  This is one reason why our day of sex experiment worked so well, I think.

Have better sex by starting earlier

So, how are you going to change your habits based on this information?  Could you choose one or two nights a week where you decide to have sex earlier in the evening?  Maybe you could have your fun before finishing your chores.

After all, you’re an adult, it doesn’t always have to be work before play.  Try it out and see if it improves your sex life.

Or just skip the chores one night.  It might be worth it… 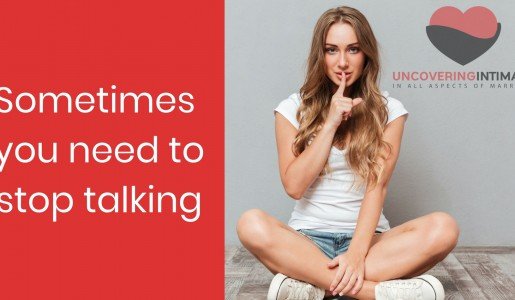 <
Sometimes you need to stop talking 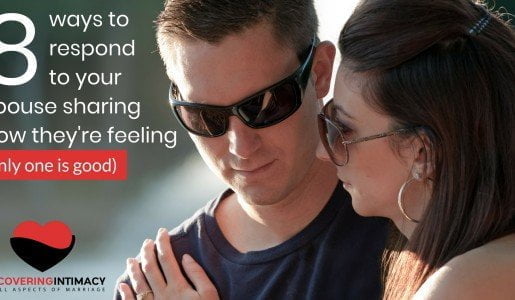