Sometimes you need to stop talking

Sometimes you need to stop talking

I’m always going to be in favor of communication, but there are times when you need to stop talking and just start actually doing something, even in marriage where communication is a vital skill.  Today we’re going to look at some of these things. 1. 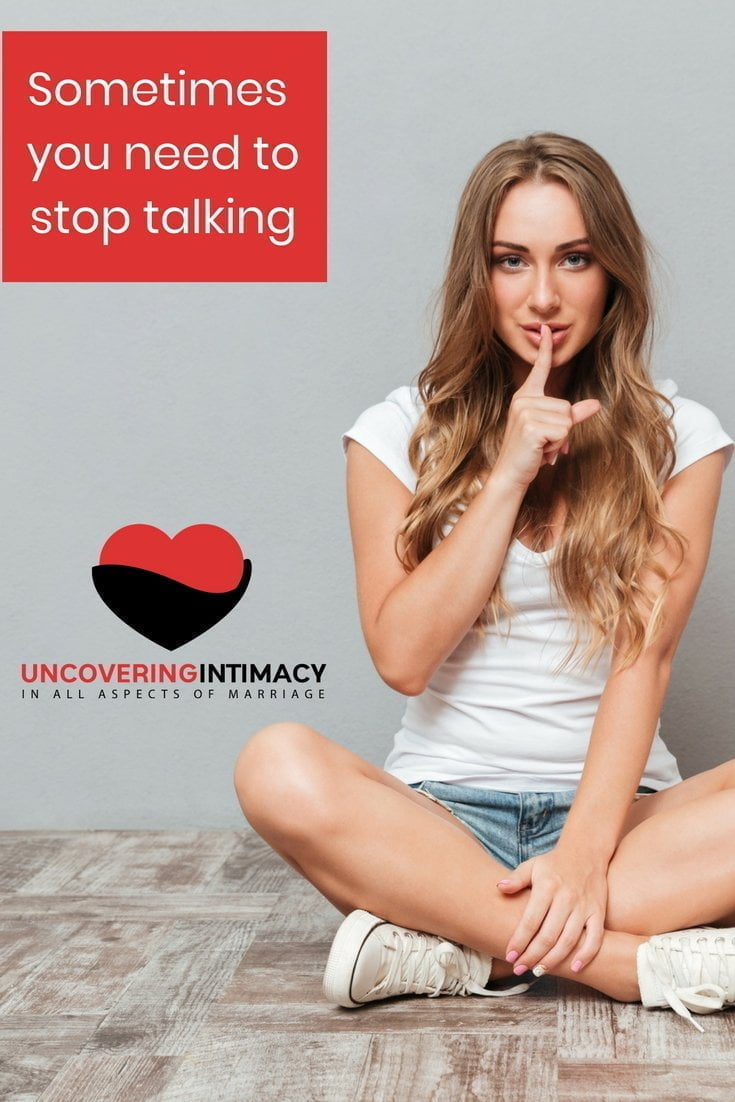 I’m always going to be in favor of communication, but there are times when you need to stop talking and just start actually doing something, even in marriage where communication is a vital skill.  Today we’re going to look at some of these things.

We live near the Bruce Trail here in Canada.  It’s an 885 km (550 mile) trail that runs through towns and rural areas from Niagara Falls all the way up to Tobermorey near Georgian Bay.  Growing up, my dad always talked about taking my brother and I hiking for a week.  Backpacking our way through the trails to see how far we could get in 7 days. We’d take all our gear with us and just head out.

We never did it.  My dad is now 70 years old, and while he’s the fittest he’s ever been (he’s an avid biker), he can’t walk well anymore, and certainly not for long distances.  While thinking about this post, I realized it’s never going to happen.  We kept talking about it, but never actually got up and did it.

My wife and I keep hoping to “someday” have another honeymoon. Our first one was an absolute disaster.  On our wedding day, she got her period and I got the flu. People thought I was nervous because I was sweating while saying our vows, but I actually had a fever.  We didn’t even have sex our first night.  Then, on our trip up north to a couple’s resort, our minivan broke down in the middle of a protected parkland over 100km from any house, business, or phone.  This was before the ubiquitousness of cell phones.  Thankfully a nice family saw our distress and drove us into town.

I don’t remember much of the next few days as I was still sick, but I do know it rained a lot and I had a fairly unhappy bride.

So, our honeymoon was sort of a bust.  For the last decade or so, we’ve been saying we should redo it.  I think it’s time to stop talking about it, and start planning it. We’re finally out of a decade of pregnancies and breastfeeding so it might actually be possible.  The next steps won’t be solved by waiting, but by planning, setting aside money and finding people who will take care of our army of children for a week or so.

The best time to plant a tree is 20 years ago.  The second best time is now.

Too many of us start seriously planning for retirement too late.  We started planning financially a while ago now, but I really wish we had started seriously doing it much earlier.  My wife and I are only in our mid-30’s, but retirement savings growth is a slow and steady progression.  We can’t expect large windfalls of unexpected income, especially with 5 kids.  More often, we need to plan for large unexpected expenses that won’t erode our long-term savings.

For myself, I plan to retire into ministry.  So, I need to start thinking about what I need to do today to meet that eventuality.  That means I need to be improving my relationship with God, today, and every day. It means I need to start getting practice in ministry (like this blog).  I also want to be in better health, which at the moment, the most pressing health issue is my weight, which I’ve managed to bring down about 50 lbs in the last 10 months.  Another 50 (ish) to go!

The point is, I have plans for the future.  Who I want to be, how we want to live, what we want to be doing.  But those plans aren’t things I can just suddenly decide “okay, today is the day”.  They will take decades of preparation.  It’s really a monumental task.  The project of most of a lifetime.  Yes, it needs to be discussed, but at some point, you need to start doing.

I get so many emails and talk to so many spouses who are not happy with the status of their marriage.  Usually, in those cases, their spouse isn’t happy either.  And a lot of them are talking about how unhappy they are.  They talk to each other about it, or talk to others.  Unfortunately, many of them never do anything about it.  They just keep talking about how unhappy they are, and how things have to change.

Talking isn’t going to get you far for long.  You have to do something.  Now, that doing probably is going to involve some talking, too, but it’s talking with a purpose, not just talking to complain.  There’s a big difference.

If you’re tired of talking about how unhappy you are in your marriage, please, do something about it.  Don’t assume talking is going to solve the issue.  Get some help.  I love talking to couples who say things like “Our issues aren’t huge now, but we want to get ahead of them before they become big.”  It shows they’re being proactive, that they care about their marriage and each other.  That they aren’t going to just wait for things to blow up before they address them.  They’re my favourite kind of coaching client because they still have joy in their marriage.

My second favourite is the kinds who are starting to have serious issues but are committed to making it work.  Helping them pull themselves out of a difficult dynamic is an amazing experience. I love seeing marriages “reborn” in this way.

If you’re having problems in your marriage, don’t wait.  Get help sooner rather than later.

Some couples struggle to talk about sex at all.  If that’s your marriage, then this paragraph is not for you.  Other couples talk about sex a lot and then never do anything about it.  Sort of like the point above.  We did this for years.  Every time we’d have sex, we’d both end up saying “We should do this more often,” but then invariably it would be weeks or months again before we had sex.

And sometimes the reasons are serious struggles.  Depression, kids who won’t sleep, sickness, lack of desire, problems in the rest of the marriage, opposite shifts, and others are all difficult hurdles to get over sometimes.  But they are also all struggles you can get over with some planning and intention.

At some point, you have to stop saying “We should do this more often” and actually make a plan that you will execute.

Yes, it’s possible you’ll get rejected, and that will suck, but the risk of letting it wait longer I think is more painful in the long run.  It just doesn’t seem that bad, because it’s spread out over more time.

Now, if you’re reading this in bed beside your spouse, then you’re already halfway there. Stop reading this and just get busy.  Seriously.  Go.  Now.  The post will still be here when you’re done.  I promise.

Stop talking and do something about it

My point is, while communication is an amazing, important, and even critical thing to a marriage that you should not neglect, it needs to be balanced with action.  If all you’re doing is talking, but not actually implementing any actions to make any changes, then all that talking is going to waste. Talking about a brighter future isn’t going to make it any brighter by itself.

So, what’s your next step?  What have you been talking about that you need to act on?  What’s one thing you could do today to move your marriage closer to a goal?

<
Why is initiating sex so difficult?

The dishes can wait - How to make sex a priority
>

5 thoughts on “Sometimes you need to stop talking”