A day of sex

A day of sex

We tried something recently that I thought I’d share, because it might interest some of you.  Warning: If you’re currently in a marriage where your spouse is actively gate-keeping or refusing sex, don’t read this.  It will just irritate you. I was listening to some 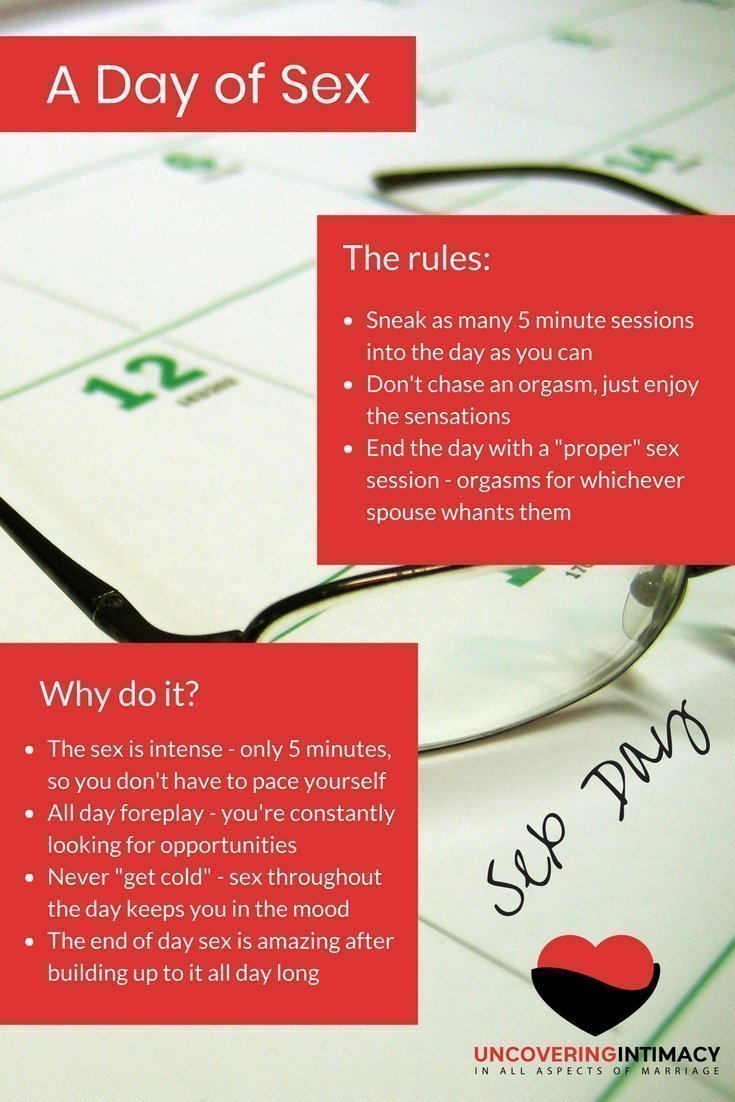 We tried something recently that I thought I’d share, because it might interest some of you.  Warning: If you’re currently in a marriage where your spouse is actively gate-keeping or refusing sex, don’t read this.  It will just irritate you.

I was listening to some podcast, or reading a blog, honestly, I don’t remember which, and someone mentioned a vacation where all they did basically was have sex.  They would get up in the morning, have sex, get some breakfast, have sex, re-hydrate, have sex, get a snack, have sex, have some lunch, have sex, … well, you get the picture.  And I thought “Well, that’s nice if you can manage to have a vacation without the kids and no plans.”  But with 5 kids, and no-one willing to take them overnight, that’s pretty much an impossibility for us.  We don’t really even get date nights let alone weekends away.

The second thing I thought was “I don’t think my refractory period would allow for that.”  I mean, I don’t know about you, but as a guy no longer in my teens, half-a-dozen orgasms in a day don’t sound doable.  Sounds like fun, but not realistic.

But, then I thought about a post I wrote a while back What Is Your Goal? in which I suggested that sometimes orgasm doesn’t need to be the goal of sex.  I mean, sometimes you just really want an orgasm, and I think that’s perfectly okay to ask your spouse to help you with that.  But, a lot of the time, what we really want is to reconnect, or just to enjoy some pleasure together.

So, I proposed the idea to my wife, who asked some good questions for clarification, and here is the plan we came up with. Basically, short 5-minute quickies throughout the day, without the intent of achieving orgasm.  If it happens, no problem, but don’t chase it.  Then, at the end of the day, we’d have a “proper” sex session wherein we’d both get an orgasm if we wanted it.  Now, if your spouse needs more time to “warm up”, this may not work for you.

I was honestly a bit surprised (and elated) that my wife agreed without really any push-back.  I’m still constantly in awe at how much she’s changed over the years.  She’s amazing.

How it actually worked out

This was a Friday night, and we planned to try this out on Saturday since the only plans we had was going to church.  We figured a quick session when we woke up.  Another after we got home from church and got the kid’s lunch, and then our final one at night.  Since it was late, we also decided just to have one of those “no orgasm” quickies at night before going to sleep.

Then we had a kid wake up at 4 am who just didn’t want to go to sleep.  Most accurately, he didn’t want me to help him go to sleep, but I was trying to save my wife from having to wake up.  But, after 20 minutes of him screaming that he didn’t want me, she was up anyways.  Finally, he went to sleep again, and we figured, well, we’ll up anyways … so we sneaked (yes, that’s the right word) another one in.

The rest of the day basically went as planned.  We had some kids crawl into bed with us before we woke up, but we managed to shoo them downstairs to get breakfast while we “got dressed”.  We did break the rules at bit after lunch where we chased an orgasm for my wife for a bit.  But, no one had any complaints.

So, why try this? 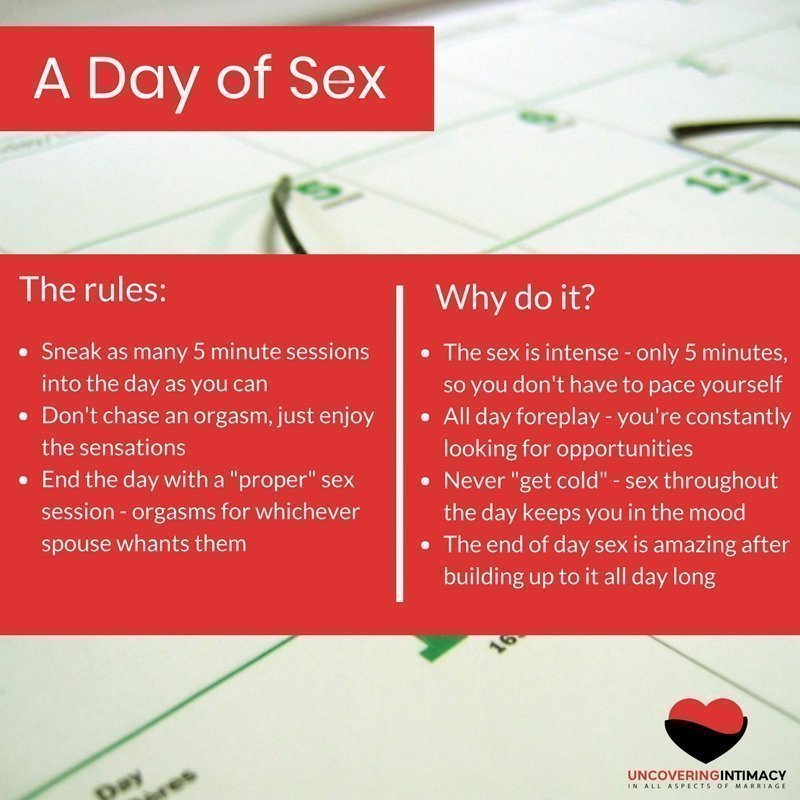 Well, first off, it’s a lot of fun.  For me, it was one of the best days of my life. It was exactly what I want for a weekend.  For me, sex is time to reconnect, have fun, and relax with my spouse, and I like to have a lot of it over the weekend to help relax from the workweek and prepare for the next to come.

Also, trying to sneak away, and get our “session” in without any of the kids wondering where we’d gone was fun.  I’d finally bought a lock for the bedroom door a couple of weeks ago, so we weren’t afraid of being caught or anything, but a knock on the door can be a bit of a mood killer.  So, being inconspicuous works best.

As well, short intense sex sessions is … well, just exhilarating.  If you know that orgasm isn’t the goal and that you only have to worry about sex for 5 minutes, well, you don’t have to hold back or pace yourself.  You can invest all your energy into it.  It like a series of sprints throughout the day.

And, you never really get “out” of the mood.  You know sex is going to be happening all day, so you’re always sort of “ready” to go.  It’s an exciting frame of mind to be in, and also helps cut down, or eliminate the foreplay you need, which is good, because you only have 5 minutes.

Lastly, sex at the end is pretty awesome, because you’ve been building up to it all day.

So, that’s how we managed “a day of sex” with a house full of kids.  It’s a lot of fun, doesn’t take a lot of time.  My wife was concerned that it would be frustrating to keep having sex without orgasm, but it wasn’t at all.  Plus, she got an extra one during the day, so no complaints from her.  Actually, she’s suggested doing it a couple of times since then, but unfortunately, they haven’t panned out yet.

If you’re looking for something fun to try to inject some excitement into your married sex life, that’s something you can try.

<
Why it's important to talk about sex 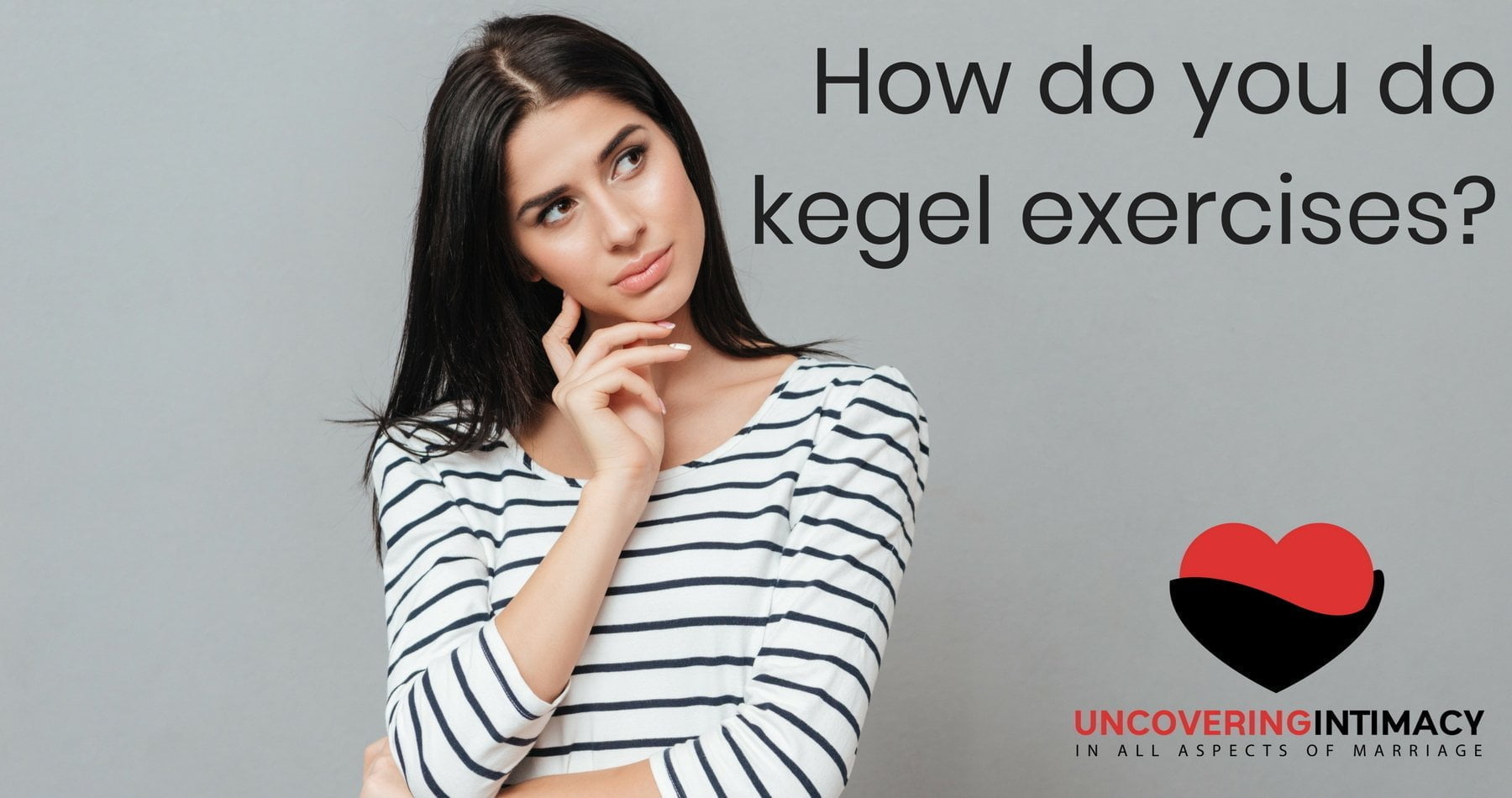 How do you do kegel exercises?
>