Stop telling men to be self-sacrificing

Stop telling men to be self-sacrificing

I’m getting sick and tired of hearing references to Ephesians 5:25.  It seems every time I turn around, some other person, be it a man or a woman, is quoting it.  In case you don’t know it off the top of your head.  Here’s the 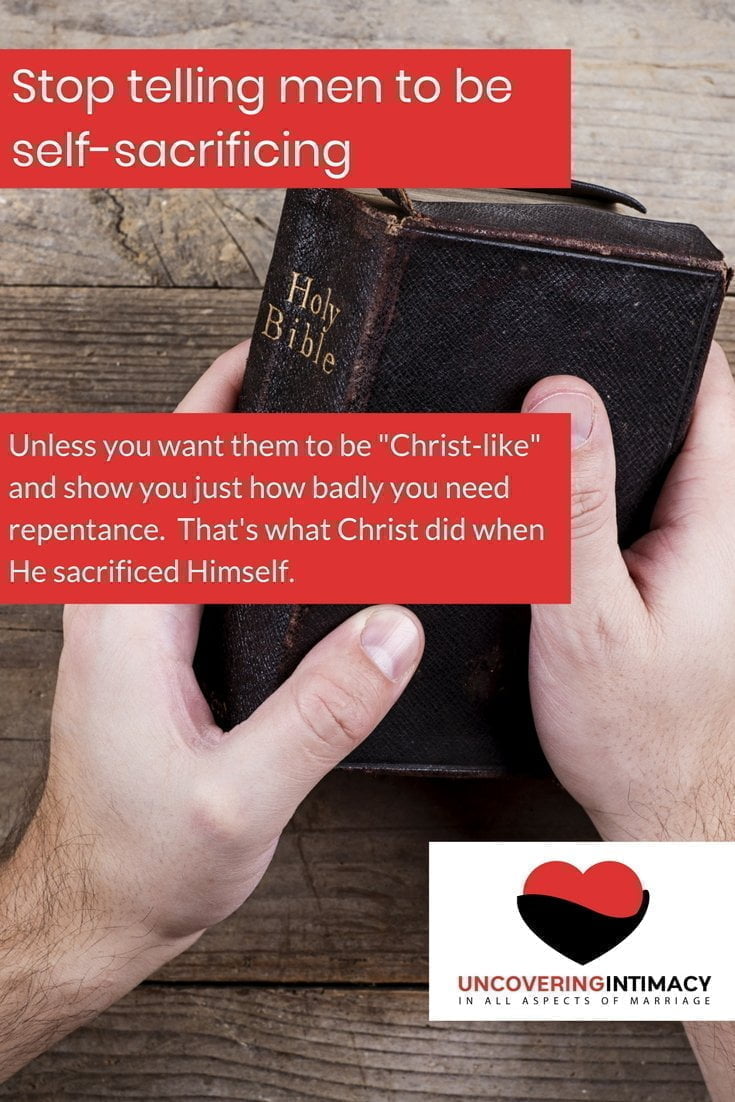 I’m getting sick and tired of hearing references to Ephesians 5:25.  It seems every time I turn around, some other person, be it a man or a woman, is quoting it.  In case you don’t know it off the top of your head.  Here’s the verse:

Husbands, love your wives, just as Christ loved the church and gave himself up for her – Ephesians 5:25


Now, don’t get me wrong, it’s a great verse, just like all the other verses in the Bible.  I have nothing against it.  What I have an issue with is the cherry picking of this verse in complete absence of the rest of the Bible.  Many men have been hit over the head with the “self-sacrifice” idea so hard that they’re basically useless as men.  They don’t know how to do anything except lie down and die any more.  They couldn’t lead their families if their life depended on it.  After all, the only value their life has is to die for their wife.

So, should we ignore this verse?  Of course not.  Like I said, it’s a great verse, but let’s not teach it to the exception of all the others.

1. Men have a purpose other than to die

Then the Lord God took the man and put him in the garden of Eden to tend and keep it – Genesis 2:15

We were created for a purpose: To protect the Earth.  I’ve been told that the Hebrew word used for “tend and keep” comes with the imagery of a fence around something valuable.  We weren’t created as gardeners, but as guardians.

Now, granted, Adam failed, but truth be told, many of us are continuing to fail at this in our marriages, in our workplaces and in our churches.  Yes, Eve was deceived and ate the apple, but Adam knew better.  He wasn’t deceived.  He made a choice of “happy wife, happy life”.  Instead of rebuking Eve, going to God, accepting responsibility (as she was his responsibility) and asking for forgiveness, instead he decide to accept the leadership of his wife into ruin, then hide.

How many men are doing this in their families today?

It was, and continues to be, our job to guard God’s creation.  Be that the Earth, the people, or God’s Truths as absolute principles.  And frankly, we, almost as an entire gender, myself included, have dropped that calling.  Why?  Because we aren’t being taught to guard His work or His truth.  We aren’t even taught how to really love people.  Instead, we’re being taught to lie down and die.  Not for any cause, just because.

The truth is, there are two reasons people want us not to live up to this calling:

2. Christ did more than “just die”

He spent a lot of time teaching, preaching, holding people accountable, changing the world and standing up for injustice.  We tend to think of Jesus only as His 3+ year stint as an itinerant preacher who ended his career on a cross, but Jesus was working in the world well before that.

Jesus was there are creation, implementing God the Father’s orders.  Jesus was the pillar cloud and fire leading the Israelites, separating them from the Egyptians and ultimately destroying those that tried to kill them at the Red Sea.

And we know that when Jesus returns, yes, He will be the slaughtered lamb, but He will also come to ask difficult questions, hold people accountable, judge and ultimately destroy those who don’t worship the Creator and His commandments.

Yes, Jesus died, but it was for a purpose.  He died because we had, and continue, to destroy the world and ourselves.  He died to show us what we were doing.  He didn’t just die because it was the easy thing to do.  He died to open our eyes to the fact that we needed grace.

Now, what husbands these days are self-sacrificing in order to show their family just how much they need grace?  You see, we tend to read Ephesians 5:25 and forget about the rest of the sentence.  That verse is only the first part of it.

Husbands, love your wives, just as Christ loved the church and gave himself up for her to make her holy, cleansing her by the washing with water through the word, and to present her to himself as a radiant church, without stain or wrinkle or any other blemish, but holy and blameless. – Ephesians 5:25-27

So, if your sacrifice doesn’t ultimately lead to them being made holy, cleansing them by holding them accountable to the word so that you can present them as blameless, well then I’d argue you aren’t “giving yourself up like Christ did”.  In fact, you’re taking the cowards way out by just lying down and dying.  Because it’s easier than actually holding up a mirror to your spouse and saying “do you realize what you are doing to yourself” and then saying “I will take the punishment for this because I love you, but make no mistake, you sowed this destruction that I am paying for.  Now go and sin no more.”

Where’s is the sermon to teach men how to do that?  Where are the classes to tell women what they’re asking when they want their husbands to be self-sacrificing?

What this “self-sacrificing” has wrought 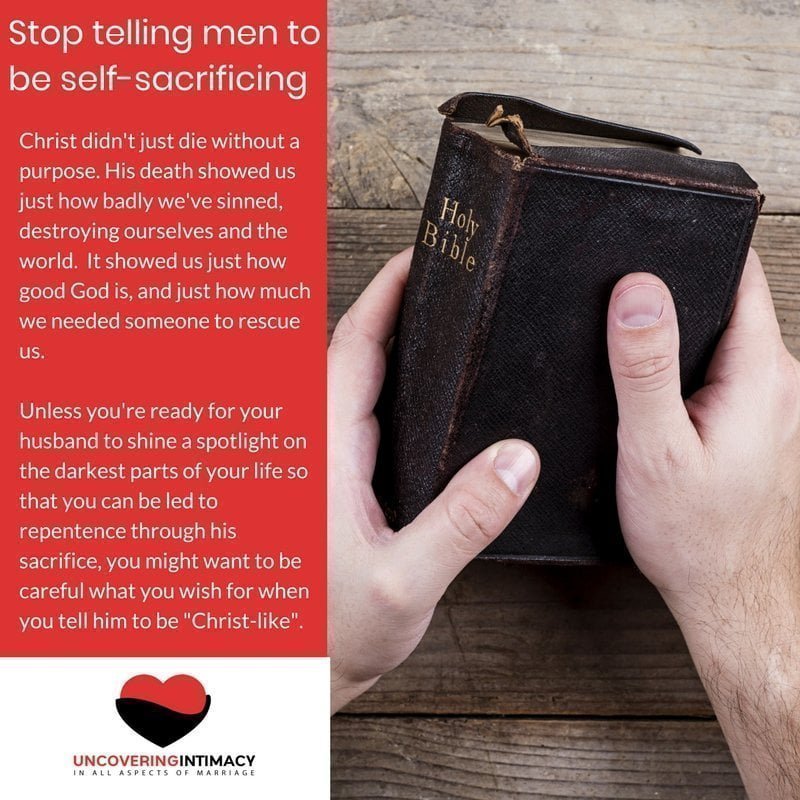 And then we wonder why men have no confidence.  Why they have no power in their homes or in the world.  Why marriages are falling apart, why wives have no respect for their husbands, and why husbands live in fear of their wives, and why everyone is miserable with the entire state of affairs.  It’s because we’re telling men that their job, and the best they can do is just to die.  Not for any reason, purpose or outcome.  Just because it’s the “Christ-like thing to do”.  Well, I call that into question.  That’s not the Christ I read about.  He was driven, He had a purpose, and it didn’t just roll over and die like a coward.  He did it to show the world just how bad it was and just how good He was.

Not in a “look at me, I’m self-sacrificing” sort of way either, which is what a lot of Christian men end up doing.  They’re not self-sacrificing because it’s the loving thing to do, they’re doing it so they can play the martyr card, so they can look good in the church, or so they don’t have to fight real problems in their life.  In reality we have a generation of “good Christian men” who are not really good and barely Christian.  They spend each and every day wondering if they’re really a man, trying to prove to themselves they are, and worrying that everyone else will figure out they’re not.  They hide everything about them behind a facade of Christian niceness that is neither nice, nor loving, but based on fear.  In short, we have men who have sacrificed themselves for nothing, but we asked them to, and there’s nothing left for them to give, because they didn’t die for a purpose.  They just died because it was expected of them.

So, stop telling men to be self-sacrificing.  Unless you’re willing to actually teach them what that means.  To be honest, I’m not exactly sure what it means, but I feel like I have an idea and something to build on.  If your a man and want to join me and try to figure it out together, I started a closed Facebook group that you’re welcome to join.  Sorry, women, this needs to be a space for us.  Because I think men need to figure out how to be men together.  There’s been enough of women trying to tell men how to be men for my liking. 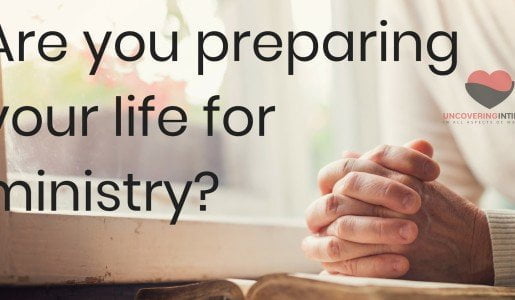 <
Are you preparing your life for ministry?

What can you do if your wife is too ticklish for oral sex?
>

40 thoughts on “Stop telling men to be self-sacrificing”