Why does sex hurt?

Why does sex hurt?

I got this question last night: On my wedding night I lost my virginity to my husband. I went on my honeymoon the following week and my husband attempted to have sex once and it lasted like a couple mins because it hurt me .

I got this question last night:

The actual problem?  I think the actual problem is that you didn’t communicate enough.  I may be wrong, I mean, I’m guessing based on a paragraph, but typically I find couples who have problems like these, the real issue is a lack of communication.  You didn’t mention anything about discussing how to make it better, talking about options, talking to a doctor, nothing.  So, that’s what I think the “actual” problem is.

However, I have a feeling what you’re wanting to ask is why does sex hurt.  And that can be from a number of reasons.

Along with lubrication, it’s also good to be relaxed.  Of course, first time sex can be a difficult time to relax.  So, next time you try (assuming there is a next time), maybe ask for a massage first.  Use coconut oil, and have him massage EVERYWHERE.  That might help with both the relaxation and the lubrication.

Note: There’s no hard evidence that I’ve seen about whether coconut oil will degrade condoms or won’t, so be aware of that if you are using condoms.

Often both of these (lack of lubrication and inability to relax) are caused by going too fast.  Take it slow.  Start with a massage, like I said, move on to foreplay, then sex.  If you just jump to sex, many wives will not be happy campers.  Firstly, because it’s going to hurt, but also because women tend to take longer to orgasm, so just jumping into sex is a recipe for a huge orgasm gap.

And of course, there’s always the outside chance of needing medical intervention.  Sometimes there is scar tissue that causes pain, because scar tissue doesn’t stretch like ordinary tissue.  Also, sometimes women have a hymen that’s stronger than “normal”, and needs to be cut by a doctor.  There’s also conditions like vaginismus, which I’m afraid I know very little about, that cause a lot of pain during sex.  All of these need to be discussed with a qualified medical doctor.

You said you left him.  But, I’m not sure if you mean separation, or divorce.  In either case, if you want a successful marriage, you’re going to learn to communicate more and more effectively.  Talk about sex, talk about how it’s bothering you, talk about solutions and options, and talk to a doctor if necessary.  In short: start talking. 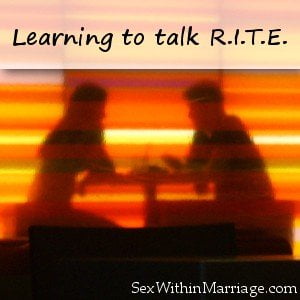 Survey on prayer and sex
>