Why am I always the one who has to initiate sex?

Why am I always the one who has to initiate sex?

This past week, we were having a discussion in our Uncovering Intimacy Champions group.  I won’t post the full start of the conversation because I haven’t asked if I could, but the gist of it was this:  How do you keep initiating sex when your spouse,

This past week, we were having a discussion in our Uncovering Intimacy Champions group.  I won’t post the full start of the conversation because I haven’t asked if I could, but the gist of it was this:  How do you keep initiating sex when your spouse, while receptive, never initiates back?  How do you fight the discouragement when you feel that they don’t love to be with you as much as you want to be with them?

Many higher-drive spouses feel this way.  When they initiate, even successfully, if they’re always the one initiating, then they feel discouraged.  I have three things to say to this.  The first two are directed to the spouse who is usually initiating.  The last is for their husband or wife.

1. Be happy with what you got

Firstly, we need to be content with what we have in these situations.  If you are initiating regularly and your spouse is receptive to that initiation, you should count your blessings.  You desired something, and you got it.

Some of us have even come from marriages where initiation didn’t lead to reception but instead let to rejection.  We should be over the moon that the dynamic has changed.  And some are.  It’s not always perceived that way, as I discussed in my last post.

However, what sometimes happens is that the new “normal” becomes intolerable.  This isn’t a good frame of mind.  It’s like deciding you need to lose 20lbs, so you start exercising more.  You put in the work, lose the weight, and then are unhappy that you aren’t even fitter.  You should be happy with the progress, while still being hopeful and dedicated to making it even better.

Unfortunately, many of us are perfectionists, and when it’s not perfect, then it’s not good enough.  We become dissatisfied with the new reality rather than counting our blessings and hoping for even more.

2. Don’t judge your spouse’s feelings based on your behaviours

Too often, we have bad “theory of mind”.  Theory of mind is what we call the ability to recognize that other people have different perspectives, different beliefs.  Here’s a great video that explains it:

No, as we grow up, we learn that what we know isn’t what other people know.  However, when it comes to feelings and behaviours, we sometimes get a bit hung up still.  We believe that the way we feel about something is the way that other people feel.  The behaviours we have should be the behaviours others have.

Of course, we don’t consciously think this, but it comes out so often in daily life that it’s obvious that this is what’s going on in most human, adult, minds below the surface.

So, with our spouses that feel that our spouse should initiate, they are portraying their own view of love, desire, arousal, and the behaviours that are associated with those things into their husband or wife.  I’ve done it too, so you’re not alone if this is you.

If we want sex, we initiate.  So, we assume that if our spouse doesn’t initiate, then they don’t want to have sex with us.

And remember, it’s not that they aren’t willing to have sex in these cases.  That does become a serious problem in the long term.  It’s just that they aren’t showing desire in the same way you are.  In many cases, they just aren’t built that way.  If they have more of a responsive arousal pattern than a spontaneous one, then expecting them to act as if they are driven by spontaneous arousal is ludicrous.  It’s like complaining that your pet doesn’t love you because it doesn’t buy food for you when you buy food for it all the time.  And I don’t want to hear anyone complaining that I’d comparing spouses to dogs, that’s not the point of that sentence.  The point is, it’s not wise to assume that someone who operates completely differently will show love in the same ways you do.

If you want more on that topic, check out the book  The 5 Love Languages.  While it doesn’t address sex specifically, the premise is the same.

3. For the “other” spouse: try to initiate sometimes

For the spouse that doesn’t usually initiate.  Try it some time.  I know, I know, there are a lot of reasons why you don’t want to.  Let me address some rapid-fire style:

It feels awkward.  Yes, it will if you rarely do it.  As you do it more, it will become less awkward.  That’s just how it is with learning new things.  If you did nothing that was awkward, you’d never start a new job, drive a car, ride a bike, have a conversation, walk, or even eat solid food.  You ever see a toddler eat semi-solid food for the first time?  It looks awkward.  Like “what is this stuff in my mouth?!”  Point is, awkward isn’t a reason not to do something.

You don’t know how to. I know a lot of wives, in particular, have this objection.  Want to know the simplest way to initiate?  Try saying “Let’s go have sex”.  I know, it’s hard to spit out, but it’s simple and direct.  The other option is simply grabbing your spouse by the hand, pulling them into the bedroom and start undressing them.  That way you don’t even need to say anything.

You never think about sex.  That makes sense.  If you are geared for responsive arousal instead of spontaneous, it will likely never just “pop” into your head that you want sex.  If it does, there’s a good chance your spouse won’t be around, or it will be an inopportune time.  Luckily, we have reminders on all our smartphones these days.  So, set one for a time you know has a high chance of being “opportune”. Then set another one for a few hours earlier to give you a heads-up so you can start planning.  Then set another one in between those two just so you don’t forget.

You believe your spouse should because they want it more. This one is pure selfishnesses.  What if your spouse told you “Well if you want a birthday present, you should buy it for yourself.”  Or flowers, or an anniversary gift, or a get-well card, or whatever.  You’d probably feel pretty irritated.  Well, the same thing goes here.  There are some things that are just more “valuable” or cherished because they are given and sex is one of those things.  Once in a while, you should give this gift.  Ideally more often than one in a blue moon.  In fact, I’d encourage you to initiate sex once for every two to three times your spouse does.  See what it does for your marriage.  Don’t want to do it for them?  Then do it for yourself.  Initiating sex will make it better for you as well, so long as it’s done with the right spirit.

Whether you’re the spouse who’s always initiating or the one who isn’t, there’s likely work to be done here.  So, which side do you fit on?  Let us know in the comments below.  What are your experiences?  Have you been through this? 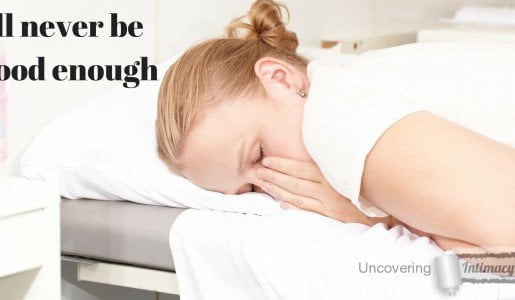 10 thoughts on “Why am I always the one who has to initiate sex?”