The worst time to spice up your sex life

The worst time to spice up your sex life

I’ve written a lot about different ways to spice up your sex life.  Those of you who have been reading a while know I tend to prefer conversations that spark understanding and long-term growth over short-term gimmicks.  However, I have been known to write posts

I’ve written a lot about different ways to spice up your sex life.  Those of you who have been reading a while know I tend to prefer conversations that spark understanding and long-term growth over short-term gimmicks.  However, I have been known to write posts on some fun little things you can try to break a rut and have created some resources to help you make things more interesting, or encourage you to explore your boundaries.

However, there are some cases when spicing up your sex life can actually be detrimental rather than fun.  Sometimes these people email me, or I talk to them as coaching clients.  I can think of a half-dozen people off the top of my head who will think this post is written specifically for them.  It’s not, because I’ve already talked to you about it. This is for the people I haven’t gotten a chance to speak to.

Typically what happens in these cases is the high drive spouse contacts me because they want more variety in their sex life. Or because there is a specific activity that they want to add to their sex life and either their spouse is reluctant or they’re afraid their spouse will reject the idea.  The basic question is usually something along the lines of “How do I get my spouse to do this?”

For these spouses, sex is a chore, not a joy

After some questions back and forth, in the cases I’m addressing today, I discover that there are some larger issues that need to be dealt with first.  Specifically, in terms of this post, the low drive spouse thinking that sex is a duty they have to perform for their husband or wife.

And this happens fairly often.  It can be for a variety of reasons:

Whatever the reason, these spouses approach sex with the understanding that it’s important for their spouse, or maybe even realize it’s important for the relationship, but there’s just no desire to actually engage.  Now, some low drive spouses will always feel that sex is work, but it’s not just work.  It’s a pleasurable activity for both that’s enjoyed, they just don’t feel a drive themselves to engage.  That’s not what I’m talking about here.  It’s those spouses who see sex almost solely as work that may yield some pleasure and good results, but not something they’d do if given a choice.  Sort of like going to the gym for most people.

Every couple I’ve talked to, the low-drive spouse enjoys sex, has orgasms (sometimes multiples), seems to have fun, in the moment.  However, when everything is done, and they’re back in an unaroused state, they seem to recall sex as being a lot of work.

I remember my wife saying “why don’t we do this more often?” on more than one occasion during our sexless years, on the rare occurrences we had sex.  I was always pretty incredulous about that statement, because I was willing whenever she was.

For some of these spouses, when you initiate sex, they see it as a request to do work for your enjoyment.  Because they have low sex drives that aren’t feeling a specific need, their brain downplays their own desire and focuses more on the work they will have to put into it.  They remember that their spouse will enjoy it, but often forget that they too enjoy it.  This is confusing to high-drive spouses, and I’ve more than a few husbands wonder how their wives don’t want sex all the time if they’re capable of having the multiple massive orgasms they see them have.

For more high-drive spouses, their brains are always in that state of remembering how good sex is, not only physically, but emotionally, and even spiritually.  But for many low-drive spouses, there seems to be a mental block that causes that memory to fade, be distorted, or otherwise watered down.

Why adding another activity can be problematic

Now, given that that is the case, adding another activity becomes a problem.  The high drive spouse will see it as an opportunity to gain more enjoyment, and more intimacy.  They’re looking for a new method of sharing pleasure and connection.  They may even know, from a few sporadic attempts, that it really turns on their spouse.  The problem is, to a low-drive spouse in an unaroused state who approaches sex as a duty, that’s not what they see.  They see yet another task to be accomplished for their spouse’s pleasure.

And so, what is intended as a way to deepen the relationship is received as a selfish request to someone who already feels they are putting so.much work into their sex life just to be available.

Of course, often neither spouse can see the other’s perspective because it’s just so alien to their own.

I’ve exasperated my wife on multiple occasions by making her talk about this with me so I could understand.  After 6 years of blogging about sex I finally think I understand it enough to at least tackle this post.  Doesn’t mean I completely understand it though.

Unfortunately, in Christianity, often the advice is simply that the higher drive spouse “tone it down”, or they suggest that perhaps the “sex” part of the marriage is now over and they should focus on other types of intimacy.  I’m hoping my readers know that’s about equally as bad advice.  Sadly, it’s one that some low-drive spouses latch on to, because it means there’s no work to be done on their end.  Though I think most of them know that that’s not a good approach.  I mean, do you really want your spouse to lose a desire to be intimate with you?

In most cases, at least in my experiences with couples, both spouses know that there’s an issue with the “sex is work” mindset.  My wife, as the low-drive spouse says that she “wants to want to”.  That is, she desires to have desire.  And I hear the same from a lot of low-drive spouses.  Particularly since most of them remember a time in their life when they did have desire.  They know it’s there, somewhere, or at least that they’re capable of it.  They just can’t access it yet.  There are too many inhibitors, be they kids, stress, hormones, mindset, or what-have-you.

When you shouldn’t try to spice up your sex life

So, in these cases when sex feels like a duty or obligation, you probably shouldn’t be focusing on spicing up your sex life. My advice to these couples is not to worry about asking for new things, but rather focus on just making sex itself not a chore.  Otherwise, you’re just adding yet another required task on the to-do list that is your sex life for your low-drive spouse who is already trying hard to meet their needs of their high-drive spouse.

P.S. I do want to mention there is a subset of spouses like this that, when aroused, are up for new things, and will be fine with them and in some rare cases can actually make sex more appealing for them.  However, it’s a bit risky, because there’s another group that while aroused will be fine with experimenting, but then when unaroused again will feel you took advantage of them.  I don’t know how you tell which your spouse is without trying, which could potentially damage your relationship.  Because even if you ask, them, sometimes what they think their response will be and their actual response don’t match up.  So, all I’ll say is tread lightly. 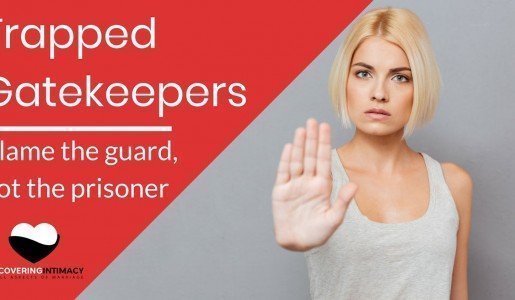 Trapped gatekeepers - blame the guard, not the prisoner
>