Have you really forgiven your spouse for the past?

Have you really forgiven your spouse for the past?

I received an anonymous question last night through our Have A Question page.  The questions is quite long, but bear with me: “Because of a disparity in our early sexual histories, I have an on-going problem, feeling that I married my wife after everyone else

received an anonymous question last night through our Have A Question page.  The questions is quite long, but bear with me:

“Because of a disparity in our early sexual histories, I have an on-going problem, feeling that I married my wife after everyone else (except me) had had sex with her. In fact, whilst refusing to have sex with me, she got out of a bed we were sharing to sleep with another man. And I still married her, because I loved her. Now, after 35 years of marriage, its just a massive heart-ache that keeps coming back.

In fact, she had sex with quite a few guys. And hundreds of times. When I did eventually get to sleep with her, I was a virgin. Now, I feel cheated, that all the cool guys used my wife before I got her, and she only got interested in me when she found out that I loved her and wanted to marry her. I’m jealous. I want to be the one who took her virginity.

I know I went into this with my eyes open, but at the time I just wanted her and nothing else mattered. Now, it matters deeply.

She says she is truly sorry, that she was a teenager who’d never been taught about the value or importance of sex, and she wishes she’d waited. She says she loves me, and that her body is mine now and always will be. (We take I Cor.. 7:4 seriously – “”The wife does not have authority over her own body, but the husband does. And likewise the husband does not have authority over his own body, but the wife does.””)

That’s where this gets nasty. I have a strong desire for her to prove her body is mine now. I feel it would compensate for the past that keeps hurting me.

It was an issue I was coping with for many years. We loved each other and were happy. But some time ago, we traveled overseas, and at a very famous landmark I wanted her to flash her boobs for my camera. We could have done it quickly and nobody would have seen much, if anything. And we’ll never see those people again anyway. She refused. Which said to me that her body isn’t mine, any more than it was back when she was refusing me sex but sleeping with other guys.

That’s when all this came flooding back to me, and its been a big issue to me ever since. I need her to back up her claim that her body is mine by doing something that confirms it. I have an idea that I’d like her to do – but it involves sexual immorality. I know, as a believer, I can’t go there, but I SOOO want to, and don’t feel that this thorn will ever be dealt with until this is resolved.

Please, if you just want to abuse me for how wrong I am, spare me. I already know that, but I still NEED her to show that I am truly the one she gave the most to.

Please preserve my anonymity, as I’ve put a lot on the line here.

So, firstly, I know absolutely nothing more than what’s given in the question.  I don’t know who this person is, or even what country they are in.  If you ever need something removed from a question to feel safer, just let me know.  Now, let’s move on to answering.

This is how I read the history:

We don’t always know what we’re agreeing to

How many of us know what we were signing up for when we got married?  I mean, I know, we have these “for better or worse, till death we do part” vows, but do people really think about them?  Do you realize what you’re vowing when you get married?

You’re promising that NO MATTER WHAT, you will CHOOSE to love your spouse.  Do you understand how insane that sounds to the rest of the world?  It’s no wonder that it’s taken as a tradition, rather than an actual vow.

So, this husband, agreed, to love his wife, no matter how many men she’s slept with, or how many times.  He said it wasn’t a problem, that he was going to love her regardless.  Now, years later, he feels differently.

Control your emotions, don’t let them control you

The problem is, we have this idea in our society that love is a force.  That it’s an emotion we need to follow.  People do a lot of things because they “feel” they need to.  The Bible has a different take on it.  According to the Bible, love is a choice.  We choose to love.  In fact, Jesus commands us to love our neighbour as ourselves.  How is that possible if it’s not a choice?

So, in light of this, we can see where this husband went wrong.  When he started feeling insecure, that she didn’t love him, the response should have been to choose to love her.  To continue to forgive her, like his wedding vows implied.  Instead, he decided to act on his feelings of insecurity.  He asked her to do something immoral to prove she submitted to him: To flash him in public where he knew others would see.  This is how strong the insecurity is.  He wants his wife to show that she’s more submissive to him than to God.  He wants to be God to her.

I’m sure that specific thought didn’t enter his mind, but that’s really what he’s asking.

Good for her for refusing.

But, it doesn’t stop there, now he wants to push even harder, for something even more immoral.  Again: prove that I’m more important than God.  Insecurity can make us do some crazy things.

Sorry, I can’t let that go uncontested.  It’s wrong, and he knows it. 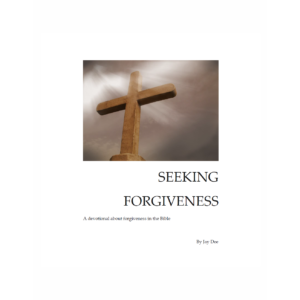 This is what I’d say to this husband:

I think you need to finally forgive your wife for her past.  She’s said she’s sorry, she seems remorseful, by your own statements, but you never seem to have forgiven her.  You “coped” with it for years, but never let it go.  Instead, you’ve been harbouring these feelings of betrayal and insecurity for years, and now it’s come to a head.

You need to decide.  Do you love her, or do you love your feelings of insecurity and betrayal?  Are you willing to submit to God, or you do you want to continue to try and be God?  Your wife isn’t the issue here.

P.S. For those that have a colourful history and are having trouble feeling forgiven, either by your spouse, or by God, then I suggest checking out my devotional on forgiveness.

<
Getting over an affair

16 thoughts on “Have you really forgiven your spouse for the past?”