Was it good for you?

Was it good for you?

A lot of couples fail to talk about their sex life with each other.  Many are afraid to discuss what they’re doing.  If you think about it, it’s kind of funny.  I mean, they’re willing to be naked and physically intimate, be opening up and 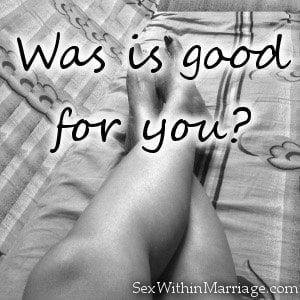 A lot of couples fail to talk about their sex life with each other.  Many are afraid to discuss what they’re doing.  If you think about it, it’s kind of funny.  I mean, they’re willing to be naked and physically intimate, be opening up and being intellectually or emotionally intimate and talk about it…that’s too much.  I take it back, it’s not funny, it’s sad.

Unfortunately, one of the scenarios that sometimes results from this sort of dynamic is that one spouse is quite unhappy with their sex life.

Sometimes it’s a wife who hasn’t orgasmed in years because her husband won’t bother to put in the effort.  Sometimes it’s a husband who is feeling sexually starved.  Could be a wife that is bored with just having missionary position sex, or a husband who feels abandoned when his wife runs off to the bathroom to shower immediately after sex.

Too often we make the mistake of believing that if sex is good for me, then my spouse is probably happy too.  But, that’s not how it works.  Especially if you don’t talk about it.

For my wife and I, we have a lot of differences in our preferences.  She’s happy with sex once a week or maybe less.  I’d rather have sex 2 out if every 3 days.  This used to be quite a sore point for us, and everyone will simply tell you to compromise, and at surface level, that’s what it looks like we did.  We generally manage 2-3 times a week.  But, it’s not the compromise that made the difference.  It was the discussion.

Compromise is a byproduct, not a solution

From talking about sex, my wife knows that sex is more to me than just a physical release.  It’s how I best feel connected to her.  And I now know that sex for her is a lot of work.  Not physically, but mentally.  Switching gears for her is quite difficult.  Add to that the exhaustion of having 5 children, including one that still breastfeeds at least once in the night, and it’s hard for her to choose between sex and sleep.

I mean, she could just lie there and say “here I am, do what you want”,  but she also knows I want a sexually engaged spouse.  So, when I initiate, she’s honest about where she is in her ability to provide that.  If she can’t be engaged, I’m not really that interested.

Not only that, but I know she wishes we had more sex, because she knows it important for me.  For us.  That means a lot to me.

So, we both understand each other’s thought regarding sex, and that’s what makes our current frequency more than a compromise.  Because generally a compromise just means neither spouse gets what they want.

And it’s not just frequency.  This same type of discussion happens about positions, activities, length of session, etc..  In almost all of these facets, we need to balance opposing preferences.  Not simply so we can compromise, but so we can understand and be more loving in our living.

Without that conversation, this is a non-starter.  I’ve dealt with too many couples where one spouse thought everything was fine, and it turns out their spouse is feeling tortured.  Too many where they assumed their sex life was good, when in fact their husband or wife was dealing with some serious temptation, and that their sex life was making it harder to resist.

So, ask your spouse: How would you rate our sex life?  What would make it better for you?

<
Have you really forgiven your spouse for the past?

How to have spiritual intimacy with an unsaved spouse
>