Getting over an affair

Getting over an affair

I received this question a couple of days ago in from our anonymous Have A Question page about recovering from an old affair: I found out about my husband’s affair 3 years ago. The affair happened @ 12 years ago and he kept it from

I received this question a couple of days ago in from our anonymous Have A Question page about recovering from an old affair:

First, I should say that my wife has never had an affair, so I don’t have first hand experience with this.  That said, I do have some ideas on the subject that might help.  Maybe my readers will have some insight as well (I know a few who have been through this type of struggle).

The choice to forgive is the defining factor

The big question here is “Will time heal”?  And while time may play a role, ultimately it is not time that will heal you.  The choice to forgive coupled with help from God will heal you.  Adultery is a difficult thing to get over.  It’s an extremely intimate betrayal.  This one thing you should only share with your spouse, you have shared with someone else.  You have every right to be angry and hurt.  But, eventually you need to decide whether to forgive them or not.  For some, it’s too hard.  Some can’t see past the sin to see the sinner.  This sinner that they vowed to love, no matter what.  And yes, the Bible says that adultery is a valid reason to divorce, but that concession is given right after Jesus says this:

Moses permitted you to divorce your wives because your hearts were hard. But it was not this way from the beginning. – Mathew 19:8

So, if you choose to forgive, then forgive him and start enjoying your marriage again.  Stop punishing him, and yourself.  Yes, he hid it for you for a long time, and so it feels like he’s been lying for years about it.  Look at it from the other side though.  He’s been scared you’ll find out for a decade.  Can you imagine living with that sort of dread?  This is the problem with hiding a sin for so long.  For the sinner, it’s suddenly a relief.  Life feels better after confession.  The healing process can begin for them.  For the one who was betrayed, it’s a sudden blow and the damage is just starting.  It takes time to process and to move on to healing.

But, it’s been 3 years since you found out.  It’s time to let it go.  Holding on is not helping you, or him.  Ask God to give you a spirit of forgiveness.  He will help you when you are weak.

I can do all things through Christ who strengthens me. – Philippians 4:13

Why did the affair happen?

There is a theme in the Bible of God taking horrible, tragic events and turning them into good.  I have faith that God can do the same with affairs.  I know He can, because I’ve seen it in people’s lives.  They’ve shared their stories with me and with others about how an affair actually turned out to be the best thing for their marriage.  Not that the affair was good!  But that it forced them to look at their marriage and make adjustments.

For the rest of my readers: You can do this without an affair!  It’s a lot less painful that way.

So, you should know the answer to the question: Why did the affair happen?  What was it he was looking for?  What’s missing in your marriage?  Affairs are rarely simply about sexual pleasure.  Often it’s more about an emotional connection, or the feeling of being desired.  Or a sense of adventure that’s missing in their daily life.  Something is going on in your marriage, or at least was 12 years ago, that made it possible for this indiscretion to happen.  I’m not saying it’s your fault.  But I am saying there is an opportunity to improve.

The Bible is clear that while we each are responsible for our actions and sins, our spouses can help protect us from temptation (1 Corinthians 7:5).

So, have you talked about the affair in a productive way?  In a “why did it happen, and how can we avoid it” way?  With the state of the marriage being the problem, not your husband.  I’m sure he’s dealt with himself as the problem for a while now.

There’s plenty original still to do

As for finding original things to do with sex, between the two of you, don’t worry.  You’ll find things.  My wife and I have been married for 15 years and I’ve been writing about sex for nearly 5 years.  We still keep having “firsts”.  I routinely get emails from couples later in life than we are thanking me for a post because it opened them up to explore something new in their marriage.  Sometimes they’ve been married for 50 years and they’re still learning new things!  You’ll find new things too.  Or pick up the spice jar printable.  I’m sure there’s something there you haven’t tried yet.

So, is there hope?  Yes, I think so.  But a lot of that hope is going to rely on your attitude and choices.  It’s your marriage.  Make the most out of it. 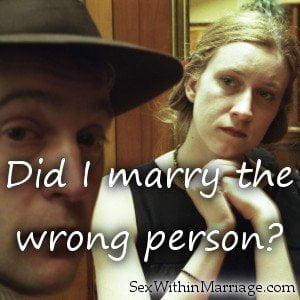 <
Did I marry the wrong person?

Have you really forgiven your spouse for the past?
>

7 thoughts on “Getting over an affair”