Is the missionary position really the only acceptable one? Where did this come from and do we really need to worry about it?

How did we get to the point that the missionary position was considered the only “holy” position? It’s actually an interesting study of history. During the Middle Ages, the church was very open about sex.  In fact, they seemed to be more open to talking about it than we generally are today.

The Church on sex during the Middle Ages

The problem is, their main focus was on preventing people from having sex.  Sex was considered sinful, filthy and only partially redeemed by procreation.  And pleasure during sex was absolutely intolerable.  After all, if sex is sinful, then enjoying it must be relishing sinful behaviours.

Around 1215, one cleric named Johannes Teutonicus announced that there was one position that was least disagreeable.  What we call the missionary position.

Why?  Their reason was that it balanced a higher chance of procreation with relatively low eroticism.  It still wasn’t good in their eyes, but it was the lesser evil. Many have rationalized the choice with other reasons since then, such as:

After that, the church began handing out penances for anyone who had sex other than in the missionary sex position.  The punishment included eating only bread and drinking only water as well as abstaining from sex for a certain amount of time, depending on what activity you were engaged in:

These rules were all created in order to support a single mindset held by the church: sex was evil and accepted as necessary for procreation.  Enjoyment, excitement desire and pleasure were inappropriate.

Confused about what you could and couldn’t do and when?  Check out the handy flowchart on the right that I found (click on it to make it bigger).

The Bible on sex

Now, while I believe the church tries to faithfully reflect the Bible, it’s often wrong.  And while the church is slowly becoming more sex-positive, Christian culture on average is still far from what I believe God’s views on healthy sexuality are.

And there are still some of these archaic beliefs hanging around.  While going through some of the comments in our latest survey, there were still comments from husbands lamenting that their wives believed the missionary position is the only acceptable position for Christians.

The truth is, there’s absolutely no biblical justification for that.  I don’t even really know what verses to cite because the idea isn’t even based on a twisting of specific passages, but rather on a false belief right from the outset: that sex is evil.

Yet, right from the outset, before the fall, before sin was introduced into the world, sex existed.

Therefore shall a man leave his father and his mother, and shall cleave unto his wife: and they shall be one flesh.

So God created man in His own image; in the image of God He created him; male and female He created them. Then God blessed them, and God said to them, “Be fruitful and multiply; fill the earth and subdue it; have dominion over the fish of the sea, over the birds of the air, and over every living thing that moves on the earth.”

Then God saw everything that He had made, and indeed it was very good. So the evening and the morning were the sixth day.

God saw everything he had made, including sex and said, “it was very good”.  Sex predates the fall and sin as part of God’s perfect creation.  There’s no mention of what positions are good and which aren’t.  The missionary position isn’t mentioned at all.  In fact, the only allusion to a sexual position is in Song of Songs:

His left hand is under my head, and his right hand doth embrace me. – Song of Songs 2:6

Which many people will try to tell you is one position or another, or manual sex, or whatever.  I think it’s pretty vague and you can’t build a doctrine based on this verse alone, either way.

Somewhere between 1945 and 1965, the name “missionary position” was coined because missionaries were taught that this was the only proper sex position.

What I think is happening with the missionary position

I have trouble believing and Christians who read their Bible actually believe that the missionary position is the only acceptable one to God.  I think one of two things are likely true:

And I think both of these are unacceptable to God.  We’re called to read the scripture, to know it in and out.  We should be able to justify our beliefs with God’s word. Furthermore, I think God would be quite upset to be used as a means of avoiding intimacy.  Nothing in the Bible tells me that that behaviour is okay.

There’s nothing wrong with missionary position

Don’t get me wrong, the basic missionary position is a great sex position with some definite benefits. Eye-to-eye contact and lots of skin-to-skin contact, both of which are great for intimacy. It’s a good position that can be adjusted for deep penetrating if you desire, and for some women, enough clitoral stimulation that they can orgasm from it.

Tip – add a pillow under her hips. This can change the angle, which can allow for both deeper penetration and allows for more stimulation of the clitoris.

But there many other positions that are great as well. Some add eroticism, some are better at g-spot stimulation, some add increased clitoral stimulation, adding to orgasm-ability for more women, some add increased deeper penetration. Others are great to give your legs or hips a rest, so you don’t have to use your arms as much. Woman-on-top positions allow you to change who is in control, and spooning positions are great for lazy-morning sex because you can both be lying down. Others are useful or for a variety of reasons. It’s good to have a somewhat varied repertoire of positions so that you can use them when the situation calls for it.

If you’re looking for increasing your collection of positions that you use in your marriage bed, I’d highly recommend Married Dance’s deck of sex position cards. They’re illustrated with stick people, so they’re Christian-friendly.

What can you do to fight this missionary-position-only mentality?

Well, unfortunately, there’s not too much.  The only thing you can try is to challenge them to teach you about their viewpoint.  Have them explain why they believe what they believe.  Have a rational discussion about it and see where their views come from.

Many won’t be willing to.  Some because they believe talking about it is wrong, others because they know they’ll feel convicted if they have to talk about it.  We see that all the time in churches.  There are entire denominations where the book of Revelation is largely ignored because if it was actually read, they’d have to change a lot of their doctrine.

It’s, unfortunately, a habit many of us have as Christians: We believe the Holy Spirit convicts us when we’re wrong … so we do our best to avoid Him when we don’t want to be right.

So, invite them to wrestle with the Holy Spirit.  After all, it’s not you who will convince them.  But you can make the introduction.  However, be aware:  You’re forcing a choice.  They may choose wrongly and decide to ignore the Holy Spirit.  That has real and serious consequences.  God should never be brought into a situation lightly.  And in a lot of cases, a big part of their decision to listen to or reject the Holy Spirit will likely rest on your relationship.  It is possible to pre-condition them to ignore God.

So, be wise in your confrontation.  I can’t tell you if this is the right time or not.  You’ll have to judge that for yourself. 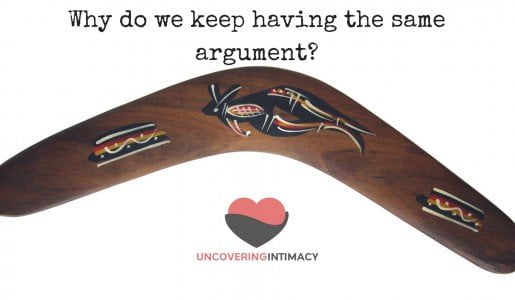 <
Why do we keep having the same argument?

Are you willing to risk sex to gain intimacy?
>

10 thoughts on “Does the missionary position make sex holy?”