Probably the number one piece of advice I hand out to people is “talk to your spouse about it”.  It’s amazing how often that simple answer makes huge changes in marriage. But, I wanted to know how much of a difference talking about sex makes.

Probably the number one piece of advice I hand out to people is “talk to your spouse about it”.  It’s amazing how often that simple answer makes huge changes in marriage.

But, I wanted to know how much of a difference talking about sex makes.  It’s not something Christians are comfortable talking about most of the time, even with their spouse.  So, why do it?  Well, today we’re going to figure out if it’s worth while.  Since May I’ve been running a survey asking people what their habits regarding discussing sex were as well as some questions regarding quality and frequency of sex.

Now, I haven’t been through the numbers of our survey, so I’ll be learning with you.  I have a guess on how it will turn out based on my experience, but we’ll see if it’s right.  Ready?  Alright, let’s go.

Age is fairly standard for our previous surveys (everything from 20-85, but the bulk between 30 and 60).

Length of marriage is fairly typical as well.  76 and 73 responses at 0-5 and 5-10 years respectively, then a spike of 119 respondents with 10-15 years marriages, and then it declines fairly steadily down to 45 years, after which we have a few respondents all the way up to one 80 year marriage.

Does sex decline with length of marriage?

While we’re here, I thought I’d check out whether or not sex declines with the length of the marriage.  After all, that’s what we all hear, right?  Sex dies as the marriage progresses.  Well, not at much as you’d think.  At least, not if you’re in our community, on average.

Note: I thought the spike at 50-55 was from one person who was throwing off all the numbers.  But, even without him, it’s still at 3.3 times per week for that age range.

The way people talk though, you’d expect this to be more sudden and earlier on in marriage.  But the decline is quite slow it seems for the average couple.  I would suspect this indicates that it would take minor adjustments over the course of the marriage to turn that into an increase instead.  Sadly, what most of us do is wait until it hits rock bottom, then have to do a complete marriage overhaul including some very uncomfortable discussions regarding sex, because we’re not in the habit of having them.

How much is the perfect amount of sex?

If you ever wanted to prove that more sex is best, here you go.  This survey, I asked people three questions we’ll use for this one:

On average, those who answered they’re not happy with the amount of sex they’re having and want less of it, they’re having sex, on average, 0.7 times per week.  But, it should be noted that these people are the outliers.  Only 3 respondents answered this way (2 women, 1 men).  One of the wives and one of the husbands said they were having sex once a week and that was too much.  The other said twice a year was too much.  The point is, those who aren’t happy and want less sex aren’t really having much to begin with.  Sounds like they’re aiming for zero sex.

Far more common is the “No, I’d like more” crowd.  This consists of 221 men and 57 women who, on average, are having sex 0.8 times per week (3-4 times a month).  What’s interesting is that the women who responded were having sex once a week, on average.  More than the men (0.7 times per week), and they still weren’t satisfied.

And then we have another set of outliers.  Those who were content with the frequency of sex they were having, but would prefer a little less.  This consisted of a total of 11 respondents (less than 2%), 9 women and 2 men.  The men were having sex about once a week and the women 2.4 times per week.

Next, we have the “yes, but more would be good” crowd who said they were having sex 2.2 times per week.  Both the men (148) and women (63) were having the same amount of sex: 2.2 times per week.  This is our largest group of women, consisting of 37% of our female responses.  They’re having sex more than twice a week, on average, and their happy … but would like more.  Now, granted, this blog does tend to attract higher-drive spouses, but still, this is pretty damning to the stereotype that wives don’t want sex.

Lastly, and here’s the kicker.  The group that said their sexual frequency was perfect.  Apparently the “perfect” amount for women (from our survey) is 3.0 times per week, and 3.3 times per week for the men.

It seems the more sex you’re having, the more you want it.   Who could have guessed.

Are you happy with the quality of sex in your marriage?

Here’s another interesting one as we pass by it.  If you were asked to describe your sex life, which word would you use?  Non-existent, boring, routing, good, exciting, adventurous or kinky?  And which do you think people enjoy the most?

Well, unsurprisingly, non-existent sex lives aren’t terribly enjoyable (2.0 on a scale of 0 – 10).  I am a little surprised that isn’t lower, to be honest. Similarly, boring sex lives only got a 2.6.

Routine isn’t all that bad, sitting in a mediocre score of 5.6 on average and “Good” being better at 7.4.

Then we get to the last three: Exciting, Adventurous and Kinky.  Now, I’m not sure what the difference between exciting and adventurous is.  I guess exciting is … well … exciting, but adventurous speaks of trying new things together.  It’s not just physical intimacy, but experiential intimacy rolled in as well.  There’s an additional element of risk and vulnerability that leads to more satisfaction.  Perhaps that’s why “exciting” scored a 8.6 and “adventurous” scored a 9.1 out of 10!

I thought kinky would take the cake, but it only came in at a 8.8, which is still really good.  But, I wonder why … could be that only 6 respondents said they were kinky and we didn’t have enough data to get a real number.  Maybe kinky is going too far?  Maybe it loses the adventurous aspect when you’re always living on the edge.  Who knows.

Point is, “Adventurous” seems to be what to aim for if you want the most satisfaction.   They also tend to have the most sex (3.0 times per week on average), thought exciting and kinky are doing pretty well at 2.8 times per week.  And just to round it off, Good was 2.0, Routine was 1.4, Boring 0.8 and non-existent an unsurprising 0.1 times per week (or once every 2.5 months or so).  Want more sex?  Spice things up a bit.

What effect does talking about sex have on your sex life? 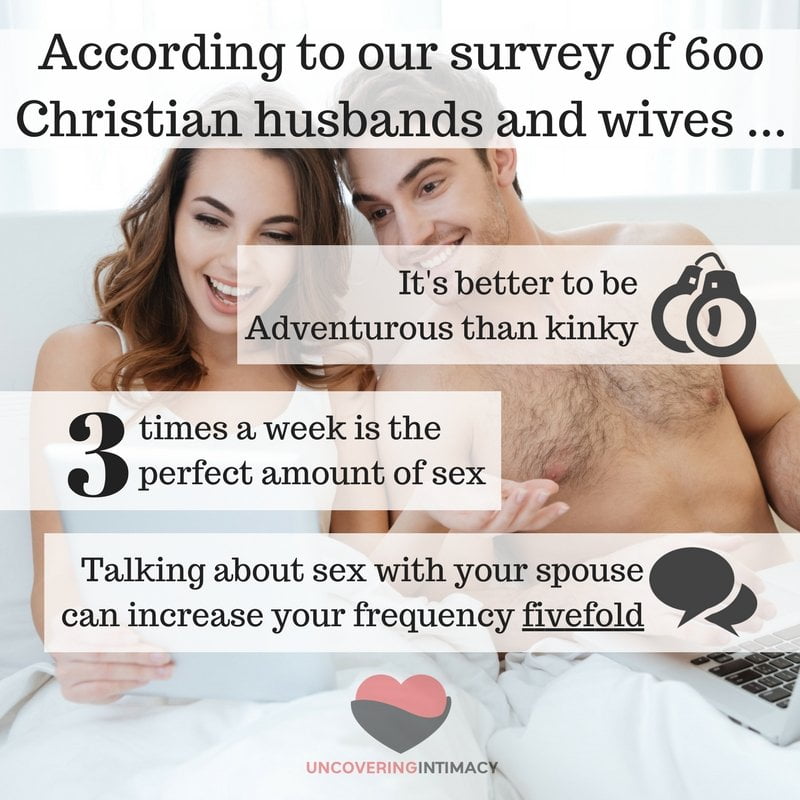 Does talking about sex make you have more sex?  Well, I can’t say it does from the data, because someone will pull the “correlative, not causative” argument on me.  However, I can say it from my coaching experience and the data supports this.

Those who don’t talk about sex tend to have sex 0.6 times per week (about once every 2 weeks), and talking about it less than once a year helps, but not much (0.8 sexual encounters per week).  Yearly and quarterly talks make about the same improvements (1.1 and 1.2 times per week respectively).  I’d imagine all of these categories fall under the “we talk about it when I can’t take it anymore”.  Probably small improvements at the time, but eventually it just sinks back to the previous frequency.

The problem is it requires a conversation.  Not just one of you talking.  Consistently in the data, we saw that regardless of the sub-topic regarding sex, if both spouses aren’t participating, it doesn’t make a huge difference.  And if you’re looking for a topic to start with, it seems most talk about sex drive differences.  But, you have to talk about them together.  Want a starting point?  I suggest our short e-book on sex-drives.  It will help you lay the ground work for talking about sex drives in a way that isn’t based on which is right or wrong, low or high.  Rather it will help you understand how your various systems work together to accelerate, or inhibit, arousal and give you some direction on how to deal with the differences.

Did I miss anything you were curious about from our survey?  Have an idea for another survey, or follow up questions? Anything surprise you in the data?  Let us know in the comments below. 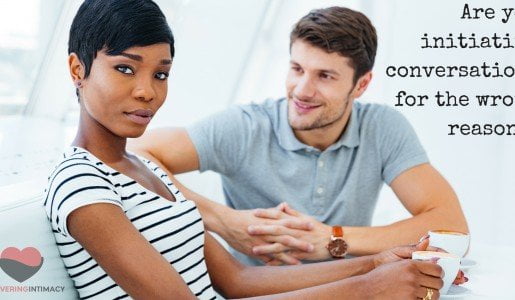 <
Are you initiating conversations for the wrong reasons?