6 ways to ensure you have a terrible sex life

6 ways to ensure you have a terrible sex life

If you haven’t heard yet, I’m planning to run a webinar in the near future. If you have a preference on the topic, you should fill out this form to vote. Currently, the topic people want to hear about most is how to have a

If you haven’t heard yet, I’m planning to run a webinar in the near future. If you have a preference on the topic, you should fill out this form to vote.

Currently, the topic people want to hear about most is how to have a great married sex life.  So, today I thought I’d share some ways to have a terrible sex life that I learned from The Gottman Institute.  Turns our that the Sloan Center at UCLA did a study of 30 committed hetero couples with young children in Los Angeles.  During their research, they found that the couples with bad sex lives all had the same bad relationship habits.

Do you have any of these habits in your marriage?

1. Don’t spend much time together during the week

One of the questions I ask my coaching clients in their intake questionnaire is: “How much time do you spend together during the week?”  The reason is that you cannot have an intimate relationship without a relationship.  Marriages are holistic and every part of your relationship affects every other part.  If you aren’t spending time together, then there’s a good chance you won’t be having sex either.

Our marriage used to be like this.  We wouldn’t do much together because being together seemed to always result in a fight.  So we just avoided each other most of the time.

2. Become a workaholic or put your children first

If you start putting either your job or your children foremost in your life, then your marriage is going to take a back seat.  Men tend to have a higher risk of being workaholics, and women tend to gravitate towards putting their kids first, but not always.

Now, whether the relationship is contributing to being work or children-centric, or the other way around, it doesn’t matter.  In our case, it was easier for me to stay at work longer than to come home and deal with the conflict.  But, it’s a spiral.  When you do that, the relationship suffers, making it easier to stay away.

One of the challenges my coaching clients love/hate is when I ask them to go to dinner and don’t talk about:

The very next question is always “what else is there”?  Well, couples with bad sex lives typically don’t know.  They just keep talking about logistics: who has to do what when and where.

They don’t talk about how they feel, their hopes, their dreams, their fears, and struggles.  Those are the conversations that really matter.

4. Make everything else a priority except the marriage

Not just kids and work, but ministry and church.  Going out with friends.  TV.  Facebook.  Computer games.  Whatever.  If there doesn’t ever seem to be time for the relationship, but there’s always time for everything else, then there’s a priority problem.

This is something I hear from a lot of spouses.  I get so many emails from husbands and wives saying their spouse always rejects them for sex, claiming it’s too late, or their too tired.  Yet they seem to have plenty of hours in the week to watch NetFlix, be on Facebook, play video games or whatever.  Always time for time wasters and no time for the marriage.

5. Have parallel lives rather than entwined lives

People don’t drift together, they only drift apart.  And statistically, those couples who allow themselves to drift far enough to be living parallel, but not entwined lives have bad sex lives.

It takes intentionality to draw towards each other, and frankly no small amount of character.  It’s not easy, at least not at first.  The good news is that it gets easier the more you practice it.

6. Allow conflicts to damage their relationship

Conflicts are neither good nor bad.  A conflict just means two people have different ideas.  It’s how we deal with conflict that matters.

Couples with bad sex lives tend to either avoid conflict or let it blow up.  They don’t seek to use these opportunities to grow closer and deepen intimacy.

Each conflict is a chance to learn more about your spouse, not just what they think, but how they think.  It’s an opportunity to learn and understand their perspective and grow as an individual.  It gives you a time to work together to find a way to do what’s right and is not only a good relationship building event, but also one for character building.

What can you do about these?

If you exhibit these habits in your relationship, the good news is that the answer to fighting them is relatively simple: stop doing them.  In fact, do the opposite.  Don’t confuse simple with easy though.  It’s hard to change bad habits.  If you need help, it’s worth getting some coaching on how to break these habits in your marriage.

If you like this post and want to hear the research that tells you the other 7 habits couples with healthy sex lives do, don’t forget to fill out our very short questionnaire. 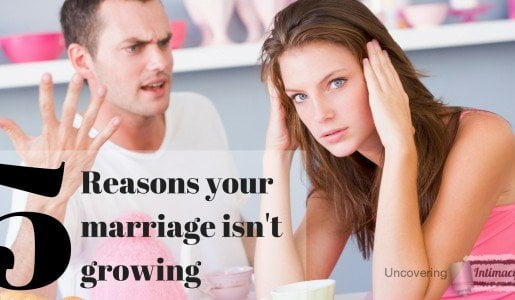