Putting the kids first will destroy your marriage

Putting the kids first will destroy your marriage 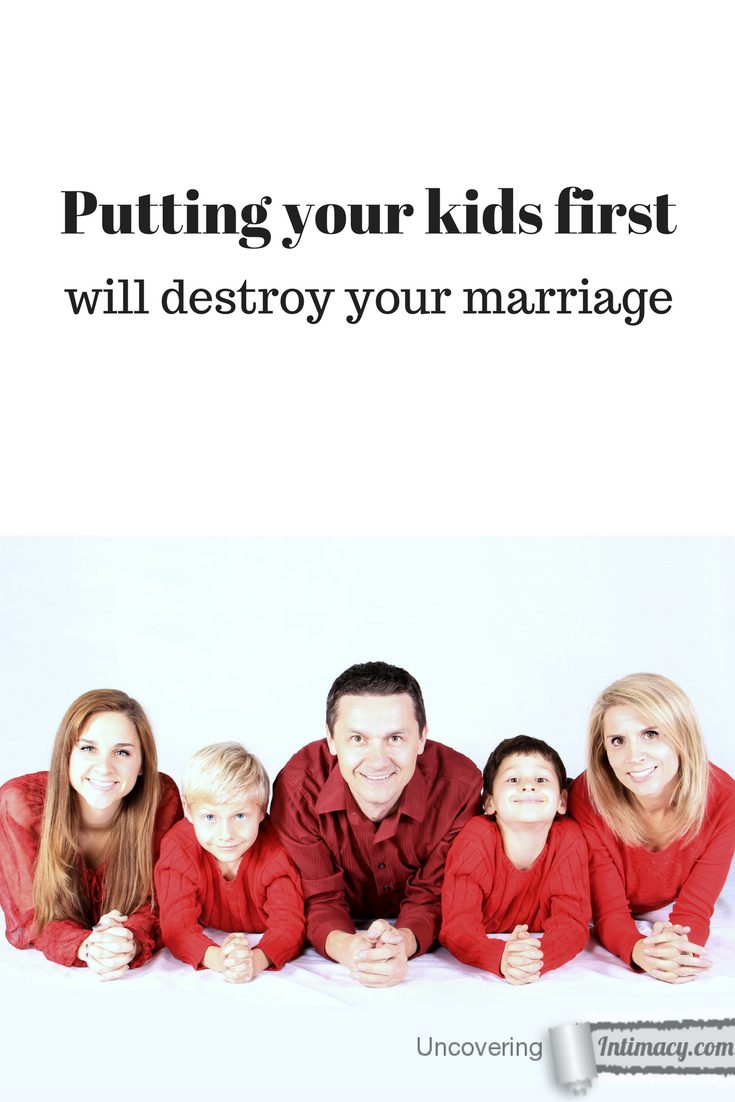 I get a fair number of emails where one spouse is putting the kids first in the marriage.  Most often it’s the wife, but I have had a few emails from wives where it’s the other way around.

Putting the kids first can show itself in a lot of ways:

And there are many more examples I get from readers.  The basic problem is always the same.  They have put their children above their spouse in the marriage.

There are times when the children need to come first.  Diaper changes, meals, injuries, etc.  They all need fairly immediate attention.  I’m not suggesting you walk away from a bleeding child to go have a cup of tea with your spouse and talk about their day.

Nor am I suggesting that you ignore your children except for emergencies.  But, it needs to be clear that your primary relationship (after God) is with your spouse.  Not with your child(ren).

Children need their parents to focus on each other

What children need more than anything, except the essentials of survival, is to have a loving family environment.  That includes parents that have a solid relationship.  This is why I have a problem with spouses who “stay together for the kids”.  If they’re going to put that much effort into it, they should work on the conflicts in their marriage.  They should “fix the marriage for the kids”.  That would be of more benefit to their children.

Because parents who focus on their children damage their relationship with their spouse.  Relationships always drift apart, they never drift together.  If you fail to put effort into your marriage, it will drift.  Faster than any other kind.  The close, daily proximity of spouse forces a dynamic of either growth or distance.  Spouses are together all the time.  Typically they see each other in the mornings, evenings and weekends.  They sleep in the same beds and use the same bathrooms.  Your options are to deepen the relationship, or to begin to resent each other.  There aren’t any others.

When resentment takes hold, then the relationship is being constantly damaged.  Your children will grow up seeing this as their model of marriage.  They will learn that spouses live together and try to act civil, but really they don’t like each other much.  They just “put up with each other”.  That becomes the model of marriage that they will carry forward in their own lives.

Many couples get divorced once the children leave the home

Unfortunately, a lot of couples have this “kids  first” mentality. It actually ends up damaging the children.  Once the kids move out, they realize that they have based their entire relationship on raising the children.  All their conversations have been about the logistics of raising kids.  Grocery lists, bills, scheduling activities, how they did in school, etc..  Without the children, there’s no relationship.

And both spouses have grown as individuals over the last 20+ years of raising children.  So, now they’re different people.  They find they’ve “grown apart” because they really haven’t been growing together during this time.  They’ve been acting more like co-workers accomplishing the task of farming children.  That’s not the same as building a life together and growing a relationship with that person.

In a lot of cases, they get divorced.  Statistically, this hurts the children significantly, even if they’ve all already moved out of the house.  The children will have a higher chance of getting divorced themselves as well as increased risk of depression.  Kids still in the home are less likely to proceed on to higher education and less likely to get higher paying jobs.

Even if they don’t get divorced, they live out the marriage as a sham.  Staying together because “that’s what you do”.  A small few actually turn their marriage into something real.

Focus on each other if you want to help your children

When you got married, you vowed to love and cherish each other.  Until the day you die.  Not until you give birth.  If you really want to nurture your children in the best possible way, do it by making your marriage solid.  That means following through with what you promised on your wedding day.  Building a relationship that causes you to grow together instead of growing apart.  Focusing on your relationship above that of your children.  Above.  Not to the exclusion of.

All I’m saying is give your spouse at least as much attention as your children.  That doesn’t mean that if you’re home with your child eight hours during the day that you have to block off nine hours for your spouse.  What it does mean is that after the eight hours, you need to let your child play by themselves for a bit.  Or put them to bed so you can have some quality time as husband and wife.

Too often what I see happening is the one, or both, parents are doting on their child while starving their relationship with their spouse.  That is neither productive, nor helpful, to the child, or the parents.

A child needs to see their parents love each other, and that doesn’t come about by handling the logistics of the child.  It comes about by creating true intimacy with each other.  That takes time and effort.  Most importantly, intimacy takes time alone.  That means time without children.  Be it time at night, date nights, adults only vacations, or whatever works for your marriage.  Find some way to reconnect regularly.

Do not put it off thinking “well do it later when things calm down”.  Things will never calm down, and it’s infinitely harder to repair a marriage after it’s been damaged.  It’s far easier to shore it up while it’s still intact.  So, focus on your marriage today, and every day.  Do it for the kids.

21 thoughts on “Putting the kids first will destroy your marriage”