What to say when your wife tells you about her day

What to say when your wife tells you about her day

It’s often difficult for men to listen to their wife talk about her day.  For many men, it’s not something they naturally feel the need to do. Men tend to more easily compartmentalize their life.  When they come home, they want a chance to switch 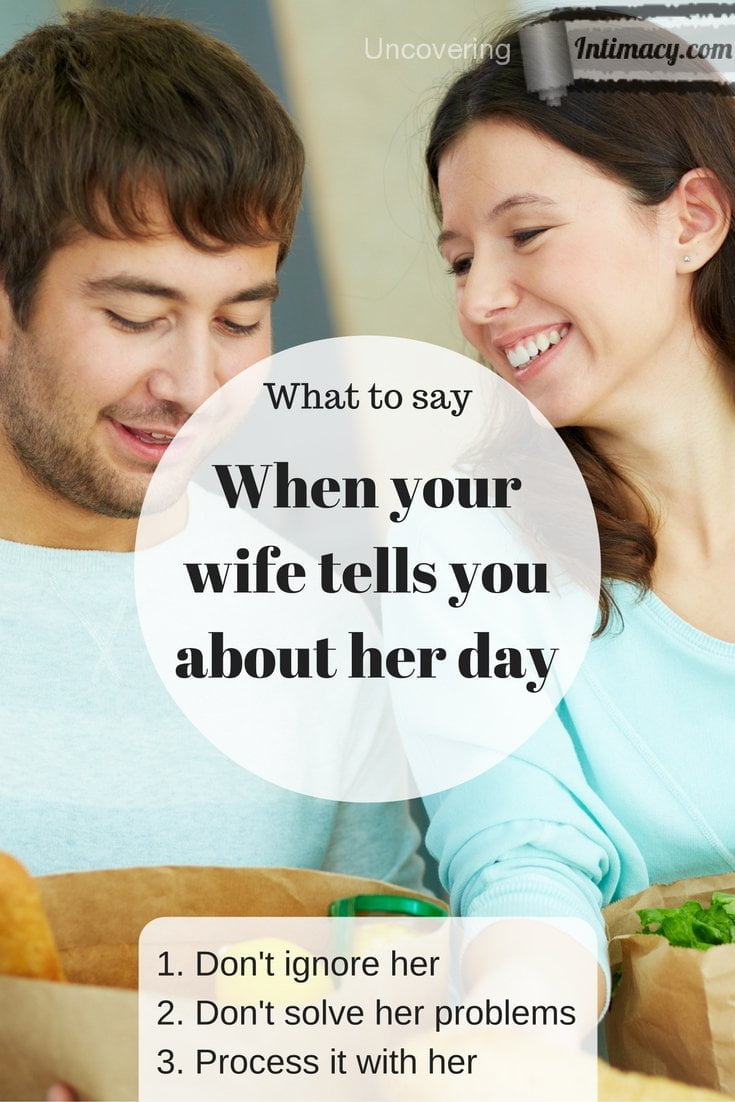 It’s often difficult for men to listen to their wife talk about her day.  For many men, it’s not something they naturally feel the need to do.

Men tend to more easily compartmentalize their life.  When they come home, they want a chance to switch gears, but they don’t feel the need to process what they’re leaving behind.  Many women, however, feel the need to emotionally deconstruct the day before moving forward.  This is owing to female brains generally being more internally connected.  They can’t just drop off one part of their life and pick up another.  They’re all connected.

So men get a bit frustrated because most of them can go from work to thinking about sex without skipping a beat, but women need time to put to rest the events of the day, tie up those open loops emotionally, and then they are more available to start thinking about opening new connections.  Like intimate connections.

But, men don’t know what to do with this.  Because we often don’t feel the need to decompress in that way ourselves, we don’t know how to react.  As a result, we often do one of two things, both of which are wrong:

The first thing we do is to just not engage.  We don’t know what to do, so we do nothing.  In the worst cases, we just ignore or walk away from the conversation.  Only slightly better is to pay attention enough to inject the occasional “uhuh”, “oh yeah?” or “really?” just so they think we’re engaged.

The problem is this is so easy to do, but in the end, we’re damaging our relationships.  We send the message that what our wife is saying is uninteresting or unimportant.  In short, we’re showing contempt for their needs, and that is a very dangerous thing for your spouse to pick up on.

The other issue is that she might ask a question and you might commit to something you aren’t even aware of because you aren’t really paying attention.  That leads to a perceived broken commitment, which leads to a lack of trust, and rightly so.

The other thing that men do is they go into problem solver mode.  Our wife is sharing problems, and so we jump in to fix them.  Now, we mean well, we want to help, but it’s not helpful.  She doesn’t want us to solve the problems in her day, and when we do, it often comes across as “this is what you should have done”.

Plus, because her intention is not to problem solve the day, but rather to process her emotions about the day, it comes across as though we’re not really listening to her.  That’s really a communication issue because she’s assuming we have the goal in the conversation as her, but it’s still damaging to the relationship.

So, if we can’t ignore her and we can’t fix it, what’s left?  That’s where many men get stuck.  They don’t see another option.  The one they don’t see is to process the day with her, emotionally. 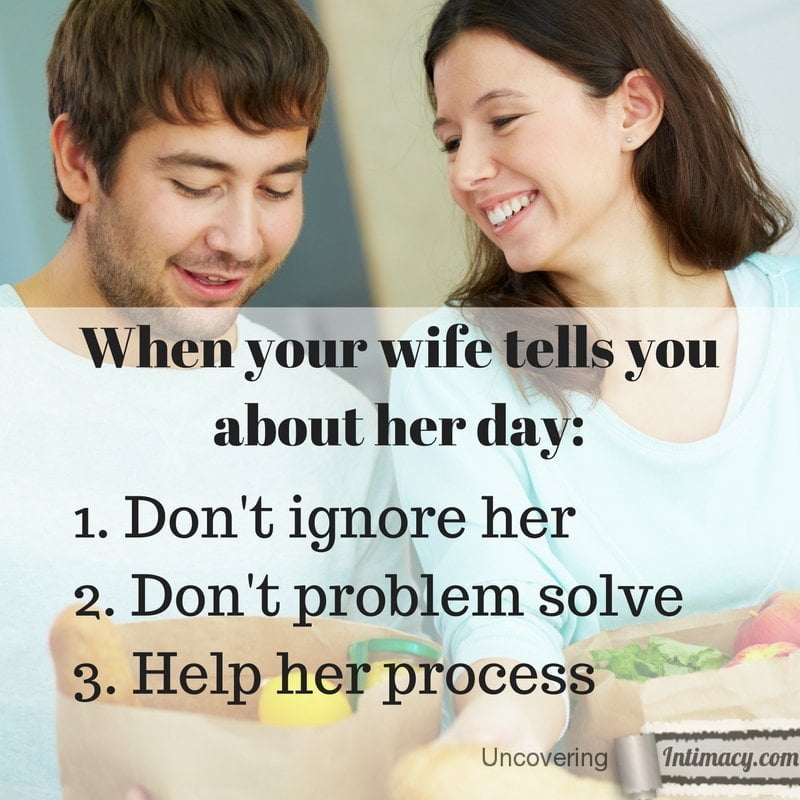 What she wants is to share the experience of the day with you.  She’s reaching out and trying to engage in experiential intimacy, even though you weren’t there first hand to experience it.  This is an opportunity, and an invitation, to grow in intimacy.  So, what do you do?  When she relays something good, be happy for her, and show her you are happy.

Wife: I got a text from my friend today that hasn’t been returning my texts or calls, and I was worried she was mad at me.  Turns out she just broke her phone and never got the messages and she finally got a new one.
Husband: Oh, that must have been a relief.
Wife: A big relief.  We’re going to go out for coffee tomorrow to catch up.
Husband: Sounds like that will be fun after being disconnected for so long.

When she relays something not-so-good, then reflect that.

Wife: I was driving home today, and this transport truck came out of nowhere and nearly ran me off the road.
Husband: Wow, that must have been frightening and stressful.
Wife: It was, I felt very shaken for the entire ride home.
Husband: Well, I’m glad you made it home safely.

See, it’s not rocket science.  You don’t have to say the perfect thing.  You just have to reflect back the emotions she’s already showing.  It’s sort of like Active Listening to the next level.

Now, if you start seeing patterns in her decompressions, that every day the same thing occurs, then you might want to bring it up later in another conversation.  If she’s getting nearly run off the road by trucks on a weekly basis, it might be a good idea to suggest an eye doctor visit in the near future.

Likewise, if your wife asks you for help solving her problems, don’t just reflect her emotions back.  She’s asking for your opinion on how to solve it.  But, remember, she’s just asking for your opinion.  You should give it disinterestedly.  By that, I don’t mean don’t be interested, but rather, give it knowing she still has the choice to follow it or not, and don’t get upset if she doesn’t follow your advice.

I hope that helps all the confused husbands out there who don’t know what to say when their wife is telling them about her day.  And women, let me know in the comments below, is this what you’re looking for from your husband?

<
Do you feel like a sexual being, or a sexual object?

Having kids does not mean a healthy sex life
>