Do you feel like a sexual being, or a sexual object?

Do you feel like a sexual being, or a sexual object?

I’m trying to process something I was thinking about on my commute home today.  It has to do with this verse: The wife does not have authority over her own body but yields it to her husband. In the same way, the husband does not

I’m trying to process something I was thinking about on my commute home today.  It has to do with this verse:

Now, I believe in the inerrancy of scripture.  I believe this is true.  However, I think combining this with some bad teachings in Christianity has created a huge issue.  I’m still processing this, so bear with me as it’s not quite a completed thought.

I know men and women grow up differently in our society with regard to what they are taught about themselves as sexual beings.  Men generally grow up knowing we’re sexual.   Depending on your church or family, you might grow up thinking that’s okay or not, but we generally grow up knowing we’re sexual beings.  But, I think women might get a different message.

2. Does this place women in captivity?

As a result, I wonder if women grow up sort of with this feeling of being in captivity.  Or maybe of being a restricted substance.  Something of a mix between a slave and a drug.  One that has an owner that will some day show up to claim what is theirs.  So, they get married, and then this verse gets put into practice:

And for the men, who feel they are sexual beings, this seems equitable.  This is a sharing, this is me giving you who I am and you give me who you are.  But, if you grow up with a context of feeling that you are a sexual object rather than a sexual being, then it feels different.  This feels like a contract.  You got married, and now you have to give up the goods.  Your owner has come and expects his plaything or his drug of choice.

And I can’t help but think this causes a lot of damage to women.  I mean, how can you freely give yourself to your husband when you never felt you actually had possession of your sexuality to begin with?  I don’t mean you have to have exercised your sexuality.  I’m saying women need to understand they are their own sexual being.  They aren’t a toy, a drug, a slave or any other sort of object.  Their sexuality is a part of who they are.  And when they treat it like a thing, then that part of who they are gets locked away.  It becomes so guarded, that I think they don’t get fully experience life.  A part of them is missing.  A part that God intended to be there, integrated and whole, whether it’s exercised or not.

3. A question for the wives

So, I want to ask wives:
Do you feel like a sexual being or a sexual object?
Do you feel like you’ve given yourself to your husband or did you just surrender it out of compulsion because you got married and you had to?

If you answered the latter to either of those, I don’t think it’s your fault.  And I want to try and find a way to help.  To help you claim that part of yourself so that you can give it freely.  I’m trying hard to find the answer to how to do that.  In truth, I think a part of it is in my course, and for many of the women who go through it, it helps.  But it’s not complete.  There’s still something missing.  There’s still damage to be repaired. But, I think this is the beginning of that answer or at least a step on the way.

Men, let’s just be quiet and let the women share, if they’re willing.  You can email me, but please don’t comment.

<
Do you have time to explore? 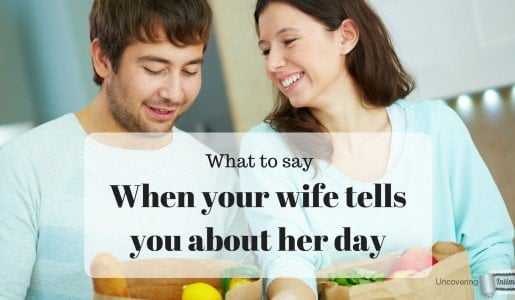 What to say when your wife tells you about her day
>

14 thoughts on “Do you feel like a sexual being, or a sexual object?”