What do you do if you are asexual?

What do you do if you are asexual?

This question is starting to come up more and more.  This week, I received the following message on Facebook: So what about ‘Asexuals’? I am a college student currently in a dating relationship and to be honest, I have pretty much no sexual attraction, desire, or

This question is starting to come up more and more.  This week, I received the following message on Facebook:

So what about ‘Asexuals’? I am a college student currently in a dating relationship and to be honest, I have pretty much no sexual attraction, desire, or drive. And although I don’t really want to pin myself to any labels, I fit the Asexual description. I’m not too worried about now, since me and my partner have decided to wait for sex, but I’m thinking its going to get quite complicated in the future. (My partner is definitely not an asexual person). For a married couple, do you think it would be a still healthy marriage if a couple didn’t have sex at all? My thinking is that because I have no desire for sex, anytime we did have it would be out of obligation, and it would just be me “giving in” to my partner, which I don’t think is the ideal reason or motive for sex.

Now, typically I only answer questions from married couples, but I think asexuality is something that married couples deal with as well, so I’m going to give my answer publicly (with the questioner’s permission), in the hopes that it might help others.

Should asexual people get married?

I think this is the first question that should be asked.  Should people who identify as asexual get married in the first place?  After all, if sex is a part of marriage, and they have no interest in sex, should they bother getting married?

Well, let’s see what the Bible says on the topic.  Honestly, we don’t have much to go on beyond 1 Corinthians 7.  It starts with:

Now concerning the things of which you wrote to me: It is good for a man not to touch a woman. – 1 Corinthians 7:1 NKJV

Which is extremely confusing.  In fact, it seems to contradict the rest of the Bible, from Genesis, where God commands us to have sex and multiply, to a mere 4 verses later when Paul himself tells spouses not to deprive each other of sex.

This is why I prefer the alternative punctuation as in:

Now concerning the matters about which you wrote: “It is good for a man not to have sexual relations with a woman.” – 1 Corinthians 7:1 ESV

If anyone thinks that he is not behaving properly toward his betrothed, if his passions are strong, and it has to be, let him do as he wishes: let them marry—it is no sin. But whoever is firmly established in his heart, being under no necessity but having his desire under control, and has determined this in his heart, to keep her as his betrothed, he will do well. So then he who marries his betrothed does well, and he who refrains from marriage will do even better.

Some will argue that this passage says you shouldn’t marry, and the NKJV and others seem to lean towards this way too, but I think this passage is about waiting to marry until your relationship with God is solid, but if you cannot control your desires for your betrothed, then get married first rather than sin.  And then continue to work on your relationship with God, understanding that it will be harder now, because your attention is split.  Again, I think this brings Paul’s writings into harmony with the body of God’s Word.

So, let’s take a look at a passage between these two:

I wish that all were as I myself am. But each has his own gift from God, one of one kind and one of another. To the unmarried and the widows I say that it is good for them to remain single as I am. But if they cannot exercise self-control, they should marry. For it is better to marry than to burn with passion.

The first thing we need to realize that it is highly likely that Paul was married earlier on in his life.  It has been argued that he could not have attained the position he had with the Pharisees if he were not married.  It’s quite possible, being of such a high standing Jewish family, that his family disowned him when he converted to Christianity.  This would have been incredibly difficult, and brings potentially new understanding to his words “the married man is anxious about worldly things, how to please his wife, and his interests are divided.”  If Paul went through this difficult choice, to choose between his wife or Christ, and chose Christ…well, that makes his words all the more meaningful.

Furthermore, Paul doesn’t define exactly what he means by “I wish that all were as I myself am.”  Most will say that he means celibate…but I think perhaps he means undivided in his following of Christ.

So, what are we left with.  Well, that it’s okay to marry, that it’s not a sin, and that it’s better to marry than to twist God’s gift of sex into lust for someone who isn’t your spouse.  Again, I feel we’re inline with scripture once more.

So, what does this have to do with asexual people?

Well, it seems that those who have strong sexual drives have little choice: they should marry, in order to avoid sexual immorality. But, for those who do not have such strong sexual desires, you have the option: to marry a spouse, or not, and focus on your relationship with God.  I don’t mean you can’t have other relationships, but arguably, if they aren’t your spouse, they won’t have as strong a pull for your attention as anyone else.

So, that still leaves an asexual person with a choice: to marry or not.  So, what about sex?

What about sex if you do get married?

For a married couple, do you think it would be a still healthy marriage if a couple didn’t have sex at all?

And that’s a difficult question.  However, your statement earlier of saying your partner is definitely not an asexual person clears it up easily.  As he gets closer to you, as you grow in emotional intimacy together, his desire for a physically intimate relationship is going to grow as well.  I can almost guarantee it.  So, in your situation, no, I don’t think you can have a healthy marriage without sex, because your emotional, intellectual, spiritual and all the other facets of intimacy will most likely be limited by your physical one.  There is a reason Paul wrote

Do not deprive one another, except perhaps by agreement for a limited time, that you may devote yourselves to prayer; but then come together again, so that Satan may not tempt you because of your lack of self-control.

Without sex, your husband will have trouble bonding with you permanently.  He may begin to feel unloved, to feel uncared for, and that will make him more susceptible to feeling loved and cared for by someone else…and then you will have a huge risk of adultery in your marriage.

So, does that mean your marriage, should you choose to get married, is doomed?  What about all those people who discover they are asexual after getting married?  I want to address her final statement:

My thinking is that because I have no desire for sex, anytime we did have it would be out of obligation, and it would just be me “giving in” to my partner, which I don’t think is the ideal reason or motive for sex.

This, I think, is a huge trap in our society.  The belief that you need to feel desire in order to engage in sex, and if you don’t, then it’s one sided, that you are just “giving in”.  This is an absolute fallacy that is being pushed very strongly, and it’s leaving a trail of destroyed marriages and a wake of marriages with low sexual health.  I have a few thoughts that I will try to keep brief:

Why do we always think in terms of our spouse taking stuff, or us “giving in” to them.  You should never do anything without your heart being 100% into it.  A lot of times, that means you need to change your heart, not change what you’re doing.  If you’re grudgingly taking out the garbage. Stop.  Change your heart, and take out the garbage, realizing that at the moment, it’s what your can do to serve your family, and do it proudly.

With sex, if your married and your spouse wants sex, and you’re thinking about “giving in”.  Stop.  Change your heart.  Don’t “give in”, but rather realize the impact that this is going to have on their day, on your marriage, and don’t reluctantly have sex, but rather give your all, after all, that’s what they really want, not just sex, but a passionate intimate encounter with you.

Now, I realize a lot of this is theoretical to the questioner, and she has some thinking to do.  To live a life of service to God, or to God and your spouse.  For the rest of us who are married, we already chose.  Time to start living out that choice.

<
Is it okay to use a toy as foreplay? 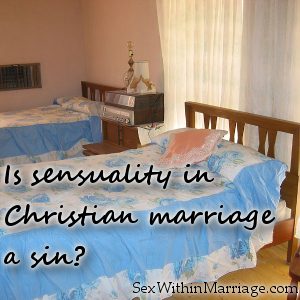 Is sensuality in Christian marriage a sin?
>

43 thoughts on “What do you do if you are asexual?”