What about sex for the surviving spouse?

What about sex for the surviving spouse?

I received a question today that frankly stunned me: Do you have anything on, “What to do if you’re a widow or widowed now”, as now there’s no sexual partner but only desires, what do you do? Thank you It stunned me because, I have 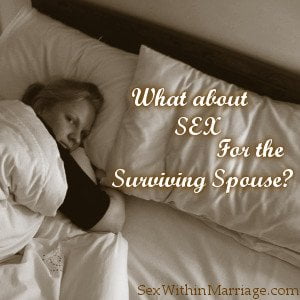 I received a question today that frankly stunned me:

Do you have anything on, “What to do if you’re a widow or widowed now”, as now there’s no sexual partner but only desires, what do you do?
Thank you

It stunned me because, I have not given a single thought to this, and frankly, that’s pretty rare for me.  Usually I have some thought on any subject.  But this time I sort of echoed the question: “Yeah! What DO you do?” What if you are the surviving spouse, and you are used to having a sexual relationship and now it’s suddenly gone?

So, I turn to the Bible, because it is my first source of wisdom.  Then I discussed it with my wife, because she is my second source of wisdom, and she basically pointed me back to the Bible (with suggestions).  And then I thought about it because, well, that’s what I do, and sure enough, more Bible verses came to mind.  So, here’s what I came up with.

But to the unmarried people and to the widows, I declare that it is well (good, advantageous, expedient, and wholesome) for them to remain [single] even as I do.

But if they have not self-control (restraint of their passions), they should marry. For it is better to marry than to be aflame [with passion and tortured continually with ungratified desire].

Now, you can’t discuss this topic without touching this verse, and sadly I think it probably gets dismissed a lot by the widow(er)s because “Well, Paul was single, he didn’t know what he was talking about.”  After all, it’s a completely different story being single and never knowing sex then to have had it and then lost it.  Sort of a reverse of “it is better to have loved and lost…” with regards to ignorance of realized sexual desires.

But, I want to challenge that belief, there is numerous evidence pointing to the likelihood that Paul was married at one point.  From his writings in Greek and the words he chooses to denote widow(er)s and himself, to the fact that he was a Pharisee, and likely considered a rabbi, which would have required him to have a wife, to the sense that he was being groomed for the Sanhedrin, which would have required him to be married. Add to this the Jewish culture of the day, which made marriage and procreation a religious obligation, and no Pharisaic Jewish rabbi, being raised to lead in the Sanhedrin, would not be married at a respectable age.  But, it is clear that Paul was not married during this ministry.  Which means either he was a widower, or that his wife left him when he converted to Christianity.  In either case, he would have known what it was like to have a sex life and then suddenly to not.  So, let’s say he knows what he’s talking about and the Bible is right (which is my general base assumption anyways).

So, what does Paul say in this verse?  It’s pretty simple either:

There is no third option.  It is also discussed that you should not remain celibate if it causes desires which you cannot control.

So, the “Get Married” option brings you back into marriage and back into familiar ground for this blog.  I’m not sure what else to say on that.

The “Stay Celibate” is a bit outside of the regular scope, but I’m going to try and tackle it all the same, because widowhood is an inevitable outcome for at least one spouse in the large majority of marriages.

My desire is to have you free from all anxiety and distressing care. The unmarried man is anxious about the things of the Lord—how he may please the Lord;

And he is drawn in diverging directions [his interests are divided and he is distracted from his devotion to God]. And the unmarried woman or girl is concerned and anxious about the matters of the Lord, how to be wholly separated and set apart in body and spirit; but the married woman has her cares [centered] in earthly affairs—how she may please her husband.

So, one benefit to being single again is that you can focus your energy, time, anxiety, etc on God, on doing His work, on furthering His kingdom.

Let no one be put on the roll of widows [who are to receive church support] who is under sixty years of age or who has been the wife of more than one man;

And she must have a reputation for good deeds, as one who has brought up children, who has practiced hospitality to strangers [of the brotherhood], washed the feet of the saints, helped to relieve the distressed, [and] devoted herself diligently to doing good in every way.

But refuse [to enroll on this list the] younger widows, for when they become restive and their natural desires grow strong, they withdraw themselves against Christ [and] wish to marry [again].

And so they incur condemnation for having set aside and slighted their previous pledge.

Moreover, as they go about from house to house, they learn to be idlers, and not only idlers, but gossips and busybodies, saying what they should not say and talking of things they should not mention.

So I would have younger [widows] marry, bear children, guide the household, [and] not give opponents of the faith occasion for slander or reproach.

For already some [widows] have turned aside after Satan.

If any believing woman or believing man has [relatives or persons in the household who are] widows, let him relieve them; let the church not be burdened [with them], so that it may [be free to] assist those who are truly widows (those who are all alone and are dependent).

Wow.  I doubt anyone in this day and age wants to touch this with a 10 foot pole.  But, you cannot pick and choose scripture.  The bulk of this scripture is talking about providing for the physical needs of widows who have no one to turn to, they can be hired by the church, basically, in exchange for a vow of celibacy (is how I read it).  It is obvious, from the passage, that there is a danger in deciding to remain celibate if you are widowed too young.  Women are built with a desire (some stronger than others) to have children and watch them grow up, and a woman that is widowed early in life may still feel that imperative.  It is not easy to break a vow of celibacy to God, and it is not a vow that should be taken lightly.  But there is a danger as well in keeping a vow of celibacy while having desires tell you you should be doing otherwise.  The young woman could take her frustration out on the people she is supposed to be serving, and thus damage any good will she would have otherwise done.

Shun immorality and all sexual looseness [flee from impurity in thought, word, or deed]. Any other sin which a man commits is one outside the body, but he who commits sexual immorality sins against his own body. – 1 Corinthians 6:18

Now, I think this is great advice for anyone, but these warnings against sexual immorality may be particularly meaningful for those who no longer have a spouse with which to have a righteous sexual union.  Paul warned spouses to not spend too much time apart for fear that the devil will tempt them because of their lack of self-control.  Widow(er)s have a definite handicap here.  There is no spouse to turn to, to rejoin with.  They must be on their guard against such things.  Having a group of single women or men with which to do things, to commiserate when need be, to hold you accountable and lift you up can be a great help in these times.

But [as for] you, teach what is fitting and becoming to sound (wholesome) doctrine [the character and right living that identify true Christians].

Urge the older men to be temperate, venerable (serious), sensible, self-controlled, and sound in the faith, in the love, and in the steadfastness and patience [of Christ].

Bid the older women similarly to be reverent and devout in their deportment as becomes those engaged in sacred service, not slanderers or slaves to drink. They are to give good counsel and be teachers of what is right and noble,

So that they will wisely train the young women to be sane and sober of mind (temperate, disciplined) and to love their husbands and their children,

To be self-controlled, chaste, homemakers, good-natured (kindhearted), adapting and subordinating themselves to their husbands, that the word of God may not be exposed to reproach (blasphemed or discredited).

In a similar way, urge the younger men to be self-restrained and to behave prudently [taking life seriously].

And show your own self in all respects to be a pattern and a model of good deeds and works, teaching what is unadulterated, showing gravity [having the strictest regard for truth and purity of motive], with dignity and seriousness.

And let your instruction be sound and fit and wise and wholesome, vigorous and irrefutable and above censure, so that the opponent may be put to shame, finding nothing discrediting or evil to say about us.

Lastly, I think there is a great task to be done in teaching.  I think we are missing this in our churches.  I cannot say that anyone, when I was growing up, took me aside and taught me how to be self-restrained and to behave prudently.  Likewise, there were no older women from the church teaching my wife how to prepare to be a good spouse.  This is something that is lost to us.  Everyone just minds their business and goes on with their life assuming it will work out.  You can change that.  Get in peoples faces, take the teenagers, and young adults, and newly married spouses out for tea and talk about life, your experiences, your lessons learned the hard way, what is important in life, in marriage.  I think that could be the single greatest impact in our society today.  Our families are being targeted and warn down, but there is too little being done to shore them up.

So, that’s what I found.  I sincerely hope this helps.  Of course, this is me thinking from outside of the situation, I have no way of knowing what the reality is like.  Please, let us know in the comments so we can better understand, and better prepare if this is what’s in store for us.  Teach us young people.

<
You are not alone 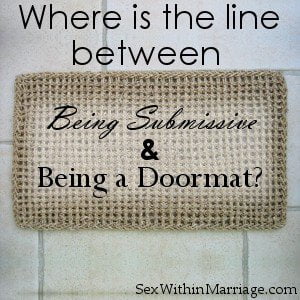 Where is the line between biblical submission and being a doormat?
>

48 thoughts on “What about sex for the surviving spouse?”