For the first 8 or so years of our marriage, we were in constant argument was the frequency of sex. This seems to be common among many Christian marriages.

Why is it a struggle? How do you resolve the struggle?

For the first 8 or so years of our marriage, my wife and I were in a constant argument about sexual frequency in our marriage.  This seems to be a common theme with many couples.  At least the ones who are willing to talk about it.  In fact, I’m not sure I’ve talked to another couple where it isn’t an issue.

Now, I’m not going to get into why it was an issue, that’s a discussion for another post, and another time.  In this post, I want to discuss the issue of the struggle.  Why is it a struggle between men and women?  How do you resolve the struggle about the frequency of sex?

In the majority of cases, the actual sexual frequency doesn’t matter that much.  You hear the same arguments whether a couple is having sexual activity daily, weekly, monthly, or not at all.  At different points in our marriage, we’ve been in each of those categories.

Note: The accepted definition by professional therapists of a “sexless” marriage is having sex less than 10 times a year.  Not quite once a month.

So, if the frequency isn’t the real issue when arguing about sexual frequency, what is?

The real issue is sexual security

Sexual security is the feeling that your sexuality is secure with your spouse.  Let me explain.

For years in our marriage, veto power ruled whether to have sex on any given night.  I believe this is the same in the majority of married couples.  That is, at any given time, if either spouse says “no”, then sex does not occur.  Now, what happens, in these cases, is that the spouse with the lower sex drive is the one who gets to pick how often sex happens.  Not only when, but in what way, where, etc…  This seems to be the standard set by our society.

It should be no surprise then that if this is society’s message, that God’s would be the opposite:

Do not deprive each other of sexual relations, unless you both agree to refrain from sexual intimacy for a limited time so you can give yourselves more completely to prayer. Afterward, you should come together again so that Satan won’t be able to tempt you because of your lack of self-control.

I think many couples know this passage, but not many take the time to realize the implications.  What does this mean?  Do not deprive each other.  Does this sound like a system based on a veto?  I would argue that it does not.  Quite the opposite.  This is a system based on the want, or need, of whichever spouse feels it.  That sex is only to be taken off the table for short times, by mutual consent.

So, what does this look like in a marriage?  I’m not sure I can answer that yet.  I can tell you what it looks like in our marriage, and we’re still trying to figure it out.

We don’t aim for a certain number of times per month or anything like that. Rather the deal now in our marriage is that we go to bed naked.  Every night.  Unless it has been discussed previously that sex is off the table.  Note: we don’t sleep naked.  Why do we go to bed naked?  It’s a symbol.  It means that sex is on the table (not literally, it’s generally on the bed), every night.  This means, that we have sex if one of us wants to.  To put that in the negative: We have sex unless BOTH of us agree not to.  Now I can just hear the complaints, because, well, I’ve had them in my marriage before we changed to this.

We can’t have sex every night!

The big one is generally “My spouse will want sex every night!”  Now, I have two things to say to that:

The first is “So what?”  Now, except in some extreme cases, people generally enjoy sex.  If you don’t, then sometimes one spouse has to spend some time learning.  Either learn how to help their partner or learning what they like themselves with their spouse.  Do you know what helps this?  More practice (read: more sex).  Practice leads to improvement.  What have you got to lose?

The second is that, yes, your spouse may want sex every night.  For a bit.  Let me tell you what happened when we started this.  About a year ago, we participated in a “7 days of sex” challenge.  This was about the time that we were starting to reform our marriage.  We decided to try 7 days of sex straight.  This was an easier sell than “sex whenever I want”.  We ended up having sex 12 days in a row!  We had a one-day break, and then did another 10 days in a row!  It transformed our marriage.   The intimacy it produced revitalized our marriage.  It hasn’t been the same since.

At this point we hadn’t quite figured out the “sex is on the table every day” ideal yet.  We were still in a pendulum swing from the low-frequency sex lifestyle we had come from.  Over time, it slowed down.  We seem to have settled at sex every 2-3 days.  Why?  Why aren’t we having sex every night?  I always thought that’s what I wanted.  During the many years of our struggle about sexual frequency, that’s what was in my mind.  Sex every day, multiple times a day.  That was my “perfect” scenario.

Well, we tried sex every day.  We even had a few “couple times” a day.  You know what I found out?  It’s too much for me!  I think in the end my ideal is two out of every three days.

I heard a story in a sermon once about a family who adopted a boy.  I don’t remember it verbatim, but I will try to relay the message:

When they adopted the boy, some of his behaviour confused them.  The kid was always hiding food.  He never ate all his supper, but always saved a bit, in his pockets, pieces of bread, cheese, whatever.  After a while, they finally figured it out.  In his previous living situation, the boy was never sure where the next meal would be coming from.  He didn’t know if there would be food in the morning, or at the next lunch, or supper.  So, he stashed food worrying about the future.  It took a while to realize that there would always be a next meal.  That there were snacks.  That the pantry was full, and so was the fridge.  That the boy would never have to starve again.

I realized that I was like that boy.  I felt that I had been “starved” for long, that I had no security about when my next “sexual meal” would take place.  So, I always felt like I wanted sex daily, or many times a day.  When we did that 7 days of sex challenge, I gorged myself.  We had sex 12 days in a row, a one day break, and then another 10 days in a row.  Why?  Because I didn’t trust that there would be supper tomorrow.  Slowly, I learned that I didn’t need to worry about it.  I stopped being anxious about when the next sexual encounter would be.  Eventually our sexual frequency leveled off.

So, why aren’t we having sex as frequently as at my ideal if in the end, I have the power to do so?  Because now that I’m not “starved” for sex, now that my needs are being met, I can focus more on my wife’s wants.  There are nights I know she wants to go to bed.  I know she wants to go to bed more than I want sex.  So, we sleep instead.  And I am content with that.  Why?  Because I know, for a certainty, that if I said “I need sex”, she would be willing.  Because I can have that security, I don’t need to actually have sex every time I feel the desire.

This simple change, from “veto power” to “assume sex” has changed something fundamental in our marriage.  In our society, sex has been something that women use to control men.  I believe this is contrary to God’s will as well.

…you wives should submit to your husbands in everything. For husbands, this means love your wives, just as Christ loved the church.

I’m not going to start an argument about submission and headship here.  But I wanted to just bring this out to touch on a point.  That the Bible doesn’t advocate for marriage, sexuality, or anything as being a method of controlling someone.  I believe one of the core teachings of the Bible is that free will must reign supreme.  A marriage without free will, a marriage that includes control of one spouse by another is not in keeping with God’s will. 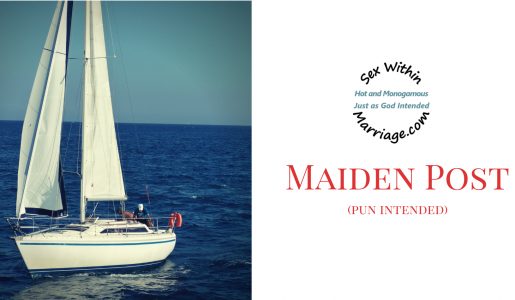 43 thoughts on “Sexual Frequency: Why I Don’t Worry Anymore”